Orenda Café Is a New Favorite 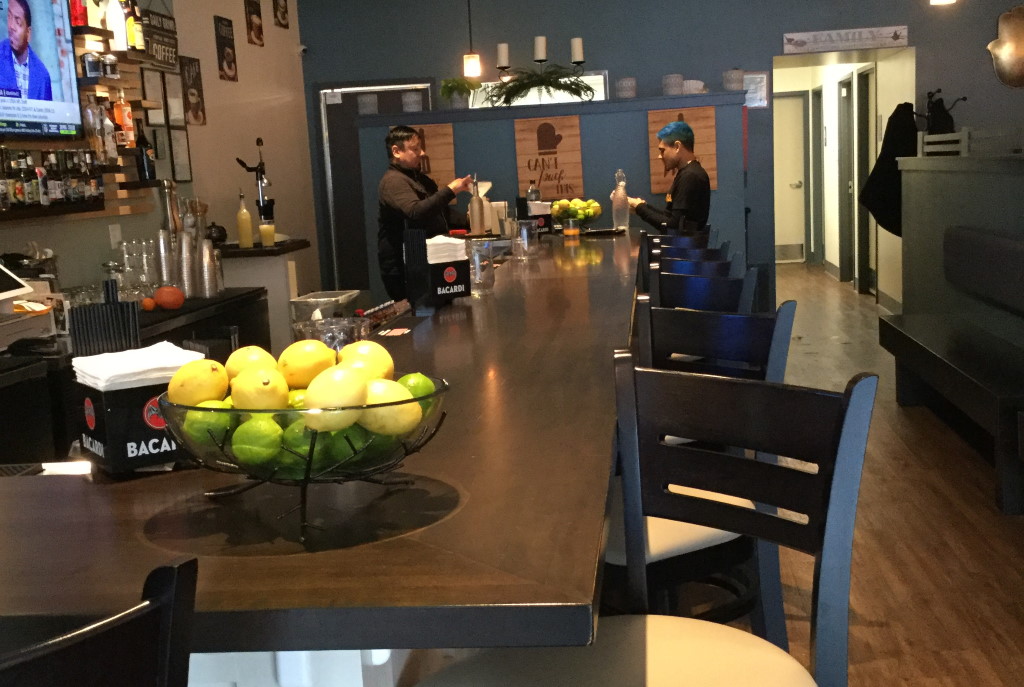 Orenda Café opened this year on National Avenue just west of 35th Street. Two visits, that’s all it took, and Orenda made my list of outstanding restaurants for breakfast and lunch. This is not to suggest everything my companions and I consumed with grand enthusiasm was perfect, but overall, its menu, mainly composed of Mexican-inspired dishes, has something to please almost everyone.

Orenda is located in a building with a long history. A hair salon once resided there followed by the Silver City Café. After the café closed, the space sat empty for 12 years until Leticia Munoz, owner of Michael’s Family Restaurant on Wisconsin Avenue, took over the space. “It was in terrible shape,” said General Manager Crispin Ramirez. I took that as an understatement.

Together Munoz and Ramirez transformed the space. Now it’s a cross between a diner and a traditional restaurant with high top tables facing the front windows, several booths and four-top tables, and seating at an extended bar. It has a clean, classy, contemporary look, enhanced by pale blue accent walls, black and tan tables and chairs, and to liven the neutrals, maroon colored cloth napkins.

As for the name Orenda, according to Ramirez, it’s a word derived from the Iroquois people, loosely translated as the mystical force in everyone that has the power to create change in themselves as well as others. 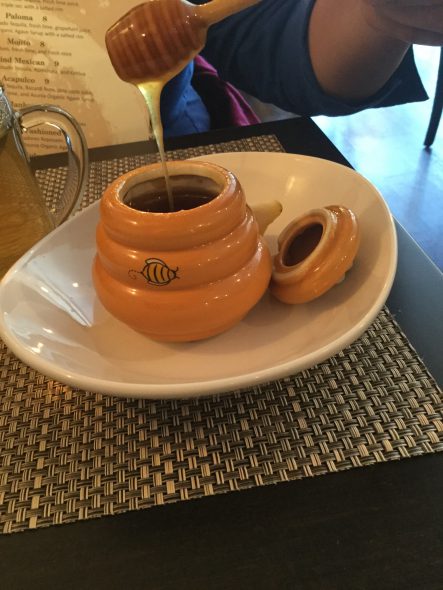 The menu at Orenda leans more toward breakfast than lunch with a variety of omelets, bowls, benedicts, pancakes, and French toast. On a first visit I followed our server’s lead and ordered his favorite, Smoked Chicken & Poblano Skillet. On top of too many uninspired breakfast potatoes, the chef layered too few strips of poblano peppers, melted swiss cheese, pico de gallo, the chicken, hollandaise, and my choice, scrambled eggs. The dish could have been improved if the hollandaise had been draped over the eggs instead of mingled with the melted cheese. The pulled chicken, plenty of it, was juicy, but overall, the dish came off as more about quantity than quality. On the plus side, and this is an impressive detail, they served the strawberry jam and the butter in individual metal cups instead of the usual wrapped brick of cold butter and packaged grape jelly. They also serve tea in a lovely teapot along with a personal honeypot.

My companion’s Carnitas Con Salsa Omelet, a three-egg omelet stuffed with carnitas, left no doubt that the chef knows how to maximize the flavor of the pork. Because the meat was so delicious, on a subsequent visit, at my recommendation, a companion ordered the Carnitas Hash. This time that same pork in a bowl along with pickled radish, spinach, roasted cauliflower, toasted pecans, two poached eggs, and roasted onion sauce, was a balanced mix of textures and flavors. The pecans left a sweet memory, while the pork became the center of the hash, leading us to decide the carnitas belonged in a bowl, not in an omelet.

The Daily Soup, Vegetable Barley, had the basic mirepoix, as the French call a diced vegetable base: carrots, onions, and celery, with lots of tender barley, making a soup I could eat every day, hearty and healthy, with deep veggie flavors.

To accompany the soup, I chose Roasted Cauliflower Salad. This complex mix of roasted corn, tomato, edamame, sprouts, a mix of young lettuce and baby spinach, had some, but not enough roasted cauliflower, and was dressed with a tart apple-lime-cilantro vinaigrette. Like everything we ordered at Orenda, this salad could easily satisfy two at lunch, especially if it was preceded by a cup of the daily soup. It was also too good to share. It defined what a salad should be, a complementary mix of disparate ingredients combined with a spicy vinaigrette.

For the most unexpected dish we tried, Cucumber Salmon Ceviche, the chef marinated fresh salmon in lime, sliced it, put it in a bowl with chunks of cucumber, avocado, thinly sliced red onion, cilantro, and pico de gallo. Tortilla chips made handy scoopers. Spicy heat from the pico de gallo, added to the cool flavors in the bowl, made each bite a roller coaster of sensations. This dish alone gave us a reason to celebrate the recent arrival of this restaurant with its diverse collection of Mexican-inspired dishes alongside more traditional wings, sandwiches, and a Poblano Swiss Burger.

While I waited for my companions to join me, a diner left an adjacent booth, stopped and said, “I hope you’re hungry. You get a lot of good food here.” 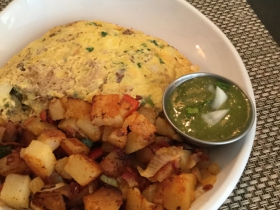 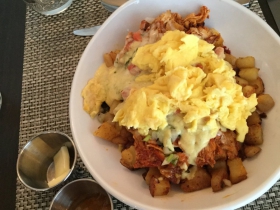 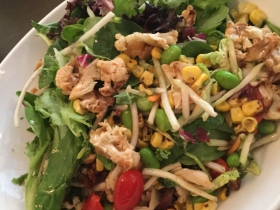 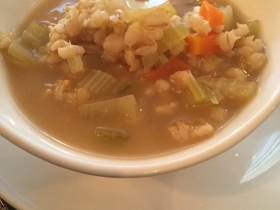 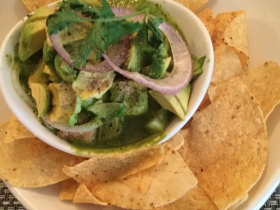 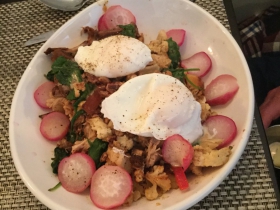 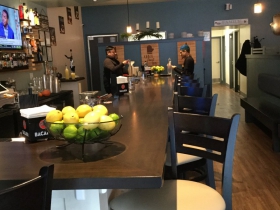 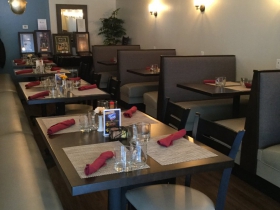 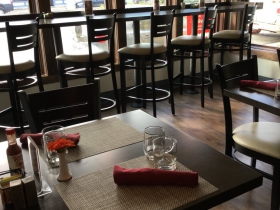 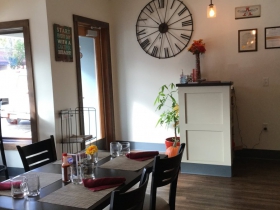