National report shows where your dollar goes the furthest. 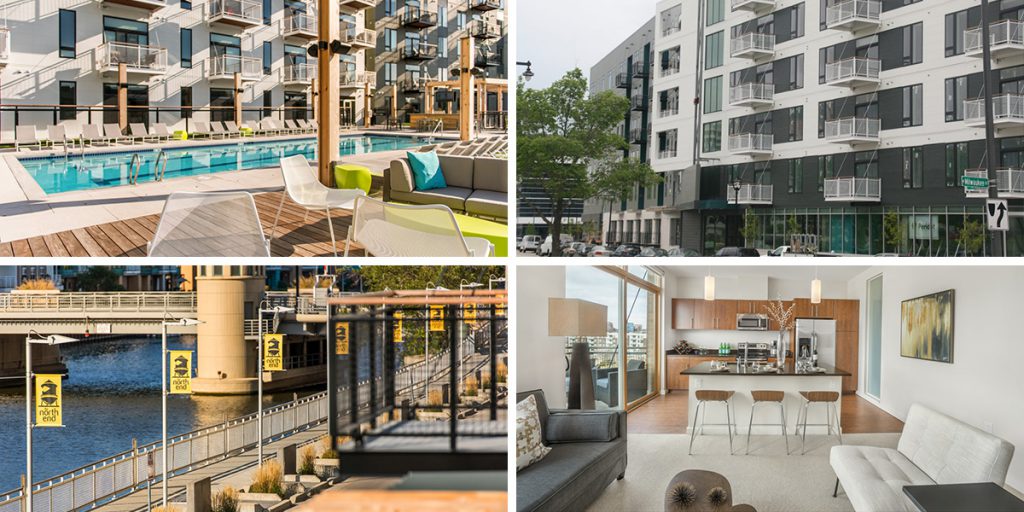 Leading the way in Milwaukee is the 53203 zip code, which includes Westown from Fiserv Forum south to the Milwaukee Intermodal Station. The area has seen a number of new apartment projects in recent years including The Buckler, MKE Lofts, 735 West, Plankinton Clover and Germania. Average rent in the area is $1,689 per month.

Next on the list, and seventh overall, with an average monthly price of $1,446, is the 53202 zip code which includes the city’s traditionally hot apartment corridor from E. North Ave. south to the bottom of the Historic Third Ward. A wide range of apartments are found in the zip code including a number of older buildings as well as many new buildings such as DoMUS, Urbanite and Aperture.

According to RentCafe, the study relies on apartment buildings with 50 or more rental units located in over 130 US markets to aggregate the data. A total of approximately 15 million rental units were included in the calculations. The data is from RENTCafe’s sister company Yardi Matrix and is current as of July 2019.

Immediately following 53202 in the Wisconsin ranking is the 53213 zip code ($1,418) which encompasses a sliver of the city’s far west side and a substantial section of Wauwatosa, but is still labeled as a Milwaukee zip code in United States Postal Service records. The zip code’s inclusion has more to do with the substantial number of apartment buildings on W. State St. in Wauwatosa instead of the homes located south of W. Bluemound Rd. that are in the city proper, but not big enough to be included in the survey’s methodology. 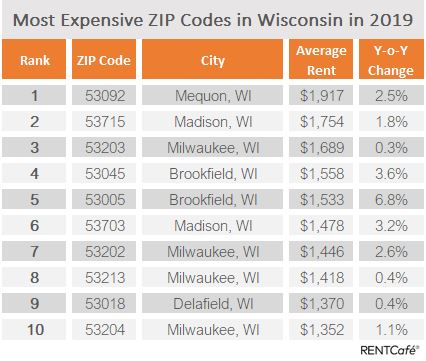 Most expensive zip codes for renters in Wisconsin. Image from RENTCafe.

Tenth overall is Milwaukee’s 53204 zip code which includes a diverse selection of south side neighborhoods including Walker’s Point and Clarke Square. The zip code runs west from S. Layton Blvd. east to the lake from the north tip of Walker’s Point near W. Pittsburgh Ave. south to W. Becher St. It includes a substantial amount of new construction on its eastern edge as well as many duplexes, carriage units and other housing options further from the lake. Average rent in the 53204 zip code is $1,352 according to RENTCafe’s methodology.

Looking to save money on housing? Move to Kansas. Four Kansas zip codes appear among the 10 cheapest, including 67213 in Wichita at $423 per month.

2 thoughts on “Eyes on Milwaukee: Most Expensive Milwaukee Zip Codes for Renters”