It’s hard to get closer to the middle of Downtown than the intersection of W. Wisconsin and N. Plankinton avenues. Yet, despite being in the middle of the action, the seven-story Posner Building sat almost entirely vacant for years. Not anymore.

Built in 1908, the building’s sole tenant was Mo’s Irish Pub until a recent renovation by HKS Holdings. That renovation turned the building’s upper floors, previously office space, into 105 apartments known as the MKE Lofts. Work was completed in the fall of 2015, and MKE Lofts had its first residents in September.

Design work on the project was led by local architecture firm Engberg Anderson. The apartments have a distinctly modern look and feel to them, but the building maintains much of the original tile and iron work. This is most visible in the common spaces where things like the original staircase and elevator lobby have been cleaned and restored. A number of units also have artifacts of the building’s earlier use including portions of the original, tiled floors.

The apartments are managed by Siegel-Gallagher. The property management firm has earned their keep on this project, with over 90 percent of the units leased as of March. A strong showing for a building that opened just before the more difficult winter leasing season. Leasing for building’s large studios starts at $1,000, with two-bedroom, two-bathroom units starting at $2,000.

Tenants will find a number of available in-building amenities, as has come to be expected in new, downtown apartment projects. An amply-sized fitness center is available on the building’s second floor. In addition, a large club room is available for tenants around the clock. That space is available to reserve free of charge. Tenants pay a one-time amenities fee as part of their lease for access to the spaces. The building is also pet friendly, so residents with dogs or cats are welcome.

Mo’s Irish Pub is owned by Johnny Vassallo, who maintains an equity stake in the redevelopment of the building. Those who have been to the pub know things can get a bit loud, which led the development team to make sure the multi-level tavern was well-insulated from the apartments. As part of the redevelopment Mo’s is adding a beer hall in the building’s former lobby and a new bar dubbed “Wisconsin Tap Room” along the building’s Plankinton Ave. side.

Contracting work on the project was led by KBS Construction. KBS is led by Dennis Klein whose son Joe is a partner at HKS. In addition to Klein, HKS is led by Tyler Hawley and Kyle Strigenz. The firm is quickly making a name for itself in Milwaukee, having developed the Global Water Center in Walker’s Point, the soon-to-open Kimpton Hotel in the Historic Third Ward and two apartment projects, the 72-unit Dwell Bay View and 50-unit Junior House Lofts. The firm is working to develop the second Global Water Center on W. Florida St. 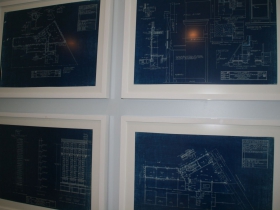 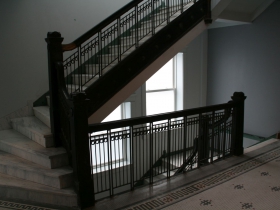 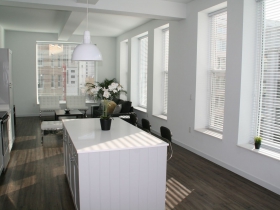 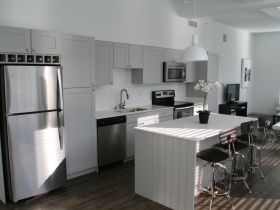 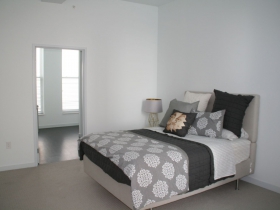 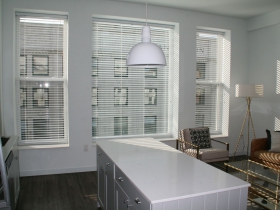 Originally known as the Caswell Building after early Milwaukee settler Napolean Bonaparte Caswell, its construction started in 1907 and concluded in 1908. The building was designed by the firm of Van Ryn and De Gelleke for Commonwealth Realty Trust Co. who held a land lease from the Caswell family. It was notable at the time as the first building in the Midwest to be made from poured, reinforced concrete.

The building was owned by Arthur J. Straus from 1925 until 1964, and ultimately was acquired by the Posner family in 1966. The family renamed the building after themselves in 1982 during the building’s 75th anniversary party.

The large windows that wrap the building, 664 of them in 75 different sizes, have been painstakingly replaced. Their size is due to the building’s original intended use, a department store.

The building has had plenty of tenants, but a department store was ironically never one. During my tour of the project Tyler Hawley noted that McDonald’s was among the countless tenants to come and go, and holds the distinction of being one of the first urban restaurants to close among the chain’s thousands of restaurants.

Another notable tenant along the way was the Miller Brewing Company, which operated the College Inn on parts of the first-floor and basement. Remnants of the restaurant were found by the development team during the apartment conversion.

Close observers of the building will note that it’s not uniform in height. That’s due to a nine-story 1913 addition to the north. That addition is fully integrated into the building, with the upper floors serving as penthouse apartment units.

The original front door of the building will soon be part of Mo’s Irish Pub beer hall. It still maintains its charming design flourishes, two gargoyles that guard the entrance and display the date of the building’s construction start (19 – 07). They’ve been long known as “Charlie” and “McCarthy,” but are now looking much cleaner than in the past.

What sent the retail portion building into decline? A 1982 newspaper article hints at the building’s challenges competing with the new, indoor Grand Avenue Mall. The building’s owners at the time were publicly pining to be connected to the skywalk system to boost traffic, which never happened. Should the recently unveiled plans for the Shops of Grand Avenue move forward, it looks like the two buildings will work setup to together this time.

As with many adaptive reuse projects, the financing for the project was quite complex. Because the project was in part publicly financed with a tax-incremental financing (TIF) district, public records provide a more detailed look at the inner-workings of the project’s financing. At the time of the TIF district’s creation the project was estimated to cost $23.5 million, with financing from a number of public and private sources.

The Wisconsin Housing and Economic Development Authority provided a $13.75 million loan to the project, in exchange for the developers setting aside 20 percent of the units for those that make under 80 percent of the county median income. The state’s Wisconsin Economic Development Corporation also provided a $500,000 grant to the project. To secure the funding the developers had to provide $1.4 million in equity.

The city assisted by creating a $2.5 million developer-financed TIF district for the project. The developer-financed TIF district places almost all the risk on the developer themselves. The developer (HKS) fronts the money, and is paid back in a set time period by incremental taxes on the property (assessed in 2014 at $3,425,000). If the property doesn’t end up with a higher assessment, the developer won’t get all of their money back. It’s a complex way of issuing a property tax break to make a project feasible that otherwise doesn’t pencil out on a spreadsheet. It’s also a safe way for the city to stimulate development on W. Wisconsin Ave., something mayor Tom Barrett created a task force to do in 2011.

The TIF district was awarded to the developer to help finance what the city deemed “extraordinary costs associated with rehabilitating the facade of the building to historic standards, improving the storefront facades and whiteboxing the first floor retail space.” Original estimates from the city had the district being retired in 17 years, after which incremental taxes would flow to the property taxing entities.

The developers were able to take advantage of $5.33 million in historic preservation tax credits from the state and federal government. Those credits can be used either used to offset income from the development team or sold to larger firms.

In addition to Johnny Vassallo, Impact Seven is also an equity partner on the project.

One thought on “Eyes on Milwaukee: Inside the MKE Lofts”