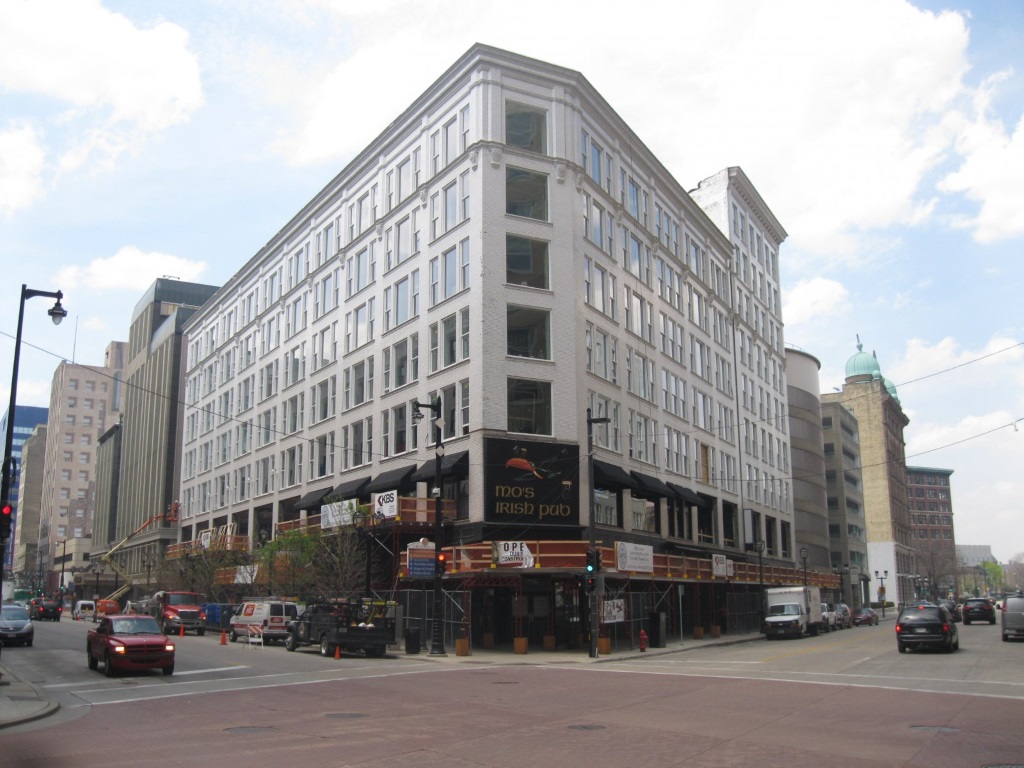 Mo’s Irish Pub is soon going to have neighbors. Renovation of the long-vacant Posner Building is moving swiftly ahead under the guidance of developer HKS Holdings and general contractor KBS Construction. When the renovation is finished the building will contain 105 apartments, 20,000 square-feet of street-level retail space and long-time tenant Mo’s Irish Pub. The design of the renovation is being led by Engberg Anderson.

Financing for the project for the approximately $23.5 million project comes from numerous sources. WHEDA is providing $13.75 million in the form of a loan (while ensuring that 20 percent of the units are set aside for those that make under 80 percent of the county median income), $5.33 million in historic tax credits are being awarded, WEDC is providing a grant of $500,000, the developers are contributing $1.4 million in equity and a developer-financed tax-incremental financing (TIF) district will provide an additional $2.5 million.

The developer-financed TIF district places almost all the risk on the developer themselves. The developer (HKS) fronts the money, and is paid back in a set time period by incremental taxes on the property (assessed in 2014 at $3,111,000). If the property fails to generate enough income and doesn’t end up with a higher assessment, the developer doesn’t get all of their money back. It’s a complex way of issuing a property tax break to make a project feasible that otherwise doesn’t pencil out on a spreadsheet. According to Dan Casanova at the Department of City Development, DCD agreed to the deal not for the apartments, but to help finance the commercial space and facade repairs.

Formerly known as the Caswell Building, the building occupies the northwest corner of the intersection of W. Wisconsin Ave. and N. Plankinton Ave. It’s a highly visible, marquee location downtown. The bulk of the building is seven stories and was built in 1908, with a nine-story addition built in 1913. It was originally designed by architects Van Ryn and De Gelleke. The name was changed in 1982 when the father-and-son team of Gene and Jeffrey Posner renamed it (they had bought the building in 1966). The original name comes from the man who built it, Napolean Bonaparte Caswell. Now that’s a name.

For all the talk of what to do with W. Wisconsin Ave. ranging from a new arena to rotating public art, the Posner Building project seems poised to actually transform the street. The city’s approval of a developer-financed $2.5 million TIF district will add over 100 residents to the immediate area, increase the city’s tax base and bring to life a highly-visible, mostly-empty building.

Our photos capture the project at midpoint, with nearly all of the new windows installed and the first-floor wrapped in scaffolding. 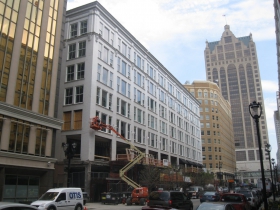 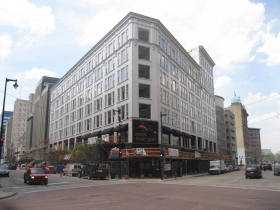 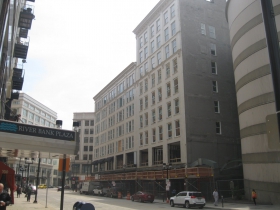 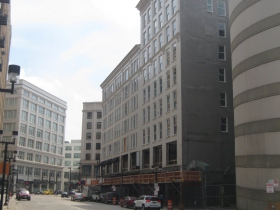 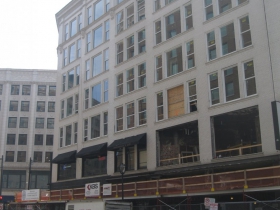 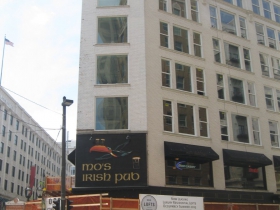 One thought on “Friday Photos: Presenting the Posner Building Apartments”