Steve Marcus’ plan to bring world class sculpture to Milwaukee is expensive. Is it a good idea?

At first glance, Steve Marcus’s proposal to bring world-class public sculpture here for exhibition on Wisconsin Avenue might seem a cheap way to bring great art to a historically thrifty city. After all, the idea envisions internationally-known artists donating their work to be exhibited. But, in fact, to do this right would probably cost in the neighborhood of $1 million a year, as both Marcus and Milwaukee Art Museum director Dan Keegan told me.

Where will the money come from? This is one of many questions that hasn’t been explored. A recent story on the proposed project told readers the downtown business improvement district agreed to work on the project, but that’s the only the beginning to a proposal that could be very difficult to achieve. Marcus compared the idea to the successful Cows on Parade exhibit in Chicago in 1999, but what he is proposing — monumental public sculpture by internationally-known artists — is actually a far more complicated idea. It will take a lot of work — and a major financial commitment from Marcus and the private sector — or it won’t happen. 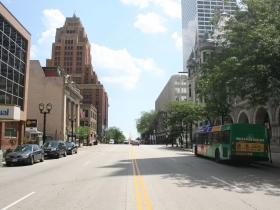 Marcus said he first began discussing the idea four years ago. His company has a big stake in Downtown, with two hotels on Wisconsin Avenue. The project, he says, “is a piece of the puzzle. How to reinvigorate Wisconsin Avenue. This could get people to come Downtown and see that Downtown is really a nice place to be.”

But years ago, “the timing was lousy, the economy was so bad,” Marcus notes. So he waited, while discussing the idea with others, including Keegan, who had the idea of presenting the art on a rotating basis, as part of an annual, biennial or even triennial exhibition. “The beauty of that is, you hope people will come Downtown at least once every time we change the show,” Marcus notes.

Marcus felt the art museum’s involvement was critical to make sure the exhibition was properly curated. He wanted great art by renowned artists. Visit Milwaukee CEO Paul Upchurch has made a comparison to the art on the Riverwalk, but Marcus notes, “these are not internationally-known artists,” and he and Keegan both emphasize they are aiming much higher. “We want world-class art and it must be well-placed and on the right site,” Keegan says.

But how likely is it that internationally-known artists would loan one of their works for exhibition outdoors for six months (May through October) or so? Keegan points to Manhattan’s public art project, which shows works on loan.

Milwaukee, of course, is not Manhattan, but Keegan and others note that large-sized sculptures are expensive to transport and therefore don’t get shown much. “Sculptors like to see their art placed, so the opportunity to get it shown can be a real advantage for them,” Keegan says. “Galleries would be in the same place” — and thus willing to loan a work they are trying to sell.

But Polly Morris, director of the Lynden Sculpture Garden, says Marcus “may be misled in that internationally-known artists will be willing to lend their work for nothing.” She calls it an intriguing, ambitious idea but says it could encounter a lot of obstacles.

Marcus says the proposition of getting loaned works needs to be tested. “If we were able to establish the feasibility of being able to get the pieces on loan,” then, he says, it might take as little as two years to put together the first exhibition.

But the very reason that artists might be interested in loaning works — because the high cost of shipping and mounting works means they seldom get shown — could make this a very dicey proposition.

Then there’s the cost of installing the art. You may need police to block off a street, so a crane can lift the art off a truck and into place, she notes. You need to put down a sculpture pad on which the work is mounted and the sidewalk below this must be strong enough to support all the weight.

Then the process is repeated in reverse when the art work is removed and shipped back. These costs are often overlooked, Geigel Mikulay notes. There are works on the RiverWalk and in the Third Ward that were supposed to be temporary but were never taken down because there was no money for this, she adds. “They wind up getting abandoned or orphaned.”

She also questions whether there is sufficient space on Wisconsin Avenue to properly place large works of art. “Part of how monumental sculptures work is in terms of the space around them. You need the kind of viewing perspectives we associate with monumental art works.”

Moreover, some of the sites on Wisconsin Avenue that might work already have public art installed on them. 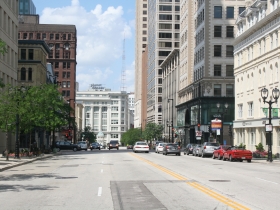 All of these issues, as well as the cost, could be somewhat less daunting as you reduce the size of the works. Keegan envisions a mix of art works that might include some smaller sculptures, “new media sculpture” and “projector pieces.” He envisions a committee of curators picking an interesting mix of works, along with citizen participation, with perhaps a “people’s choice” award for each exhibition and perhaps some money allocated to buy one of the works from each festival.

But creating this festival from scratch, and spending enough to market it properly, will still be an expensive proposition. “I think you want to be in the million-dollar range to do it well,” Keegan says. “That’s not an unreasonable number,” Marcus says. Moreover, you’d need a commitment of funding for several years, Keegan adds.

But the county is currently trying to reduce its annual contribution to the Milwaukee Art Museum and War Memorial, and the city has been hammered by nearly a decade of huge cuts in state-shared revenue. Ald. Nik Kovac salutes the Marcus proposal as “a great idea” but changes his tune once the issue of city support comes up.

“If you’re talking about a privately-supported project, I’m all in,” he says. “But once you start to talk about public money then we have to get out our list of priorities.” If Kovac is dubious, that’s a bad sign, as he is far more supportive of public art than most members of the Common Council.

Mayor Tom Barrett has indicated his support of the project but hasn’t committed any city money. The city, of course, could provide other key support, from providing a police presence for installing sculptures to handling sidewalk improvements that might be needed to provide proper siting for sculpture. But direct funding of the project by the city seems unlikely.

I’ve been told that Marcus sees this as something that might be his last major legacy to Milwaukee. If so, he may need to make a major gift to make this happen. Even then, this proposal won’t be easy to pull off, but without such a pledge it hasn’t a chance.