Can Wisconsin Avenue Be Saved?

A city task force hopes to revive the street but the obstacles are many.

More than two years ago, a task force of business leaders was set up by Mayor Tom Barrett to look for ways to “breathe new life” on Wisconsin Avenue west of the river. The task force is led by Godfrey & Kahn real estate attorney Steve Chernof, and includes many Downtown stakeholders.

Meanwhile, Marcus Corp executive Steve Marcus has proposed a $1 million effort to have rotating exhibits of “world-class” public sculpture on the Wisconsin Avenue, as a way of enlivening the avenue. And a group of arts lovers has proposed reclaiming the old Warner/Grand movie theater (212 W. Wisconsin Ave.) and turning it into an arts center.

These are separate efforts, but together they outline the importance of what was long the city’s most-important retail street, but has been in decline for at least 20 years. The biggest problem is arguably the Grand Avenue Mall, which often seems like a ghost town, though the second-floor food court attracts customers and activity. 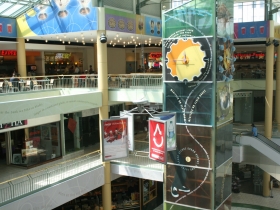 Pabst Theater executive director Gary Witt, who brings lots of people Downtown through his management of the Pabst, Riverside Theater and Turner Hall, points to the loss of Daly’s Pen Shop which operated Downtown for decades and will leave the mall in December, consolidating operations at its location on 77th and Burleigh. “To me it’s sad that we Downtown stakeholders as a group couldn’t save the pen shop from relocating.”

But there are also other dead spots, both across the street from and west of the mall.

There’s a perception problem regarding the area, says Ald Nik Kovac, and “perception is reality.” Investors are far more interested in developing on East Wisconsin Avenue and office space costs more east of the river.

About a month ago, Chernof’s group had a two-day retreat to brainstorm ideas.

He says the group is coming up with lots of “great ideas.” Downtown Alderman Robert Bauman is less impressed, and says many of these ideas are too expensive or have been tried before.

Both Bauman and Kovac argue that Wisconsin Avenue is actually in better shape than many people think. For starters, they note, the city spent millions on streetscaping to improve the look of the avenue. “Take a look,” Kovac says. “There are nice planters, nice flowers, smooth sidewalks, it looks fantastic.”

“West Wisconsin doesn’t need radical surgery,” he adds. “There are some great historic buildings there. You just have to fill in a few gaps.” 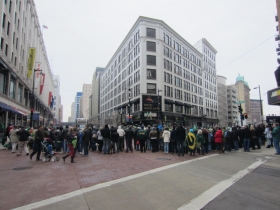 The biggest gaps, the aldermen say, include the long-empty Posner Building (152 W. Wisconsin Ave.), the surface parking lot on 4th Street across the street from the convention center, and the lot on 8th street across from Central Library.  There was also considerable discussion at the retreat about the old Grand Theatre (212 W. Wisconsin Ave.), which has also been mostly empty for many years.

The result of the retreat, Chernof notes, was to create three action teams to pursue ideas on housing, public spaces and the kinds of businesses that might be attracted to the area. That offers a clue to what are seen as possible ways to revive West Wisconsin Avenue. That includes:

The question of age did seem to hover over the two-day retreat. “There were maybe three people under the age of 35 there,” Bauman says.

When you look at redeveloped areas like Brady Street or Bay View, much of the emphasis is on bars and restaurants with appeal for younger patrons. Savvy developers like those at Colectivo (formerly Alterra), Mike Eitel and the Lowlands group of restaurants and Scott Johnson and Leslie Montemurro have developed places all over town that bring great activity to the street.

The demographic they tend to serve is also a huge part of the patronage for Witt’s three concert venues which regularly bring crowds Downtown — customers who might well linger if there was a supportive scene of the right bars and restaurants. Rather than trying to rebuild downtown around a failure like the Grand Avenue Mall, why not build around the most obvious success?

One overlooked issue: The traditional way for a city to get people Downtown is through tourism. Is Milwaukee’s tourism office, Visit Milwaukee, doing a good enough job attracting conventions to the city? No, answers Gary Witt. “This city is going through changes at a rapid pace and Visit Milwaukee is not changing along with it. The convention center hasn’t been successful at bringing people downtown.” 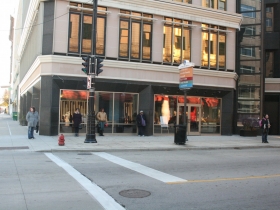 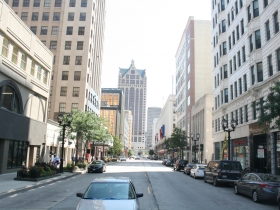 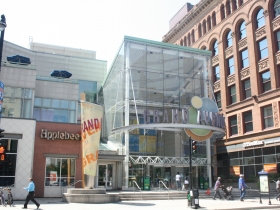 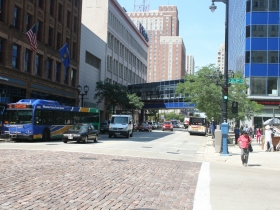 48 thoughts on “Murphy’s Law: Can Wisconsin Avenue Be Saved?”