Is Milwaukee the Next Detroit?

After the news of Detroit’s bankruptcy, I got an email from a reader wondering if Milwaukee was next. “How bad would it have to be before Milwaukee was eligible for bankruptcy?”

That’s the ultimate nightmare. Milwaukee, after all, ranks fourth in 2011 among big cities in the proportion of children — 43 percent — living in poverty, compared to first place Detroit’s 57 percent.

Milwaukee Mayor Tom Barrett opened the door to the Detroit comparison in his attempt to kill the state law ending city residency requirements. “If we want the tax base of Milwaukee to resemble the tax base of Detroit, this is the way to go,” he warned.

The city is fighting the new state law in the courts, but if it loses, will that push us closer to Detroit? It clearly won’t help, but the overall picture for the city is far from bleak. Indeed, there are increasing signs that Milwaukee is undergoing something of a renaissance. 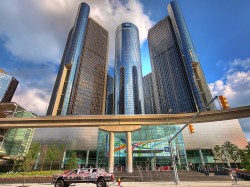 To begin with, Milwaukee has far lower unemployment, 7.3 percent, than Detroit’s 9.0 percent. Milwaukee is exactly at the national average for unemployment, with a lower rate than in such cities as Indianapolis, Cleveland, Sacramento, New York, Philadelphia, Atlanta, Los Angeles, Chicago, Las Vegas and Memphis.

Milwaukee, in fact, stood out as the best large city in America when it comes to increasing jobs within three miles of downtown, according to a recent study by the Brookings Institution. Between 1998 and 2006, the study found, 44 of 45 large cities saw a decrease in the percentage of its jobs located within three miles of their central business district. Milwaukee was the only city that saw an increase.

How did Milwaukee manage this feat? The biggest factor was probably the development of the Menomonee Valley, which over the past 15 years reclaimed more than 300 contaminated acres and created 4,700 jobs.  That development was the idea of Mayor John Norquist, but as Barrett’s chief of staff Pat Curley notes, Barrett as a congressman was able to secure millions in federal funds for brownfield redevelopment, which made the development possible. And Barrett has worked to woo many of the businesses that moved to the valley.

Nearly as important was Manpower’s decision to move its headquarters to downtown Milwaukee, which brought more than 900 jobs here. That was a victory for Barrett, who offered the company Tax Incremental Financing as a sweetener.

Milwaukee is far different than Detroit in developing jobs near its central business district. Among the 45 largest cities, the Brookings study found, Detroit is the most decentralized, with more than 77 percent of its jobs located more than 10 miles from its central business district, compared to an average of just under 50 percent for large cities. But in Milwaukee the comparable figure is just under 38 percent — lower than all but a couple big cities.

Milwaukee has also begun to outdo other cities in attracting college graduates. A USA Today analysis of Census Data found there was a big increase in college grads flocking to cities from 2006 to 2011. The average increase in cities was 17 percent but it was 45 percent in Milwaukee, bigger than in all but one (San Antonio) of 20 cities the newspaper measured.

And the Census data showed that 80 percent of these college grads moving to cities had gotten jobs. Yes, many may be working in restaurants and bars, but they are earning money that circulates through the local economy. Consider the amazing explosion of restaurants, bars and other retail in Bay View or on Brady Street and you can see the impact of younger residents. We are rapidly reaching the point where, from the north end of the East Side to the far south end of Bay View, an entire stretch encompassing Riverwest, Brewers Hill, East Town, the Third Ward, Walker’s Point and near South Side, are going through redevelopment. This is a major good news story for Milwaukee.

But there still remains another city in Milwaukee that is mired in poverty with high rankings on what you might call the misery index: all the bad things that spring from high poverty, including higher infant mortality, teen pregnancy and crime.

But the health department has worked with local health care systems and social service agencies to combat infant mortality. The result has been a huge reduction in the rate: infant deaths dropped steadily from 140 in 2006 to 96 in 2012.

The campaign to reduce teen pregnancy — where the city health department has worked with United Way, health care providers, community and faith-based organizations — has been even more successful. The pregnancy rate per 1,000 teen girls has dropped from 52 in 2006 to 33 in 2011.

Under the leadership of Police Chief Ed Flynn, who has a national reputation as a law enforcement tactician, Milwaukee has also seen significant decreases in crime.

When analysts comment on the demise of Detroit, they point to several causes. One is an over-reliance on one industry: automobiles. Milwaukee remains heavily reliant on manufacturing, but within that sector there is far more variety than Detroit had.

Analysts also suggest Detroit had unaffordable government worker pensions. But a study by the Pew Charitable Trusts actually shows Detroit actually had funds set aside to pay 93 percent of its pension liabilities, which was better than in many cities. No city, however, compared to Milwaukee, which actually has a surplus, with 113 percent of its funding liabilities paid for, better than the 60 other cities examined by the study.

A fourth factor, some suggest, is poor government leadership. Some have tried to attack Milwaukee in that regard, accusing it of profligate spending. But compare the leadership of Mayor Norquist, under whom the city budget rose slower than the rate of inflation, to that of Governor Tommy Thompson, under whom the state budget rose two-and-a-half times faster than inflation. Since then every governor has reduced state shared revenue to Milwaukee, even as the state budget has grown. As Standard and Poor’s last assessment of this city notes, “Milwaukee’s financial operations are constrained by decreasing state aid and a state-imposed levy cap.”

In his remarkably clueless column on Detroit and Milwaukee, Milwaukee Journal Sentinel contributor Christian Schneider twice suggested “Milwaukee has governance problems” without ever offering one example.

Then he went on to suggest that “Gov. Scott Walker‘s union reforms have given Wisconsin municipalities the flexibility to manage their employee costs to avoid meltdowns.” The implication is that wayward Milwaukee was rescued from its profligacy by the state.

On the contrary, Milwaukee was running balanced budgets while the state posted huge structural deficits under both Republican and Democratic governors. Milwaukee was fully funding its pension long before Walker’s union-crushing Act 10. And Milwaukee accomplished all this even as the state continued to welsh on its century-old promise to provide adequate state-shared revenue.

As for the idea that Act 10 was a boon to Milwaukee, most of its employees are police and fire fighters, who are exempt from Act 10, and whose wages and benefits account for more than half of the city’s budget. Meanwhile Walker has struck down the city’s residency requirement, so all those police and fire fighters with their protected salaries and benefits can leave the city and stop contributing to it through their property taxes.

In the decade after Detroit lifted its residency requirement, more than half of police officers left the city.  A study by Anderson Economic Group, East Lansing, found that Detroit lost $21.7 million in tax revenue in the first three years of the change after more than 15,000 people left the city.

In short, Walker hasn’t helped Milwaukee avoid becoming Detroit. He has struck a blow that might well have pushed the city in that direction, if not for the resiliency of this city, and yes, the generally good government leadership it has had. Milwaukee may lose its battle on residency, but it isn’t headed down the road toward Detroit. Most of the important indicators suggest it is steadily moving in the opposite direction.

42 thoughts on “Murphy’s Law: Is Milwaukee the Next Detroit?”