Building the new arena where Boston Store is located could have huge advantages for the team and the city.

Sketch D removes the Boston Store, but has a major entry plaza to the NW facing the Hilton Hotel. This plan then has an atrium along Wisconsin Ave. that can be entered from the new NW Plaza, Wisconsin Ave., the skywalk system, and from the Grand Avenue Atrium. Plans by Jim Shields.

In the mid-1980s, Milwaukee was essentially handed a free pro basketball arena by philanthropist Jane Pettit. The idea, however, was that it would be built near County Stadium, then the Milwaukee Brewers’ baseball stadium.

Mayor Henry Maier soon called a press conference and announced he opposed the location, insisting the arena must be built Downtown. Maier took a lot of flak from the media, business leaders and the like, for daring to look a gift horse in the mouth. Yet, for weeks on end, he pounded away at the importance of a Downtown arena. And ultimately, Maier got his way.

Some 30 years later Mayor Tom Barrett, periodically criticized as a weak leader, has a chance to show it’s not true. He can boldly come out in support of the proposal that maximizes the private and (likely) public investment going into this project and offers the greatest return for the city. Right now, the most intriguing solution is to build the new Bucks arena at 4th and Wisconsin.

The idea for this was hatched by Mike Mervis of Zilber Ltd., and it strikes me as an ingenious one. Mervis contacted architect Jim Shields and asked him to scope out the location. “I was kind of shocked by the idea,” Shields says, “but I sat down and did the drawings and very quickly got convinced.” He found the footprint of the mostly empty block from 4th St. to 5th St. and between Michigan and Wisconsin was big enough to fit the recently-built Barclays Center in Brooklyn and the new Sacramento arena. But the design would be even roomier and more powerful, if the land under 4th St. and the Boston Store building was also used, meaning that structure would be razed.

Think about the proposal and you’ll begin to see how many problems it solves, and how many opportunities it presents, for both the city and the basketball franchise.

1.It will revive the Grand Avenue Mall and W. Wisconsin Avenue. What was once the heart of Milwaukee’s Downtown has been a veritable ghost town for at least 15 years, with empty storefronts on the street and a declining and increasingly empty mall. Nobody has been able to solve the problem. Suddenly both the avenue and mall would be connected to a pretty steady flow of fans attending Bucks games, Golden Eagle games, Milwaukee Admiral fans and high-profile concerts.

2. It’s a Real Estate Opportunity for the Bucks. Right now the deteriorating Grand Avenue mall is available for a fire sale price. And it would stand right next to the new Bucks arena under this plan. The mall will be sold at auction and Shields suggests the city buy it and then resell it to the Bucks owners at cost. The team’s co-owner Wes Edens has broad experience in real estate and could transform the mall into a place with Bucks-themed apparel shop, bars, restaurants and whatever else the franchise needs, while also injecting life into the mall.

3. It’s the Most Exciting Possible Location: It’s the heart of the city, the heart of Downtown, it’s far more accessible to tourists, across from the Convention Center, next to the Grand Avenue Mall, just one block from both the Hyatt Regency and Hilton Hotels and closer to the Pfister Hotel than the Bradley Center, and within walking distance of Marquette University students, who attend Golden Eagles games.

4. Parking is Plentiful: The Grand Avenue Mall has about 3,500 parking spots and within a couple blocks are 9,000 more parking spots, Mervis and Shields estimate, mostly in covered lots like in the federal building (320 W. Wisconsin), at 100 E. Water St., at 105 W. Michigan, etc., and much of the parking is connected via skywalks. (And for those who don’t have cars, there may be no street better connected to the bus system.)

5. It’s a Much Cheaper Solution: Less space and money for parking (which typically cost about $25,000 per spot) would be needed. Less land would be needed for spin-off retail because the Grand Avenue could provide that. Less subsidy by taxpayers might be needed.

6. It Solves the Boston Store Problem: The downtown retailer is a white elephant that is so unsuccessful the city has agreed to pay it a subsidy of $1.2 million over four years if its owner Bon Ton Stores keeps the dying store open. How about investing in success instead? As Mervis notes, Bon Ton could move its corporate home office (also located in the building) and any developer in town would jump at the chance to create a development with the company as an anchor tenant. And Bon Ton clearly isn’t very interested in keeping Boston Store open.

7. It Would Be a Boon to Marquette University: MU has recently announced it will expand its campus, for the first time moving to the east of the psychological barrier of I-43, by purchasing about 7 acres in the 800 block of W. Michigan St., bringing MU much closer to the heart of Downtown. Right now the university buses its students to Golden Eagles games at the Bradley Center, but they could simply walk down Wisconsin Ave. to games. “It will be like having an arena on their campus,” Mervis says. MU president Michael Lovell, a source tells me, has met with the Bucks owners to say he favors an arena on Wisconsin Ave.

8. It Maximizes Local Investment: “We’ve had a 27 year experiment with the Bradley Center, with the idea it would attract retail,” Shields notes. But it never happened. “Quite the contrary, I think you’ve seen deterioration over the years,” he adds. Building an NBA Arena in the neighborhood of the Bradley Center, he notes, means using public and private funding “to essentially build a second retail mall 8 blocks north of Grand Avenue, with a food court, an NBA jersey shop, and other retail.” The result could be two malls that fail. Why not combine them and create one success?

9. It Maximizes Visibility: Ask yourself, is there anything exciting about the current location of the Bradley Center? Would it be any more exciting a block north? By contrast, 4th and Wisconsin is as urban and connected as you can get. The arena would actually be visible from the freeway, and located on the city’s paramount street, a beautiful avenue created to be the place for parades and foot traffic. Imagine, says Shields, the street is closed off for one hour before each Golden Eagles game, so MU students can march down to see their team. Locating the arena on the city’s main street would be a statement of pride in our Downtown, pride in our NBA team and pride in the City of Milwaukee.

10. It’s a Faster, More Practical Solution: The Bucks owners want a quick solution. Time is money. Land near the Bradley Center, whether its the old Ambrosia Chocolate site or the Journal Sentinel building, could have environmental problems that can be costly and slow to fix. The Journal company’s ownership is in flux, which could cause complications. There will be no such problems on Wisconsin Avenue. Much of the land in question is owned by the city, with a parking garage owned by Mervis’s Zilber Ltd. company and the owner of the Boston Store building, We Energies, has indicated a willingness to facilitate a deal. Since this proposal was announced, Bon Ton hasn’t expressed any objection.  And the city already has a Tax Incremental Financing plan in place for the Grand Avenue area that could be reconfigured for a new arena development.

I asked Tim Sheehy, President of the Metro Milwaukee Association of Commerce, a leader in the effort to find public funding for the new arena, to comment on the proposal. “Any site that marries catalytic urban development, with a footprint that allows for a functional wow-factor building is a site that should receive consideration,” he said.

Is there any down side to this proposal? Undoubtedly. There always are. Some in town are concerned the total footprint of land on Wisconsin Ave. is not sufficient. But the reality is we haven’t even gotten to discussing the possible negatives here because there’s been so little discussion of this proposal.

Where is Barrett’s leadership on this issue? The mayor has already said he would prefer a site as close to Wisconsin Ave. as possible. Well, you can’t get any closer than this proposal.

If Barrett thinks the idea doesn’t work, he should say so. This project is happening on his turf and his is the most important voice in the city. If, on the other hand, he thinks it’s worth pursuing, why not say so? Were Maier alive, he would be urging the mayor to seize the day. 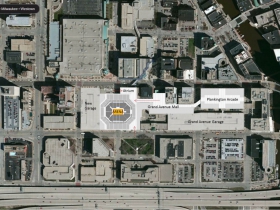 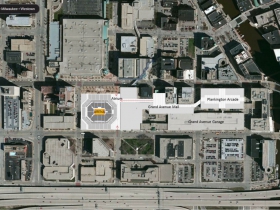 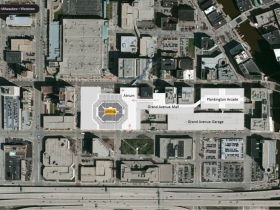 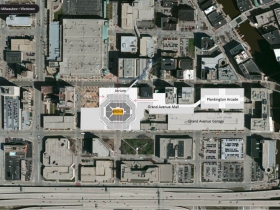