Site at 1st and National, longtime home of Select Sound, in booming area of development. 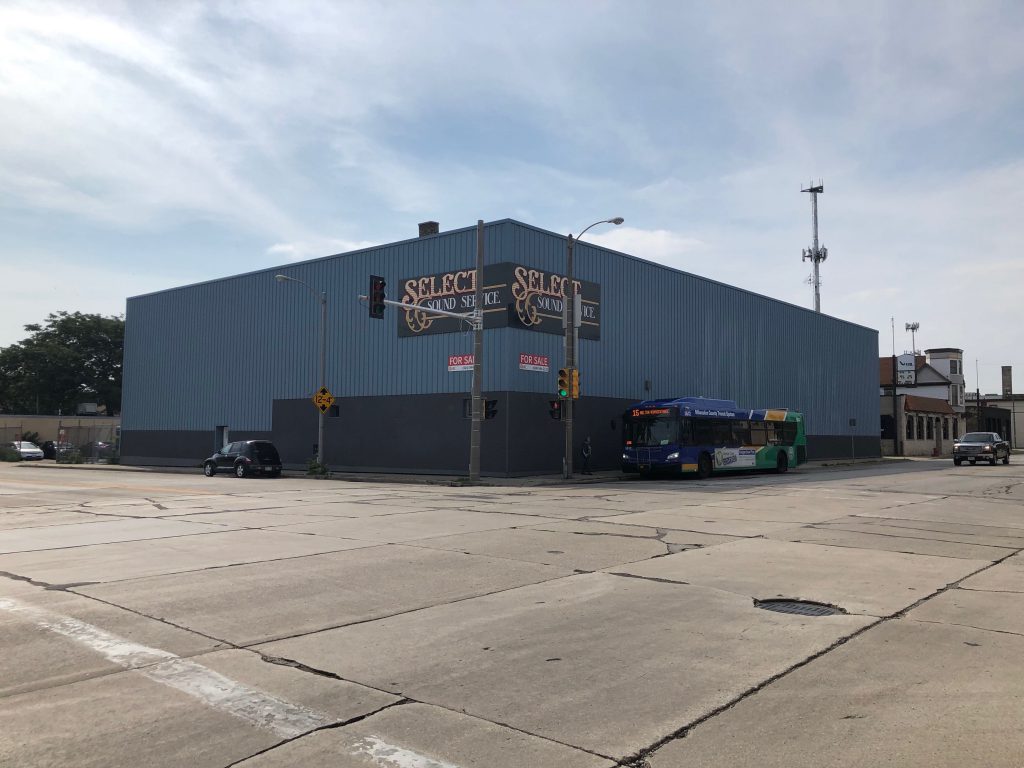 A highly-visible Walker’s Point property has hit the market.

The two-story light industrial building at the intersection of S. 1st St. and E. National Ave. is listed for sale for $1.5 million.

The 28,017-square-foot building became available following the sale of its longtime tenant, Select Sound Service, to Iowa-based Communications Engineering Company in May. Select Sound Service was founded and led by Bob Paquette who passed away in December 2018 at the age of 88.

“The property is easily divisible and would be a great opportunity for an owner occupant or redevelopment into a variety of uses,” says the listing sheet from Jones Lang LaSalle.

“It is a great building in a really dynamic location,” listing broker Joe Carollo told Urban Milwaukee. The JLL vice president said the property has drawn a lot of interest, so much so that it’s already under contract for purchase.

The 0.57-acre parcel at 107 E. National Ave. includes 28 parking stalls at the rear of the site. According to the listing, 18 offices are included in the building with skylights throughout. Not included with the sale is the microphone museum that Paquette maintained in the building.

A future owner could make a number of changes to the property to take advantage of its location on a busy intersection. The facade has been covered for years by a windowless metal cover, but a historic photo included with the listing sheet shows a building lined with windows facing both National Avenue and 1st Street.

Bringing back the windows would fit with the neighborhood’s evolution from a hub for manufacturing to the hub of Milwaukee’s dining scene and the emerging, mixed-use Harbor District. The property sits on one of the gateway streets to the inner harbor.

Properties near the busy intersection have drawn a substantial amount of interest lately. Developer Woda Cooper is planning an affordable apartment building for a vacant lot at the intersection’s northeast corner. The intersection’s southwest corner, a former paint shop, is now occupied by a Cousin’s Subs catering and delivery facility, though a portion of the facility remains for lease. South of that Bray Architects redeveloped an industrial building into a new home for its architects and designers.

The northwest corner, currently home to D.I.X. tavern, has been a bar for decades. It might soon get a neighbor as a small commercial property at 725 S. 1st St. just to the north has recently been restored.

A modern Jewish deli, dubbed Allie Boy’s Bagelry and Luncheonette, is planned just to the east at 135 E. National Ave. in the building most recently home to Drink Wisconsinbly.

A study completed in 2018 examining the land uses around a potential extension of The Hop into Walker’s Point envisions the site as a candidate for redevelopment.

The listing and city records state that the Select Sound building was built in 1908, while a Wisconsin Historical Society listing gives the construction date as 1895. Regardless of when it was built, it is assessed today for $700,400.

The Select Sound building is one of many properties for sale along S. 1st St., including a city-owned, vacant parcel at the intersection of W. Lapham Blvd. and the former American’s Best Quality Coatings metal finishing facility at 1618 S. 1st St.