Inside Bray Architects in Walker’s Point 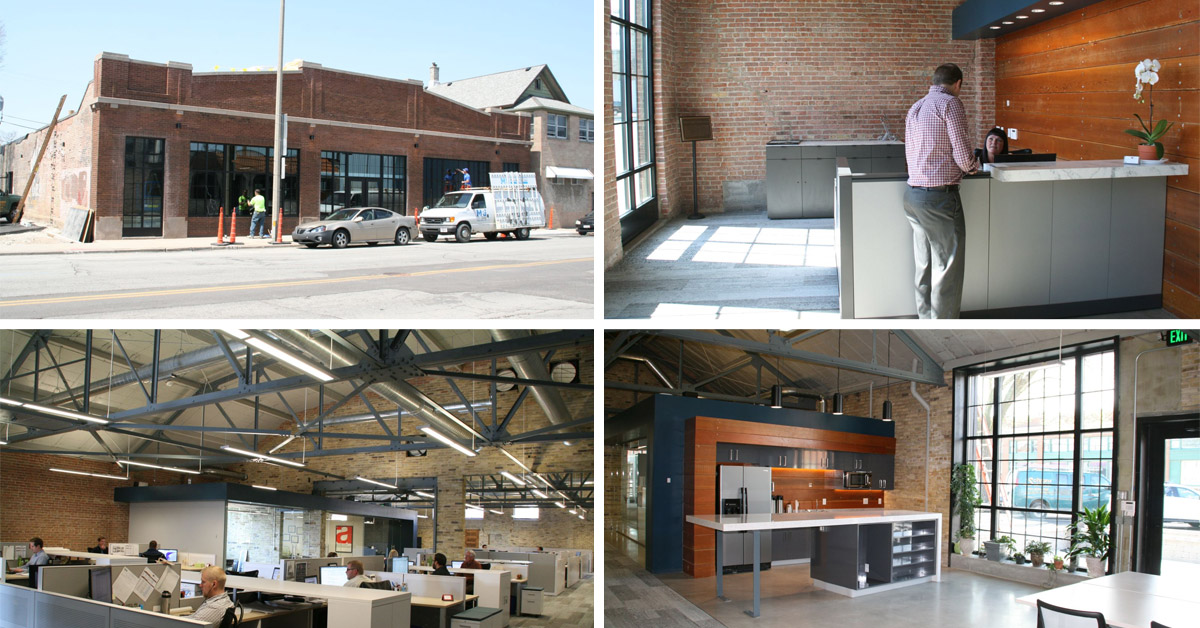 Milwaukee’s near south side neighborhood of Walker’s Point is undergoing a remarkable transformation, as a tidal wave of apartments and offices are created in former warehouse and manufacturing facilities. At the same time, large manufacturers that were housed in scattered buildings throughout the neighborhood, including Federal Manufacturing Co. and Transpak, have decamped for large, new facilities in the suburbs. A classic example of that is Bray Architects new office, located in a former Federal Manufacturing facility on S. 1st St.

Bray left their Historic Third Ward home earlier this month for a renovated building at 829 S. 1st St. The company, which specializes in the design of educational facilities, acquired what its president Matthew Wolfert called a “shell of a building” and got to work designing their new offices. They hired Berghammer Construction Corporation to serve as the general contractor and served as their own architect. The $2 million project, including the $600,000 purchase price for the building, took less than a year to complete.

The architecture firm’s new home manages to leverage the historic structure of the 1919 building to create an office space that is truly modern. The building’s high ceiling, owing to its prior use as an industrial facility, makes the entire space seem open and welcoming. The original brickwork is exposed in a number of places, as well as a re-poured concrete floor. Large windows pair with the high ceiling to bring in a substantial amount of natural light. A company-wide emphasis on collaboration has produced a layout that has almost no private offices, instead favoring a number of spaces designed for collaboration and desks grouped together with low cubicle walls. The end product is an office space that is only achievable by marrying the bones of an industrial building from a long-gone era with modern design techniques.

Bray’s new office space has a number of subtle nods to their specialty as a designer of education facilities. Several of the interior walls are made from salvaged, old growth timber from the UW – Oshkosh’s Kolf Fieldhouse. The ceiling of the interior offices is made in part from a salvaged gym floor from Wisconsin Lutheran College. Still to come is a bicycle rack that will be built as a collaboration between Bray’s design team and high school students from Wausau.

Bray’s move is their fourth expansion effort in the past ten years. The firm now employs 30 people in their Milwaukee office, and another 10 in Sheboygan. It occupies approximately 7,500 square-feet in the 10,331 square-foot building. The remaining 2,100 square-feet was originally intended for a commercial tenant, but during my tour of the building with Wolfert and business development director Jean Casey they indicated the firm might need the additional space sooner rather than later. 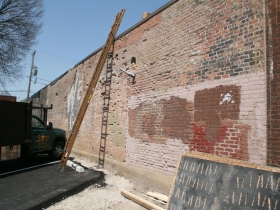 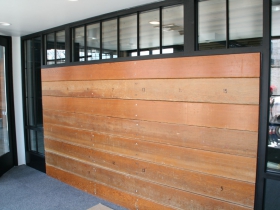 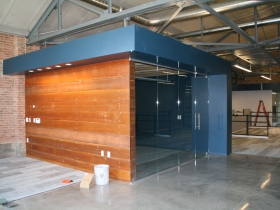 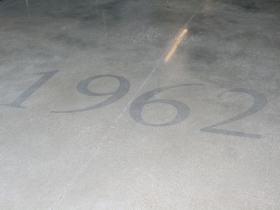 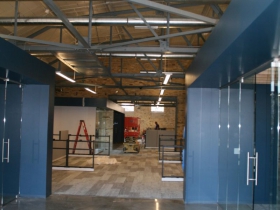 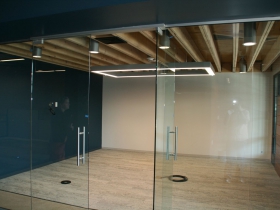 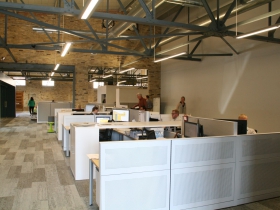 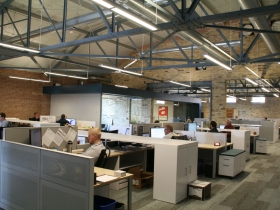 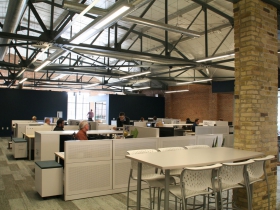 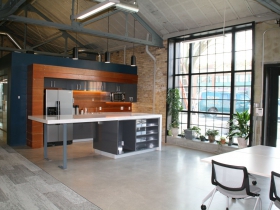 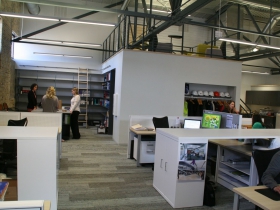 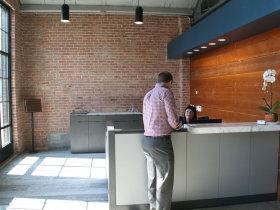 Moving from their previous space in the Historic Third Ward became an inevitable outcome because of the firm’s growth. When Wolfert surveyed the company’s employees they responded they wanted a location “close to Downtown.” The firm searched for locations in the Historic Third Ward, Downtown, Westown and Haymarket before settling on Walker’s Point.

Wolfert noted that the “vast majority” of Bray’s employees are under 40, himself included. He added that “a lot of our employees bike to work.” This led to the installation of a shower facility for those that have a longer pedal-powered commute, an amenity that a number of employers are adding as a way to encourage employee wellness. The S. 1st. St. location is easily accessible from Bay View and areas south as well as Downtown and the East Side to the north. It’s also well situated on a number of Milwaukee County Transit System routes.

Bray sells itself as a company for younger employees. “Employees do more here earlier in their career than elsewhere,” Wolfert says. He hopes the new office space is yet another tool the firm can use to recruit talented individuals.

Interestingly enough, the eclectic mix of neighbors, including a strip club and scrap metal facility, didn’t discourage Bray from moving here. Employees of the firm seem excited to have space to call their own in a highly urban, rapidly improving neighborhood. Following the firm’s nomadic history of moving around the past few years, Wolfert said that “it’s fun to commit to a neighborhood.”

Bray Architects move here is part of a broader redevelopment of a collection of buildings formerly home to the Federal Manufacturing Co. The manufacturing firm moved to a new building in Pewaukee in 2014, leaving behind four buildings and two lots. Developer Dan Katt, through his firm Craft Development, is leading the redevelopment of the complex known as the Federal Commons. Two of the buildings on S. 2nd St. have now been redeveloped, one as an office building and commercial kitchen for Saz’s and another as an event space known as South Second. Katt’s plans for the complex also include developing a 40-unit apartment building at a vacant lot at 822 S. 2nd St.

Bray’s building dates back long before Federal Manufacturing bought it in early 1980’s. It was built in 1919 as a garage for Wadhams Oil Company and its original address was 349 S. Clinton St., before the city standardized addresses in the 1920s. More notable than the garage is what formerly stood on the land Bray is using as a parking lot, a gas station with a truly unique design.

During the period in the early 1900’s when stand-alone gas stations were a new idea, Wadhams hired prominent local architect Alexander C. Eschweiler to design eye-catching stations. Eschweiler created the distinctive Japanese-inspired, pagoda-style structures. Wadhams, which had its headquarters across the street from garage, owned 41 gas stations in the Milwaukee area by 1931 when a series of corporate mergers started to erase the company’s local presence. A corporate family tree would show Wadhams folding into today’s Exxon Mobil Corporation, which was the most valuable company in the world for a number of years until Apple displaced it in 2011. While the name is long gone, the distinctive station design is still visible today, with buildings in Milwaukee at 411 W. North Ave. and 3203 W. Lincoln Ave. and in West Allis, Waterford, Wild Rose and Cedarburg. The Clinton Street Filling Station, as the one in Walker’s Point was originally called, was built in 1930, stopped pumping gas in 1983 and was ultimately removed in 2003. The roof of the structure is being stored at State Fair Park in West Allis.