Enlightened Brewing Company‘s expansion has been eight months in the making, and owners James Larson and Tommy Vandervort are finally unveiling their new addition this weekend. A farewell party will mark the end of Enlightened’s Lincoln Warehouse (2018 S. 1st. St.) era on May 10. A grand opening party and can launch will kick off business at the new and expanded brewery and taproom at 2020 W. Allis St. on May 11. 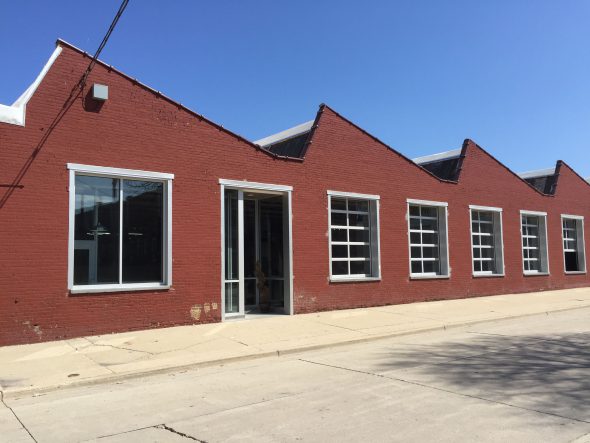 Enlightened’s current Lincoln Warehouse spot only allowed them to produce about 240 barrels annually. With their current setup in the new location, the microbrewery will be able to brew about 3,000 barrels per year, and up to about 7,000 or 8,000 barrels if they decide to add more tanks in space that’s allocated for expansion.

The relocation will also give Enlightened the ability to can some of their beers. They’re currently producing Cream City Brix cream ale, The Imperative pale ale, and Kettle Logic amber ale in 12-ounce cans, with the hope of canning their Prototypical Porter on a seasonal basis, as well as a sporadic experimental one-offs (such as IPAs, barrel-aged beers, and kettle sours) that they’ll brew at their Lincoln Warehouse test location…

Walls were knocked out, five massive windows and a new vestibule were installed, the factory floors were buffed, two bathrooms have been added, walls were given a fresh coat of paint, and the obstructed skylights were cleared to allow natural light to seep into the vast taproom.

Starting off, the brewery will have 11 beers on draft but will eventually be able to handle 20 beers on tap. The company will still self-distribute. The new location also raises the taproom’s capacity from 49 to 234 people. Following the opening, Enlightened Brewery will be open 1 to 6 p.m. Sunday, 4 to 10 p.m. Wednesday, 4 to 11 p.m. Thursday and 3 p.m. to midnight Friday and Saturday.

The space at 135 E. National Ave. is slated to become a new restaurant, “inspired by a modern Jewish deli” and specializing in New York-style bagels. The spot was the former location of the Drink Wisconsinbly Pub, which closed in December 2018 and has since moved to the Bucks’ Entertainment Block.

The proprietors are husband and wife, Ben Nerenhausen and Staci Lopez. Lopez’s father was nicknamed “Allie Boy,” thus the couple have named their venture Allie Boy’s Bagelry & Luncheonette. The Business Journal’s Sari Lesk spoke with Nerenhausen about the restaurant’s offerings:

He said they aim to open the restaurant by early fall, with a menu that specializes in New York-style bagels. Although the restaurant is inspired by the idea of a Jewish deli, he said customers can expect foods from cultures in Eastern Europe and the Middle East.

The menu will include items like house-made cream cheese, smoked fish and breakfast sandwiches…

The restaurant will also have a full liquor license, so that Allie Boy’s can serve beer, wine and cocktails, he said.

Disagreement over a food truck ban along W. National Ave. is still not resolved. The ban was first proposed in February by Alderman Robert Donovan, but was vetoed in March by Mayor Tom Barrett. The ban originally restricted all food trucks from operating along W. National Ave. from S. Layton Blvd. (27th Street) to S. 39th St. Following the mayor’s veto, a new deal allowed food trucks to operate on a lot owned by developer Ryan Pattee. However, one food truck owner is speaking out about the new location’s issues.

Francisco Santos, owner of Arandas food truck, says he was pressured into taking the deal, and that the lot at 3528 did not work for his business. Milwaukee Neighborhood News Service‘s Edgar Mendez reports:

“They gave me a contract the day before and I asked for time to review it. I kept getting calls the next day and was being told that I didn’t want to cooperate so I signed it. I didn’t want any problems,” Santos said.

Santos attempted to move back to his spot on W. National Ave., where parking restrictions require the truck to be moved every two hours. He asserts that he has done this since moving back, but was still visited by police and a traffic enforcement officer 10 days later. Santos then moved the truck to S. 22nd Street and West Greenfield, which he says has impeded his business. But Patricia Doherty, long-time aide to Donovan, says that all Santos needs to do is comply with the city’s parking restrictions. Milwaukee Safety and Civic Commission member Andrea Rodriguez, meanwhile, supports Santos, and is looking for a solution:

Rodriguez and another supporter of Santos met with Barrett on May 2, to try to discuss a policy solution. One of the possibilities they discussed is adding a few lines to the existing ordinance to allow food truck vendors to park in one spot for more than two hours as long as they had support from residents and businesses in the area, Rodriguez said. She said that they were also working with the Southside Organizing Committee to get permission to operate long-term at Santos’ new location on West Greenfield Avenue.

The Batches Bakery at 401 E. Erie St. in the Third Ward will have its last day of business on Friday, May 10. The company will continue to do wholesale and special orders at a new kitchen at 316 N. Milwaukee St. Jaceleen Latin-Kasper, the bakery’s current owner, will continue to run the new kitchen.

Batches will also still be working with multiple businesses throughout the city. Urban Milwaukee provides a list:

Outside of the Batches wholesale business, customers will still have a way to get a hold of Batches’ baked treats at a number of other businesses. Avenue Coffeehouse (911 Milwaukee Ave. in South Milwaukee ) and Anodyne Coffee’s cafes will serve muffins, cookies and scones. A new pie will be available weekly at Tandem (1848 W. Fond Du Lac Ave.). The Iron Horse Hotel (500 W. Florida St.) will offer Batches’ confetti cake and two pie selections, while DanDan(360 E. Erie St.) and Fauntleroy will serve the bakery’s regular desserts. Batches will also be working with the Newaukee Night Market this summer, and The Mothership (2301 S. Logan Ave.) in the future.

While the operations are changing, the means of contacting Batches will remain the same. The company can be reached by calling 414-239-8980, or by email at jaceleen@batchesmke.com and linda@batchesmke.com.