How a brand name became a bar and moved to Bucks Entertainment Block. 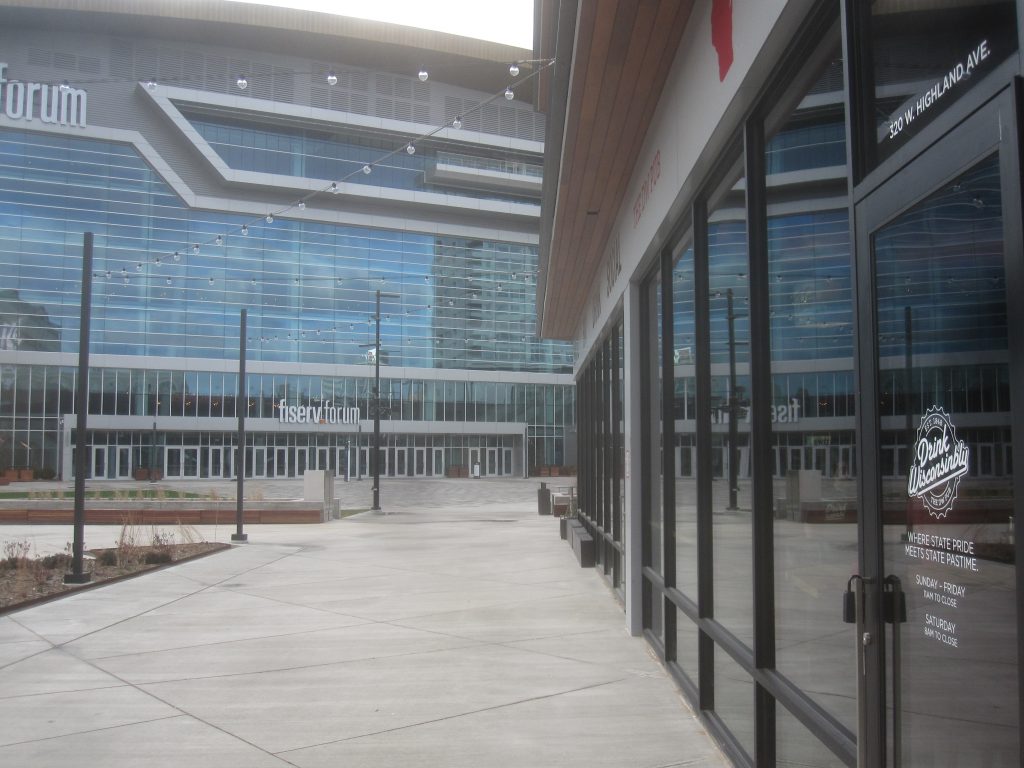 According to the firm’s website, the “Drink Wisconsinbly” brand was “conceived of in a bar by a guy in Wisconsin in 2013.”  This “guy” was Richard Lorbach, the creative director of a Minneapolis novelty company which is owned by Wisconsin native Ryan T. Walther.

And soon Walther and his company included the brand in numerous items of apparel, barware, keychains and similar items. The firm’s products extolled the merits of Day Drinking, and of Wisconsin’s first rank among all other states in in the field of inebriation. (“Outdrinking Every State since 1848.”)

In 2015, Walther’s 30Watt company licensed the Drink Wisconsinbly brand to a group operating a tavern under that name at 135 E. National Ave. This ended acrimoniously in court, and the place, which opened on Wednesday, February 10th, 2016, closed its doors in December, 2018.

Meanwhile, Walther reorganized his company, spun off Drink Wisconsinbly to a separate entity, and raised $1.5 million to open a new 3,269-square-foot bar immediately across the plaza from the Fiserv Forum, occupying a small but significant portion of the new 20,649-square-foot building known as the Milwaukee Bucks Entertainment Block. It shares space with Good City Brewing and Punch Bowl Social in the $36.4 million structure owned by a group affiliated with the Milwaukee Bucks, the tenants of the Fiserv Forum. It will be joined this month by the MECCA Sports Bar and Grill.

“Drink Wisconsinbly” is brand new for this town, where hundreds of taverns went for decades with their brand to be found on no apparel, except for the uniforms of the softball teams and bowling leagues they sponsored. By contrast, the visitor to this new establishment will be able to return home with plenty of gear emblazoned with the slogan, available for sale at the front desk in a bewildering variety. No room in your suitcase, what with all of the cheese and sausage you’re packing for the trip back? Shipping is available, as is online ordering.

Perhaps the newest thing about Drink Wisconsinbly is that it presents the local visitor with the first look at a very new Milwaukee — not just in a building recently constructed, in a neighborhood that did not exist, except as a phantom — but of a new touristy Milwaukee. What once was an overlooked district is now a destination. That’s very new, and is going to take some getting used to.

Drink Wisconsinbly occupies the southwest corner of the glassy building, designed by RINKA. Its corner is cut out at a 45 degree angle, offering ringside views of the remnants of the Bradley Center, now being demolished. A glimpse to the south shows the north wall of Turner Hall, seen from a vantage point unimaginable no more than a year ago, except in the eye of the architect. A plaza opens to the tavern, and in clement weather visitors will be able to carry their beers outside, provided they are in 20-oz. plastic cups, which are already stacked by the exits.

“Beer Hunting Season is On,” a sign on the door indicates, and the visitor enters to find an open concept room with exposed mechanicals suspended from the ceiling, which is painted black. Red walls and red stools add some color to the place, which can be flooded with light in the late afternoon, sun permitting. There is a wall with over 1,000 beer cans — and one that is not a beer can. (See if you can find it!) There are television monitors, to be sure, suspended lights featuring Wisconsin postcard scenes c.1950. A cutout Wisconsin map, similar to those found at the borders of the state, welcomes us to the tavern, and includes a flipboard tallying the number of beers sold, which was running at the rate of about 1,000 a day for its first week in business. At $7 for a pint, that’s a good haul.

True to its brand, the tavern’s beers are exclusively brewed in Wisconsin. It also features “Fine Wisconsin Wine,” a relatively new category. The company has also partnered with a Wisconsin-based rectifier to offer its own brandy, created in California and finished here. The Old Fashioneds are served from a bubbler.

In many respects, Drink Wisconsinbly is a departure for Milwaukee. Not only is it a new tavern in a new building in a new district, it indicates a departure from how visitors and locals will see this area, once familiar and so old, and now so new. 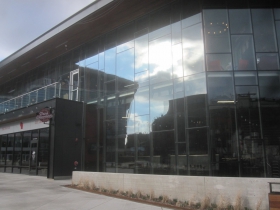 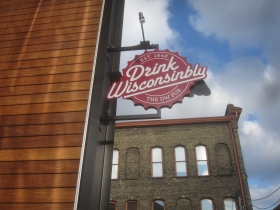 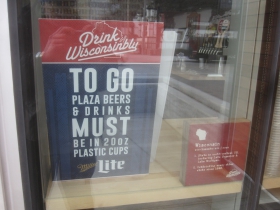 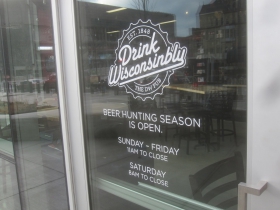 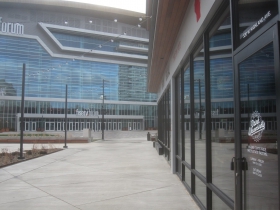 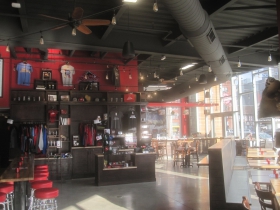