Would MPS Referendum Pass? Should it?

The Journal Sentinel’s Annysa Johnson recently reported on a proposal to hold a referendum to raise the Milwaukee Public Schools’ revenue limit. According to Johnson, the goal is to “get the question on the spring 2020 ballot to take advantage of the large Democratic turnout expected for the presidential primary.” There is little doubt that MPS faces serious financial challenges that increase over time.

In April, the Wisconsin Policy Forum reported on the 2020-21 budget. Among other problems, it pointed out that allowable spending has been fixed even as many of the costs faced by MPS, particularly health care, have grown. “The budget narrative points to the fact that the district’s base revenue limit per pupil has been frozen at $10,122 since 2014-15 and is only 1.1% higher than it was in 2010-11, concluding that “the district’s revenue projections remain both conservative and bleak.”

In his commentary on the proposed referendum, Alan Borsuk observes that “it illustrates a key problem for MPS – parents are choosing in large numbers to go elsewhere.” At the time of the failed MPS 1993 referendum, “more than 90% of Milwaukee kids who were getting publicly-funded education were in the main body of MPS schools. … In 2018-’19, the percentage enrolled in MPS was 56%, with tens of thousands going to private schools (using vouchers), charter schools, or schools outside of Milwaukee (using open enrollment). The decline is, in itself, a big issue for MPS, and reversing it a big priority.”

Starting in 1973, school districts in Wisconsin were subject to a revenue limit. The next graph shows the latest revenue limits for Milwaukee Public Schools (shown in green) and a selection of neighboring districts. Milwaukee’s limit is slightly above the state average (in black) and at the low side for districts in the metropolitan area. 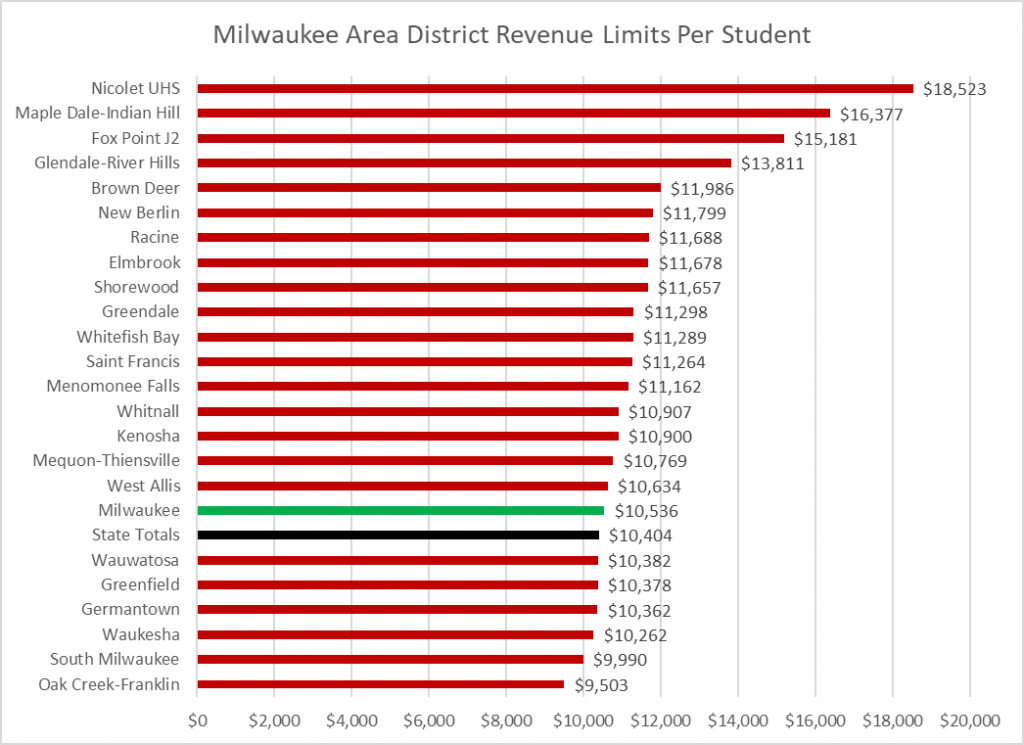 When revenue limits were first implemented, they were based on previous district spending. Thus, previously low-spending districts were locked into future low spending. The only alternative is to schedule a referendum asking the voters to approve increased spending.

Under the revenue limit, funding is shared by the state of Wisconsin and by local property taxpayers in the school district. Originally the state committed to paying two-thirds of the total statewide cost, but that commitment was dropped during the Great Recession. The state adjusted up or down so that districts with low total property value per student receive more and property-rich districts get less state aid.

Although local property taxes and state aid falling under the revenue limit account for most education spending in Wisconsin revenue, districts receive additional state and federal funding, as shown in the next graph. The largest share of federal funds (called “Title 1”) are distributed based on the percentage of district poverty. In addition, Wisconsin reimburses for part of their special education expenses. These two sources probably account for the bulk of the additional funds for MPS. 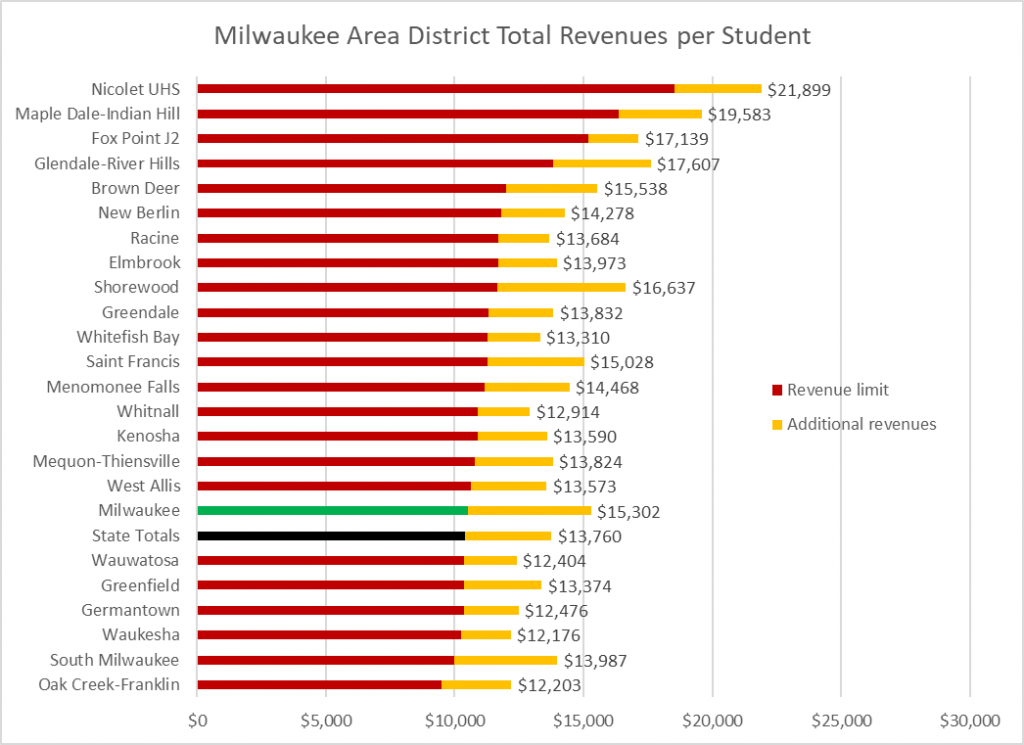 What are the prospects for the success of the referendum? The Marquette Law poll in January of this years asked, “Which is more important to you: reduce property taxes or increase spending on public schools?” The result is shown below, both statewide and those in the city of Milwaukee. 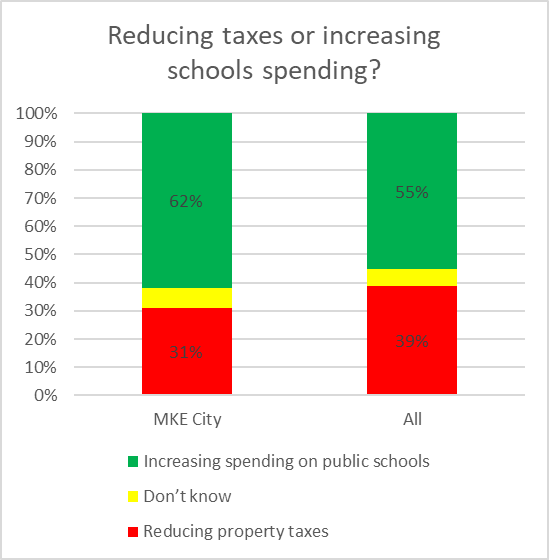 This result suggests that the referendum would be successful. Statewide, there has been a shift to favor more school spending even at the expense of higher property taxes. This result is stronger among Democratic than Republican respondents.

This support is stronger in Milwaukee than in the rest of Wisconsin. However, considering that the sample size of Milwaukee residents was only 39, some caution would be in order. 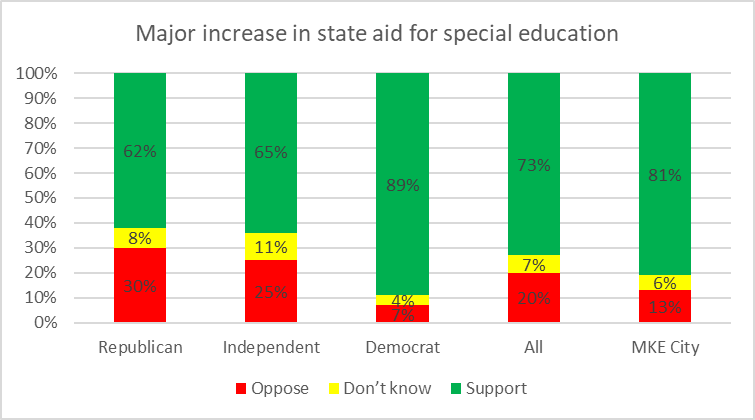 Despite what would appear to suggest overwhelming support for the referendum, it faces several obstacles.

One is a lack of interest among many Milwaukeeans to all things MPS. In the spring 2019 election for school board members, only 19% of Milwaukee’s registered voters voted for either candidate for the city-wide school board seat. While scheduling the referendum next spring to correspond to the presidential primary is likely to increase turnout, there is still the issue of voter interest. How big will be the “undervote,” voters who vote on the presidential ballot but skip the referendum? 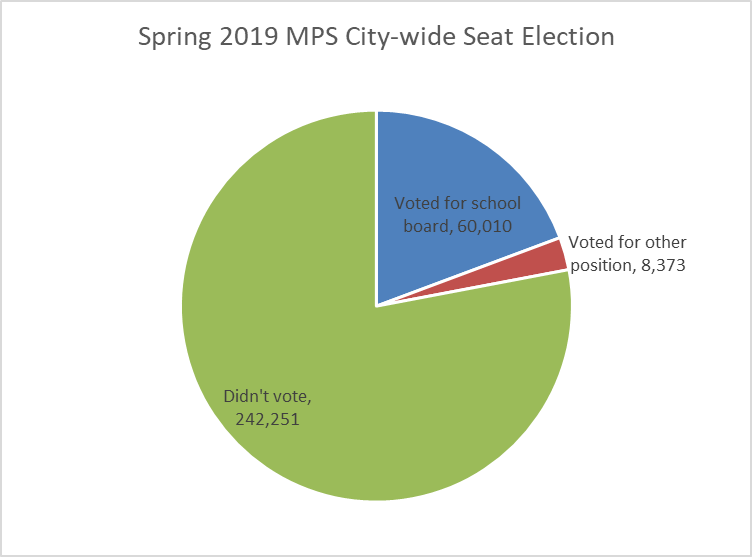 Another danger to the success of referendum is that opponents of the referendum, by emphasizing the larger total MPS revenue, will convince voters that MPS is already adequately funded. But this extra funding largely results from challenges because of the MPS student population, including high poverty and students with special needs. Comparisons with other districts’ budget are not meaningful unless adjusted for differences in student populations. Still, a follow-up Journal article falls in the trap of comparing district spending, without making that adjustment.

A final threat to the success of the referendum is that some of its supporters, notably the MTEA, entangle their opposition to choice and charter schools in the discussion. It is instructive, I think, to look at the results of a question on the April Marquette poll. The question asked, “Do you support or oppose a proposal to freeze the number of students who may enroll in private voucher schools across the state and to suspend the creation of new independent charter schools in the state?” 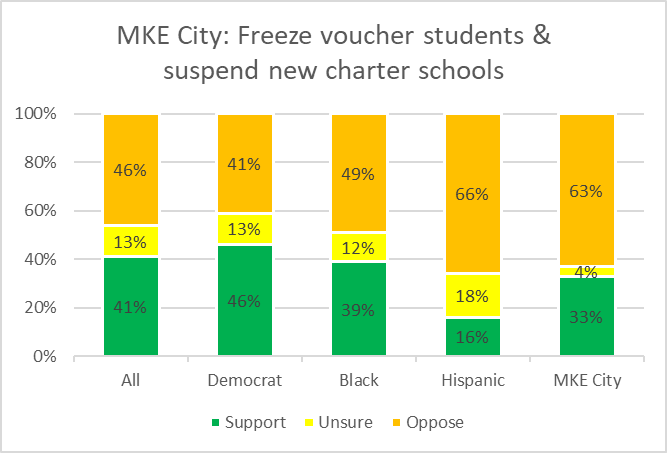 In addition, a majority of Hispanics and a plurality of blacks opposed the freeze.  Again, small sample sizes (27 for the sample of Milwaukee voters) suggest caution interpreting the results.

Available polling suggests that a majority of Milwaukee voters would be open to an increase in MPS funding, so long as the question did not get entangled in other issues.

One thought on “Data Wonk: Would MPS Referendum Pass? Should it?”