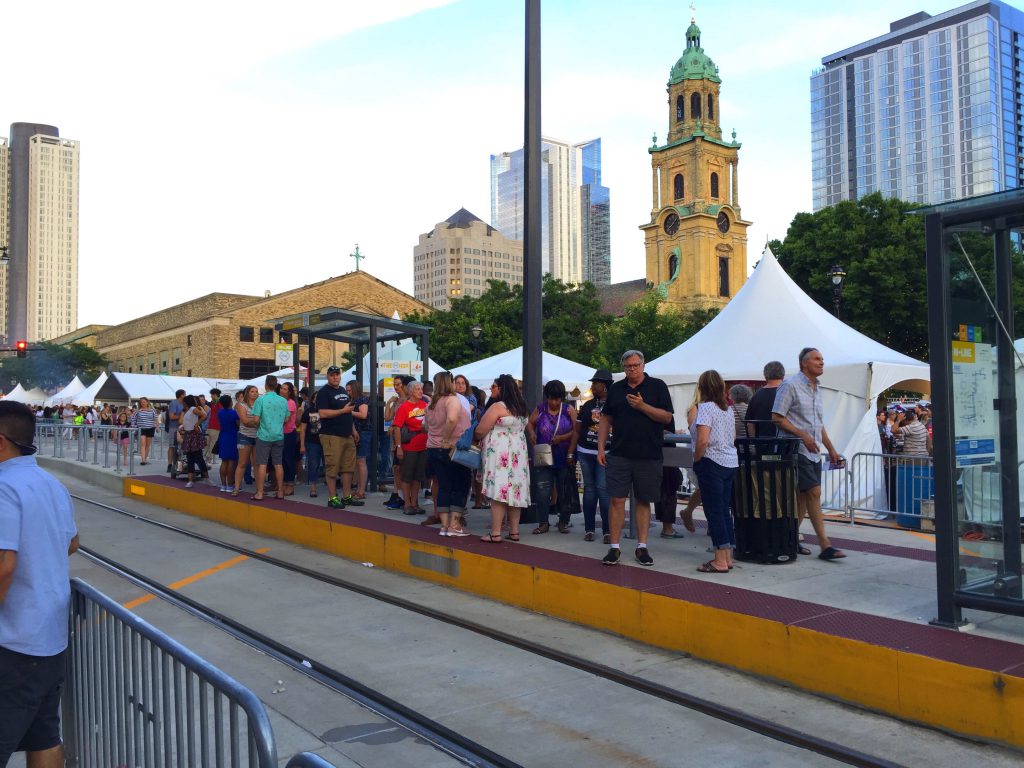 A large crowd of people wait for The Hop during Bastille Days. Photo by Dave Reid.

If you were Downtown on Saturday, your eyes were not deceiving you. The Hop was packed.

The automatic passenger counters embedded in the vehicles’ doors recorded 8,968 riders on Saturday, eclipsing the previous high of 7,798 set on November 3rd during the system’s opening week.

Mayor Tom Barrett called a press conference Tuesday morning to announce the good news, and push for the Common Council to take up his expansion plan.

“The strong numbers we’re seeing are further confirmation that The Hop is delivering on its promise of creating a more connected city and providing an easy and efficient way for residents and visitors alike to access many of the incredible destinations and events that make Milwaukee special,” Barrett said. “The benefits of the streetcar to the city are clear. It’s time to expand these benefits into the neighborhoods, adding more destinations to the route and providing even more access to our citizens to utilize this tremendous asset.”

The 2.1-mile system is currently free to ride as a result of a three-year federal operating grant and a $10 million, 12-year sponsorship agreement with Potawatomi Hotel & Casino. The city estimated 1,800 daily rides as part of the system’s 2011 environmental impact statement.

The news of high ridership coinciding with nice weather comes as no surprise to Barrett and other politicians who have predicted for months that ridership would rise during Milwaukee’s busy tourism season in the summer. “It’s summertime. It’s a time when we know people love to be in our community,” said Barrett. “We believe these numbers are going to remain strong and get even stronger.” Streetcar ridership data was added to The Hop website.

“These are really some very impressive numbers,” said Alderman Robert Bauman. “If anything this is an argument for acquiring more cars.” Bauman has repeatedly advocated for increased service frequency to draw more ridership. He said ridership would continue to climb when the lakefront extension is scheduled to open in late 2020.

Bauman noted that people are learning to park elsewhere along the route “Milwaukeeans are starting to figure that out. It works, it bolsters the event, it makes life easier for attendees,” said Bauman.

“The most common comment I get now is ‘when are you going to get to it extended to this neighborhood or that neighborhood?'” said Barrett. The mayor introduced a proposal in May to extend the system to the convention center, Bronzeville, and northern Walker’s Point. That proposal, which would have the convention center expansion done in time for the July 2020 Democratic National Convention, remains stuck in the Common Council.

“I agree with the mayor, we have to look for expansion as quickly as possible,” said Bauman.

In Detroit, the Q-Line is seeing ridership growth after seeing a sharp drop when free rides ended.

Milwaukee officials recently announced their intent to keep the system free for through 2020 and the need to raise more funds to cover the operating cost. This served to confirm earlier Urban Milwaukee reports that no farebox equipment had been ordered.