Vetoes will help pay for $65 million more in education funding in revised budget.

By Laurel White, Wisconsin Public Radio - Jul 3rd, 2019 11:57 am
Get a daily rundown of the top stories on Urban Milwaukee 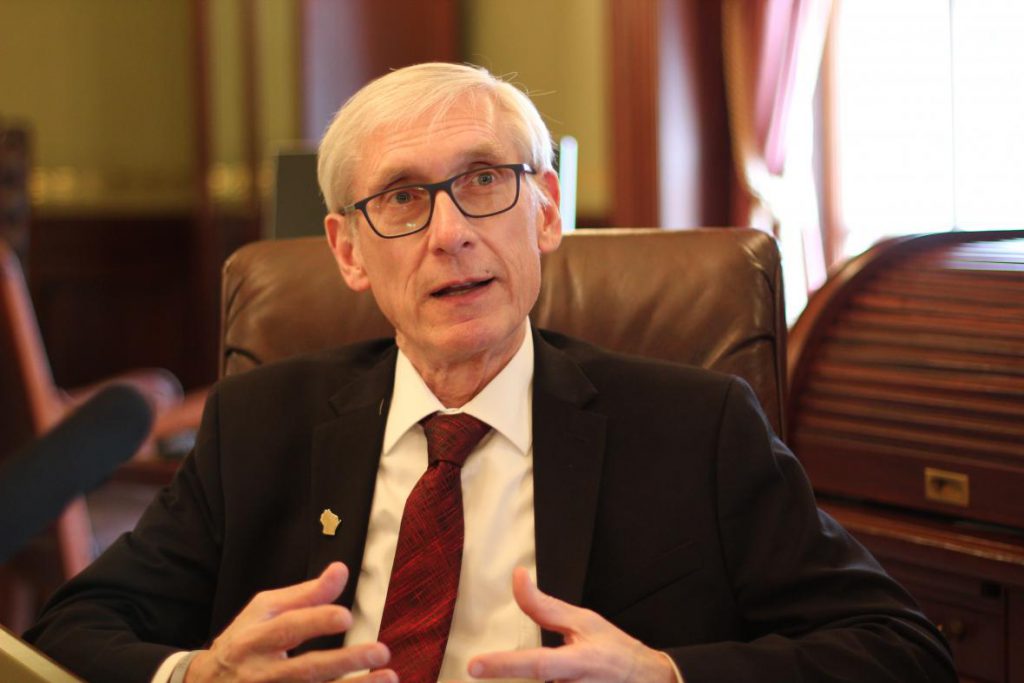 Gov. Tony Evers used his veto pen Wednesday to boost K-12 education funding in Wisconsin by about $65 million in the next two-year state budget.

The change was one of 78 partial vetoes Evers made to the $82 billion budget approved last week by Wisconsin’s GOP-controlled Legislature.

“Unfortunately, the budget I’m signing here today is, in many ways, insufficient,” Evers said at a Capitol event. “In recent weeks, I strongly considered vetoing the budget from the Legislature entirely because it did not do enough to ensure that our kids and our schools had the resources they needed to be successful.”

The governor has one of the most powerful veto pens in the country, with the ability to delete words, numbers and punctuation from the state’s spending plan.

The boost to education funding means the state will increase K-12 education spending by about $570 million over the next two years. The budget approved by the Legislature had already slated a roughly $500 million increase.

Evers accomplished the spending bump by increasing per-pupil aid in Wisconsin by $63 per student in each of the next two years. The change, which will cost roughly $87 million, is similar to one requested earlier this week by the Wisconsin Association of School Boards.

However, the governor also eliminated an $18 million technology grant program within the K-12 education budget. In his veto message, the governor said the funds “could more effectively be spent on programs that close achievement gaps.”

His increase and cut combined result in a net increase of about $65 million to K-12 schools from his veto pen.

Even with that $65 million boost, the $570 million schools spending increase is still dramatically less than the $1.4 billion bump he proposed earlier this year.

Republicans argued that increase was too expensive for taxpayers.

The governor paid for the education spending increase by zeroing out a number of other proposals in the budget. That includes about $23 million slated to pay for implementation of some state work requirements and for people who receive public benefits like food stamps.

According to the governor’s office, the work requirements aren’t entirely de-funded — some will remain in place.

Evers also deleted some programs scheduled to be funded through a so-called “supplemental appropriation” fund overseen by the state Legislature’s budget-writing committee. Under the budget, the programs paid for by the supplemental appropriation would require an additional level of approval by the committee. Evers eliminated some Department of Health Services programs from that list, including a $2.8 million telehealth expansion. His office said that program and others have already been or will be funded through a DHS surplus from the previous budget.

Evers also eliminated a vehicle registration fee decrease for large vehicles that would have cost the state $7 million, deleted a $2.5 million state Department of Transportation study on mileage based fees and tolling and eliminated $15 million of a $90-million transfer from the state’s general fund, which pays for education, to the transportation fund.

Evers also used $30 million in savings from a re-estimate of state Medicaid costs to fund the spending bump.

“This is a good budget for the state of Wisconsin,” Fitzgerald said. “(Evers) basically signed the Republican version of the budget today.”

Fitzgerald didn’t express concern with the governor’s K-12 spending increase, noting the change is “in the governor’s purview.” He did, however, call the funding cuts for implementing some state work requirements for public benefits “disappointing.”

“Governor Evers seems intent on trapping people on welfare,” Vos said in a prepared statement. “Because of his partial vetoes, he’s starving programs that incentivize work, undermining their implementation and skirting the law. We know people support drug testing and work requirements for welfare recipients and this budget ignores that fact.”

Vos did, however, call the overall spending plan “a good budget.”

“The majority of provisions touted by Governor Evers today came directly from Republicans,” he said in a prepared statement.

“At a time of record low unemployment and increasing wages, the last thing we should do is incentivize welfare,” he said.

The governor also used his veto pen to eliminate a cap imposed in the budget on the amount of state money that can be used for Lt. Gov. Mandela Barnes‘ security detail.

“Inadequate security measures put the brave men and women of law enforcement, the Lieutenant Governor, his staff, and the general public at large in danger,” the governor said in his veto message.

Republicans inserted the limit following reports that Barnes’ security costs have been higher than those of former Lt. Gov. Rebecca Kleefisch.

Barnes is the first African American to hold the office. A former aide has tweeted in support of the lieutenant governor’s security expenses, sharing Barnes regularly received “hateful” messages when he was a state lawmaker.

Evers nixed a last-minute addition to the budget that spurred some controversy at the Capitol: a provision that would allow Tesla vehicles to be sold directly to consumers in Wisconsin, without a car dealership acting as an intermediary.

“I am vetoing this provision as I object to significant changes to existing motor vehicle dealership law and the consumer protections they provide to Wisconsin occurring late in the state budget process and without the opportunity for adequate public input and debate,” the governor said in his veto message.

The proposal was added to the budget during final deliberations by the state Assembly. It was seen by some as a move to lure GOP Sen. Chris Kapenga, R-Delafield, into supporting the budget in the Senate, where the plan faced a slim margin for passage.

Kapenga had pushed for the Tesla law change in previous legislation.

The governor also vetoed a provision in the budget that would have cut about $7 million in state aid to Milwaukee County for child welfare services in 2020-2021.

The reduction spurred debate within the state Legislature’s budget-writing committee, as Republicans argued it is unfair for Milwaukee to receive the state support while other counties do not.

In his veto message, the governor said he restored the funding because cutting it “does nothing to improve the lives of children and their families.”

“The immediate and only result of this reduction in shared revenue will be cuts to vital government services provided by Milwaukee County, and this leaves the county little time to prepare for these cuts,” he wrote.

The governor also eliminated a proposal from the budget that would have blocked local governments from regulating blasting at rock quarries without state approval.

The proposal, which was similar to one vetoed by former Gov. Scott Walker in 2017, would also have prohibited local governments from creating air and water quality standards.

“I am vetoing these sections because I object to this change to local authority occurring without the opportunity for public debate outside of the budget process,” the governor said in his veto message.

Supporters of the measure have said local regulations, which can govern things like operating hours, are onerous and go far beyond state and federal rules.

In another move, Evers eliminated a $5-million earmark for a state land purchase in Green Bay. The money was specified for land intended to house a new maximum security prison.

Evers did not eliminate the $5 million from the state Department of Corrections budget, but deleted the requirement that it must be spent on the land purchase for the prison.

“I am partially vetoing this provision because I object to building a new maximum security correctional facility as we continue to explore needed criminal justice reform in Wisconsin,” he said in his veto message. “The current population pressures facing the Department of Corrections are being experienced primarily in minimum and medium security facilities, and while I am supportive of finding a solution to these pressures, I am not supportive of the insertion of a project for the construction of a new maximum security correctional facility late in the budget process and without the opportunity for more robust public input.”

The governor also deleted a study of state Capitol security, which Republicans proposed to be completed in cooperation with the Madison Police Department.

During committee debate, Democrats pushed back on the proposal, saying Republican lawmakers behind the plan were placing a burden of the city of Madison without adequately consulting with local law enforcement about the plan.

“While I strongly support ensuring the safety of visitors and employees who come to the State Capitol, I object to releasing information about potential security vulnerabilities in a public report as it would negate the very efforts of this study,” the governor said in his veto message.

The governor, noted, however that he is directing Capitol Police to “review and update, if necessary, its existing plans for the security and safety of the State Capitol, including input from the Madison Police Department.”

Editor’s Note: The original story cited an $87 million K-12 spending increase by the governor. It was updated to $65 million after additional information became available to WPR about an education spending cut also included in the governor’s veto message