By Shawn Johnson, Wisconsin Public Radio - Jun 30th, 2019 07:25 am
Get a daily rundown of the top stories on Urban Milwaukee 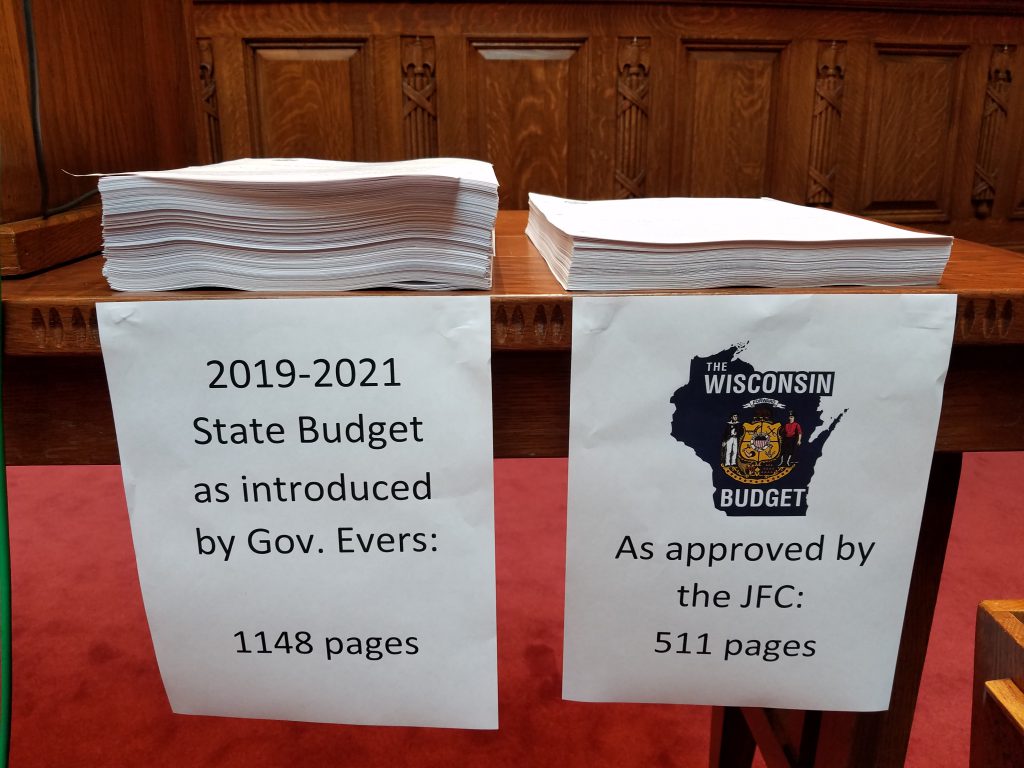 Republicans stacked a paper copy of Gov. Tony Evers’ budget bill next to their own on the day the Wisconsin Assembly passed its version of a two-year spending plan. The GOP budget bill is the shortest in decades. Photo by Shawn Johnson/WPR.

Everyone knows you shouldn’t judge a book by its cover, but there’s a chance you could learn something by counting the pages in a state budget.

It’s not that the length of a budget says anything about whether it’s good or bad. Short budgets can spend lots of money. Long budgets can be frugal. A single sentence or dollar figure can go a long way toward setting public policy.

But fewer pages means fewer words. And fewer words means fewer chances for a Wisconsin governor like Tony Evers to reshape the budget once the Legislature sends it to his desk.

“In the case of this budget, it seems to me that if you have a short bill, then to a certain extent you’re giving the governor fewer opportunities for line-item vetoes,” said Mordecai Lee, a University of Wisconsin-Milwaukee professor, a former state senator and a longtime observer of Wisconsin’s budget process.

“I think we’re seeing a real behind-the-scenes strategy here by the legislative leaders knowing that they’re going to face the opportunity for a governor to reshape a budget,” Lee said. “They’re giving him as few opportunities as possible to be able to do that.”

The Wisconsin budget bill Republican lawmakers passed this week is shortest in decades, and it’s not even close.

When it passed the Legislature’s Joint Finance Committee, the bill was 511 pages. The budget bill introduced by Evers in February was 1,148 pages.

Assembly Speaker Robin Vos, R-Rochester called attention to the difference during a press conference before the budget vote. Next to Vos were paper copies of the governor’s budget bill the Republican alternative.

“When Gov. Evers introduced his request in February, the document was a massive liberal wishlist, more than 1,100 pages filled with policy to appease Democrats and their special interest allies,” Vos said. “For those of you who are keeping count, we cut the number from the original document by more than half.”

That’s not to say Republicans are averse to longer budgets. They’ve written several.

In fact, every budget bill passed out of the Legislature’s Joint Finance Committee over the past two decades has been more than 1,000 pages.

That includes the four budgets GOP lawmakers passed when Republican Scott Walker was governor. Those budget bills averaged about 1,400 pages, or about 250 pages longer than the budget Evers introduced.

But Lee said it could matter when it comes to Evers’ ability to use his partial veto power.

“That reduces the opportunities for a governor to line-item veto some changes he doesn’t like because it’s not presented,” Lee said. “It’s not in the bill.”

While Republicans have reduced the power of the Wisconsin governor’s office in other ways, Evers’ veto power gives him broad authority to reshape appropriations bills like the budget.

In a report issued earlier this year, the nonpartisan Legislative Reference Bureau called the Wisconsin governor’s partial veto power “unique across all states.”

Republicans are well-aware of those powers. Vos said Tuesday that they tried to make the budget as “veto-proof” as possible.

For example, they made several, subtle tweaks to the language of the budget with the governor’s veto powers in mind.

“This amendment simply seeks to clarify the Legislature’s position to ensure that the governor cannot use his veto authority to subvert the will of the body,” Steineke said. “Period.”

Lee said it’s important to note that while Evers’ budget power is still broad, there are limits to what he can do to a budget.

“We have to remember that a line-item veto can only reduce a number,” Lee said. ” You can’t increase a number.”

So, for example, when it comes to education funding, Republicans passed a $500 million increase for K-12 schools. That’s about $900 million less than Evers wanted, but he can’t use his veto pen to put the money back.

Lee said Evers could veto the entire budget if he wants to restart negotiations and push for a better compromise, but such a move would be unprecedented in Wisconsin.

The Legislative Reference Bureau says no Wisconsin governor has ever vetoed an entire budget outright since the state moved to a biennial executive budget in 1931.

Evers’ office didn’t respond to a question about whether the length of the budget would restrict his partial veto options, and whether that concerned him.

The governor has consistently kept his options open when it comes to vetoes, saying he needs to consider the budget in its totality before making final decisions.

Evers tweeted Thursday that he had called on the Legislature to send him the budget bill, a procedural step that begins a countdown for the governor. Once the bill is sent to his desk, Evers has six days, not counting Sundays, to act on it.

If he uses his partial veto powers, 500 pages will give him plenty of room to make changes — just not as much room as his predecessors.

Budget Bill Before Evers Is Shortest In Decades was originally published by Wisconsin Public Radio.