By Shawn Johnson, Wisconsin Public Radio - Mar 11th, 2019 11:33 am
Get a daily rundown of the top stories on Urban Milwaukee 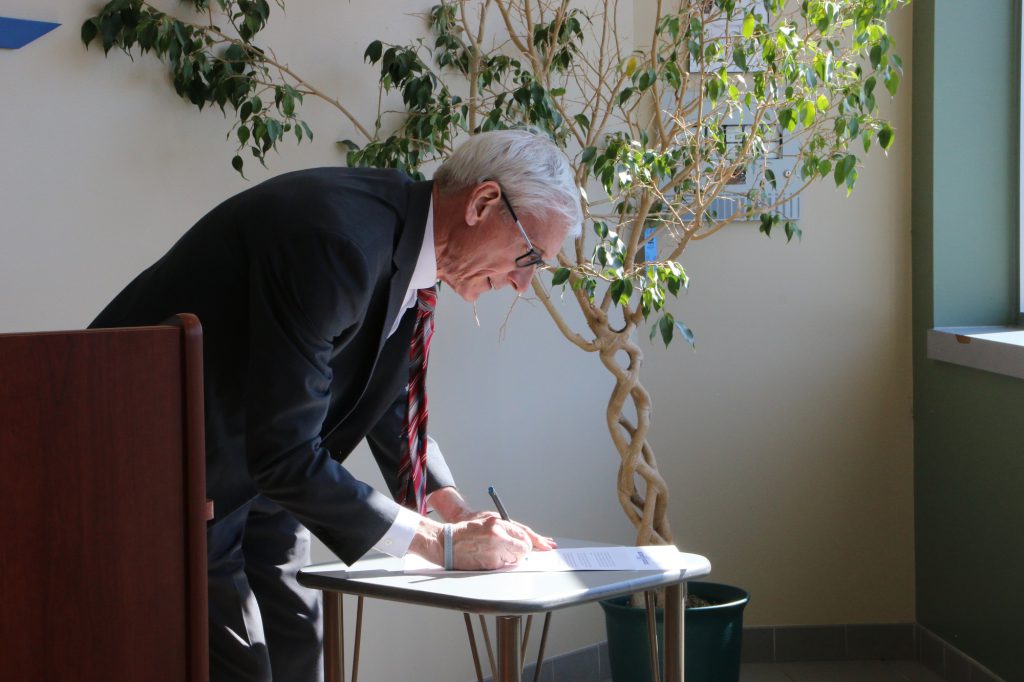 Governor Tony Evers. Photo from the office of the Governor.

Gov. Tony Evers unveiled a capital budget Thursday that calls for $2.5 billion in new building projects around the state, an amount larger than any capital budget approved by former Gov. Scott Walker.

The state would borrow roughly $2 billion to pay for the budget, which includes more than $1 billion in new building projects throughout the University of Wisconsin System.

“This will be something that lots of people can find projects that they’ll appreciate,” said state Department of Administration Secretary Joel Brennan at a Wispolitics forum Thursday in Madison.

Among the projects included is a $109 million science and health sciences building at UW-Eau Claire, a $128 million expansion and renovation of UW-Madison’s veterinary medicine building, and a $130 million chemistry building at UW-Milwaukee.

Also in the capital budget is about $99 million for a new state office building in Milwaukee and funding for a new Wisconsin Historical Society Museum, which would be paid for by $70 million in state funding and another $30 million in private donations.

While the overall level of spending is less than the $1.9 billion the university requested, UW System President Ray Cross issued a statement praising the plan.

“We appreciate that the governor recognizes many of the challenges in facility repair, renovation and replacement that the University of Wisconsin System is facing,” Cross said. “Our challenges are significant as we seek to update antiquated buildings and systems to ensure the safe and modern learning environment students expect.”

Brennan said a backlog of building projects was part of the reason the capital budget would borrow so much more than it did in recent years.

“There’s so much of the stock of buildings at the university system that were built in the 50s and 60s and there is a lot of it that is getting beyond its usable life all at the same time,” Brennan said. “So I think there’s an opportunity there to make some investments that are not only doing things to make sure that we’re replacing buildings that are old but forward thinking and looking at where are we going in terms of economic development and workforce development in the state.”

The overall capital budget would be two-and-a-half times larger than the last one approved by Walker, and it would borrow about three times as much.

It would also be roughly three times as large as Walker’s previous capital budget from 2015, which only borrowed about $100 million. Walker touted the low level of capital borrowing that year as he defended his transportation budget, where he proposed borrowing $1.3 billion.

“Really sounds like the People’s Budget … so long as those people live inside the MSN/MKE bubble,” tweeted Assembly Majority Leader Jim Steineke, R-Kaukauna.

“At a first glance, the level of spending and bonding is alarming,” said Senate Majority Leader Scott Fitzgerald, R-Juneau. “We’ll continue to review the capital budget proposal and discuss it as a caucus moving forward, but Senate Republicans are committed to protecting hard-working Wisconsin taxpayers.”

Not everything made the cut in the capital budget. Funding for a long-discussed convention center in Milwaukee was not included.