Fightin' Bob is walking away. Zamarripa and Bielinski likely to run for council seat. 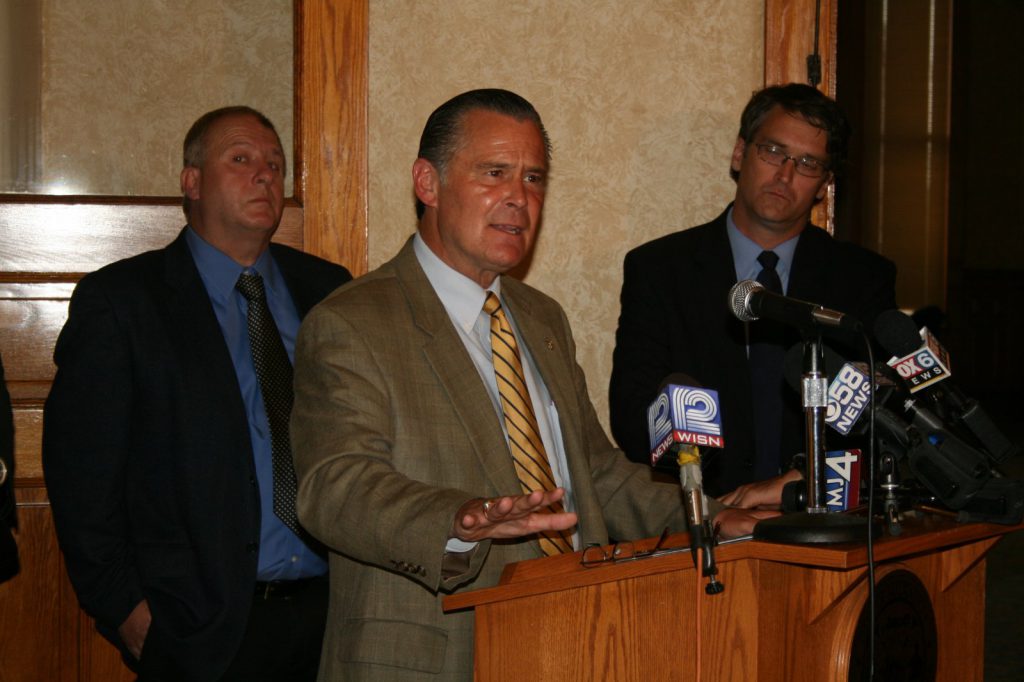 One of the loudest voices in city government is calling it quits.

Alderman Robert Donovan, who has represented his southside district since 2000, will not seek re-election. He announced the news in a letter to his constituents Saturday.

“I leave with no regrets. I have fought for you all and for this great City as best as I knew how and believe I will leave behind a legacy of service, honesty, and common sense. Borrowing, if I may, from Gen. MacArthur, serving as an elected official was the “fulfillment of many of my boyish hopes and dreams,” said Donovan in the letter.

The alderman, branded Fightin’ Bob, is well known for his frank assessments and willingness to use his position as a bully pulpit to push for what he feels is right, even if its unpopular and draws the ire of his colleagues. He is the council’s most prolific press release author.

But Donovan isn’t resigning, and has no intentions of mailing the next year in. “April 2020 is, in some ways, a fair distance off and I, and [legislative assistant Patty Doherty], will be here and out in the district as we always have been until then. I may even have a press release or two in me yet. One more year to give ‘em hell!”

Common Council seats are non-partisan, and Donovan has identified himself as a “proud non-partisan” in the recent past, but when it came to public safety he often stakes out a conservative position. The alderman, who ran twice as a Republican for state assembly in the 1980s, is a vocal champion of rank-and-file police officers and firefighters.

Donovan ran unsuccessfully for mayor in 2016, challenging Mayor Tom Barrett after years of attacking the mayor’s policies. Running for his aldermanic seat at the same time, Donovan managed to hold on to the post by only a slim 161-vote margin.

When Donovan walks out of his District 8 office for the last time, it will signal a changing of the guard at City Hall. The alderman is the second longest-serving member of the Common Council, behind only Michael Murphy.

His district, through the 2010 redistricting process, has changed dramatically in his 19 years in office. Donovan, who proudly touts his Irish heritage, now represents a majority Hispanic district, which made his reelection to another term far from certain.

Donovan’s announcement doesn’t say what the 62-year-old will do next, but he promises to remain active. Thanking his wife Kathy, Donovan said: “we will both be engaging in the “Four Fs: Faith, Family, Friends, and Fun.” The Donovans have five children.

Donovan’s decision not to run opens the door to two individuals who were both rumored to be likely challengers in 2020, political strategist Justin Bielinski and State Rep. JoCasta Zamarripa.

Zamarripa, who has served as a Democrat in the state assembly since 2010, left no doubt about her intentions Saturday night. Sharing the news that Donovan was out, Zamarripa had two words: “I’m running!”

Her assembly district, also the 8th, overlaps with the eastern portion of 8th aldermanic district and a large amount of 12th aldermanic district currently represented by Jose G. Perez. Zamarripa will be able to run without giving up her assembly seat because non-partisan elections are held in the spring. But, should she win, she’ll have to move. Zamarripa currently lives in Perez’s district according to her voter registration.

Justin Bielinski, who served as campaign manager for Lieutenant Governor Mandela Barnes successful campaign, is likely to run according to multiple sources.

A Burnham Park resident, Bielinski will bring a considerable amount of boots-on-the-ground experience to the race. He ran against Donovan in 2016, losing by only 161 votes while Donovan enjoyed substantial name recognition from incumbency and his mayoral run.

The political strategist is currently serving as a senior advisor to Bob Peterson‘s campaign for the citywide Milwaukee Public Schools board seat. In a statement to Urban Milwaukee, Bielinski said: “I am humbled by the outpouring of support I’ve received from supporters in the 8th District since Alderman Donovan announced his retirement. From now through April 2nd I am focused on electing a champion for public education to our MPS School Board, Bob Peterson. I have no announcement to make at this time, but will be sure to make my intentions known shortly after the spring elections.”

A number of other candidates could join the race as well. When Jim Bohl resigned in 2018, six candidates vied to fill his vacant seat. A primary for Donovan’s seat, if there are more than two candidates, would be held in February 2020.

Whatever happens, the Common Council will look drastically different in 2020 than it did in 2018.

Bohl was replaced by Nikiya Dodd, increasing the number of African-Americans on the council to seven.

Ald. Tony Zielinski, who announced his mayoral campaign over a year ago, has reiterated his promise not to run for reelection to his aldermanic seat. County Supervisor Marina Dimitrijevic is expected to announce her candidacy for the seat in the coming weeks.

Donovan’s departure will only further shift the 15-member council’s makeup to one that is younger, more diverse and more liberal than past councils.