How Sanctuary Woods Was Saved. Almost

Actually still some work to be done. Why the effort matters. 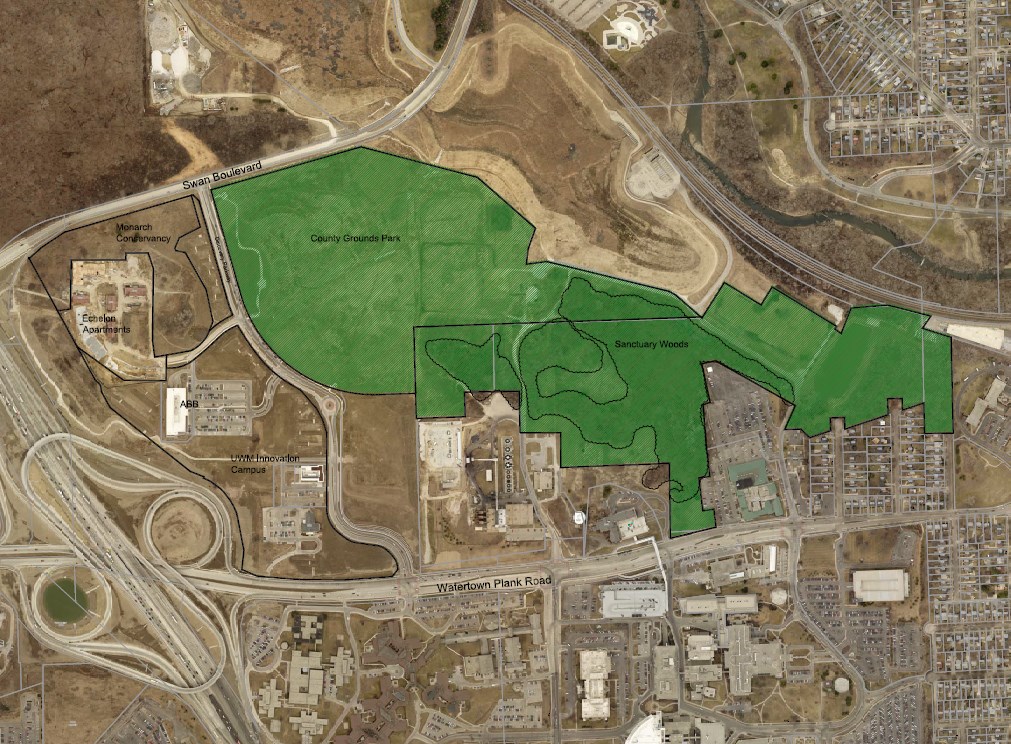 At their Dec 18 meeting, the Wauwatosa Common Council approved a long-delayed and greatly-revised Life Sciences District Master Plan for incorporation into the City of Wauwatosa Comprehensive Plan. The District includes the County Grounds which has a remnant of old-growth forest, a grove of majestic white oaks, on the 58-acre tract which has become known as Sanctuary Woods. Now included in the plan is a provision that the Woods be re-zoned as a Conservation District. Revisions adding protection for the Woods were made by city staff working with County Grounds Coalition representatives in December. Alderman Jason Wilke’s amendment at the meeting strengthened those protections.

Sanctuary Woods is a refreshing natural area cherished by many Wauwatosa residents, especially dog-walkers. In the Northeast Quadrant of the County Grounds, north of the Ronald McDonald House, it borders County Grounds Park to the north, a perfect neighbor. The Woods is the last piece of the Grounds which remains undisturbed by development.

The Life Sciences District (LSD) plan became controversial soon after it was introduced in early 2017 because, while it used language respectful of the natural environment in the District, it was obviously a blueprint for extensive development with high-rise residential and commercial buildings. The plan was written for city administrators by consultants with backgrounds in real estate development.

The LSD plan is the latest in a history of gradual development of the County Grounds which continued largely undeterred by periodic public protests. In the 1960s, the Grounds comprised about 1,000 acres north and south of Watertown Plank Road roughly from Harwood Avenue near the village west to about Highway 100. It was largely fields and woods. Back then the “county institutions” were not much more than County Hospital and a few medical and social service buildings in a park-like setting south of Watertown Plank Road. A few handsome old county buildings survived in the fields and trees north of Watertown Plank.

By 2016, the Milwaukee Regional Medical Center had grown to be a dense agglomeration of large buildings, most of them clad in plain glass, some as tall as six stories  – a mini-city of hospitals, office buildings, parking structures and stop lights. To the west of I-94, the Research Park was nearly full with massive business buildings. To the north of Watertown Plank, there was Discovery Parkway and cliche modern buildings on a right of way gouged deeply into the sloping terrain where there used to be a savanna of oak and maple.

When driving west out of Wauwatosa on Watertown Plank years ago you enjoyed the drive and felt almost as if you were on a scenic route. Now you’re glad when you get through without a traffic delay.

So when the LSD plan became public, with its proposals for extensive additional development and urbanization described in the latest developer’s jargon such as “mixed-use”, and even though it had beautiful architectural renderings, it stimulated a reaction from the public which bordered on revolt.

The plan was first made public by the BizTimes which had obtained a draft of it and reported on Dec 19, 2016: ”Wauwatosa officials have been meeting with a team from Milwaukee-based engineering firm GRAEF for more than a year to develop a master plan for the area around I-94 and Watertown Plank Road.” “The robust plan .  . . envisions Watertown Plank Road . . . becoming a central business corridor connecting to Wauwatosa’s village area… “The plan includes more density in the form of retail, restaurants and housing . . . (to)allow for 6,500 housing units, 250,000 square feet office space and 70,000 square feet of retail. The estimated annual tax revenue generated by this additional development would be $40 to 50 million.”

The citizenry was further informed by an article by Eddee Daniel in Milwaukee Magazine Jan 09, 2017 entitled “Wauwatosa Master Plan Would Bulldoze Last Corner of County Grounds”. The subtitle read: “Must ‘Sanctuary Woods’ be sacrificed for retail and residential development?” Wonderful photographs depicted the beauty of the Woods.

The ensuing public meetings held by the City of Wauwatosa drew overflow crowds, the first two at city hall, Jan 17 and Feb 7. On March 11, Grassroots Wauwatosa staged a public forum on the future of the County Grounds featuring leaders of local environmental groups as speakers: Jim Price, Monarch Trail; Dianne Dagelen, Sierra Club; Cheryl Nenn, Milwaukee Riverkeeper; Nancy Welch, Alderperson; and Barb Agnew, Monarch Trail. It drew about 200 people. A third city-hosted meeting took place in the Muellner building in Hart Park on April 6, 2017, and drew about 300 people, practically all of whom spoke in opposition to the LSD plan. They told their reasons for conserving the woods: natural beauty, peace and quiet, wildlife habitat, historic preservation and increasing the market values of properties near it.

In the continuing approval process, a series of public hearings were held at Wauwatosa’s City Hall by the responsible committees. People turned out in great numbers to question the plan – the largest steady turnout of people that anyone could remember. Credit the County Grounds Coalition with its well-timed and informative messages written by chairman Peter Abbott.

On May 9, 2017, after a recommendation by the Community Affairs Committee, the Common Council voted to ask the county to re-zone the wooded County-owned land as conservancy. On May 25, Milwaukee County responded by passing a resolution in support of making the wooded area a park. In September, a zoning application was received by the city, but it was fraught with exclusions of environmental land and gerrymandering of commercial land to allow for possible development in the area to the west of the Woods where the vacant Food Services building exists.

On Oct 12, 2017, the Woods received national recognition when the Cultural Landscape Foundation (CLF) included it on their annual list of threatened landscapes. It lent credibility to local conservation efforts.

Dissatisfied with the re-zoning request by the county and buoyed by the CLF recognition, many Tosa residents rallied and filled the chamber of the County Parks Commission’s Oct 24 meeting in the Milwaukee courthouse to ask that the county re-write the re-zoning application.

After months of uncertainty, on June 20, 2018, Alderman Matt Stippich issued a request to the Community Affairs committee to modify the LSD plan to call for zoning the wooded county-owned land as a Conservation District with the Sanctuary Woods area clearly defined on a map in the plan document for the first time.  It passed, to applause by the audience, in their Oct 26 meeting. On Oct 8, the Plan Commission followed suit.

On Dec 4, the Common Council held another public hearing on the LSD plan. Again the subject drew a crowd that filled the chamber, 25 of whom spoke. Barb Agnew reiterated her request for specific ecological protections. City officials complied, adding wording to the plan before it was up for approval on Dec 18.

In order for Sanctuary Woods to be conserved, it needs to be re-zoned as a Conservation District, which the city has the authority to do. However, it needs the cooperation of the landowner which is Milwaukee County, especially since the land is in parcels with boundaries which do not correspond exactly to the boundaries of the Sanctuary Woods as described in the LSD plan.

The county has indicated its intention to respect the wishes of the City of Wauwatosa as laid out in the new LSD plan. However, the county must deal with a proposal from a developer to do a project on a parcel to the west of the Woods which also encroaches on the Woods. This current situation is reminiscent of September 2017 before the County submitted a zoning application which was unacceptable to the city.

Let’s hope that the County remains steadfast in its respect for the LSD plan and works out a reasonable policy for potential developers of land on the borders of Sanctuary Woods, and that city officials work with the county to accomplish the objective of conserving the Woods.

Charlie Mitchell is a life-long conservationist and preservationist. He is a member of the Wauwatosa Historic Preservation Commission, the board of directors of Citizens for a Scenic Wisconsin and of Partners in Forestry. He attended most of the meetings about the county grounds and spoke at many of them.