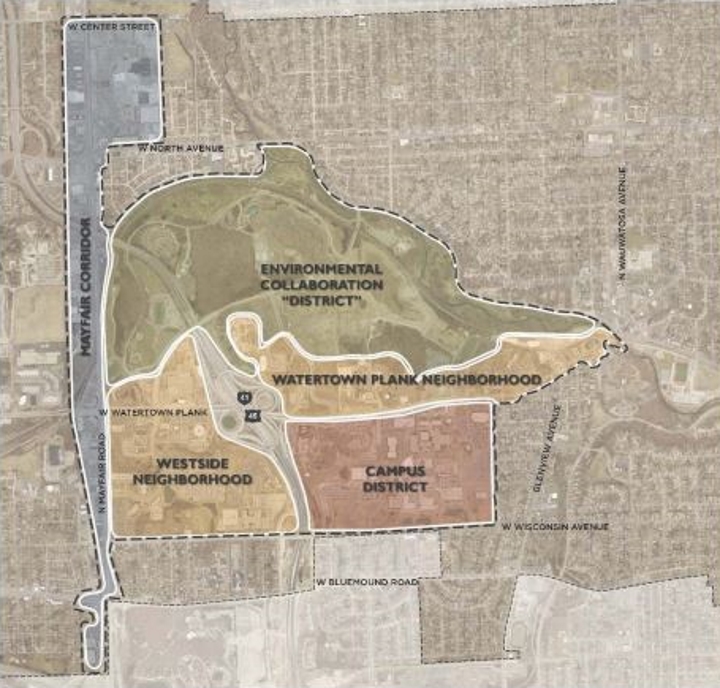 The City of Wauwatosa continues to move forward with a new master plan for a large area of the city, roughly 1,200 acres, but a piece of that land, called Sanctuary Woods, has become a focal point of opposition from environmental activists.

The planning document focuses on an area commonly called the Life Sciences District. Once incorporated into Wauwatosa’s comprehensive planning document, it will become the guide for future development in the area. The district falls in the County Grounds, where the Milwaukee Regional Medical Center is located and which also includes the largest remaining open space in Milwaukee County.

Residents’ concerns regarding the master plan fall on everything from allowed building heights to the public infrastructure costs outlaid on resident tax bills. But the hot coal in the fire is a 52-acre piece of untouched land colloquially referred to as Sanctuary Woods.

Sanctuary Woods is part of the northeast quadrant, the last quadrant in the county grounds not touched by development. But it is now planned for development in the city’s Life Sciences District Master Plan.

Despite not being designated park land, Sanctuary Woods has been used as such for years. It’s also a “critical habitat” for a number of species, including the Long-eared Owl, according to Milwaukee Riverkeeper. DNR records show the Long-eared Owl is fully protected by federal and state laws under the Migratory Bird Act.

Battles over preservation of the county grounds go back decades, and have mostly been defeats, as all but the last quadrant have been opened up for development. In fact, according to Milwaukee Riverkeeper, a nonprofit advocate for environmental protection, it was during one of these earlier battles that Wauwatosa created a new zoning designation for conservancy, but it has never been used on any portion of the County Grounds. This latest battle over the new master plan has been playing out since 2016.

In May 2017, the community affairs committee of the Wauwatosa Common Council placed five conditions on the plan to be met before the committee would take the plan back up. Thus far, all have been met save one: “Action by Milwaukee County to preserve in perpetuity the land commonly known as County Grounds and Sanctuary Woods.”

Because Sanctuary Woods is owned by Milwaukee County, it must take action to preserve it for posterity, even if Wauwatosa zones the land as conservancy.

The public is largely opposed to the master plan, as it sits, based upon the reaction at a public hearing Tuesday evening. In short, people want the woods protected. But there has been no formal protection enacted for Sanctuary Woods by Wauwatosa or the county.

Barb Agnew, co-founder of Friends of the Monarch Trail, admonished the Wauwatosa council to make language in the plan surrounding development requirements specific. This was a common theme among public speakers: they felt the language in the master plan was too vague to offer solid protections for the natural areas.

Agnew was essentially in agreement with the current draft of the plan, but said, “Our collective goal to preserve the natural areas of the county grounds’ northeast quadrant can be a win for development and a win for conservation, but let’s get the details right. Let’s state them at the outset.”

Cheryl Nenn of Milwaukee Riverkeeper, also expressed support for the latest iteration of the plan. Milwaukee Riverkeeper was formed in 1995, originally called Friends of the Menomonee River, and its first initiative was a campaign to protect the county grounds from redevelopment.

Nenn said that language in the plan saying the intent was to rezone the woods for conservancy was a good step forward. But many other residents questioned whether the intent expressed in the master plan would hold without concrete action now. Nenn stressed the importance of permanent preservation of this land by the county and urged the Wauwatosa council to “deal with this log jam that has stopped the preservation efforts on the county’s side.”

Nenn noted the defeats of the past: “Because we’ve really seen the county grounds suffer the death of a thousand cuts over the last few decade,” she noted, “it’s really important that that area has some permanent protection put in place for it.”