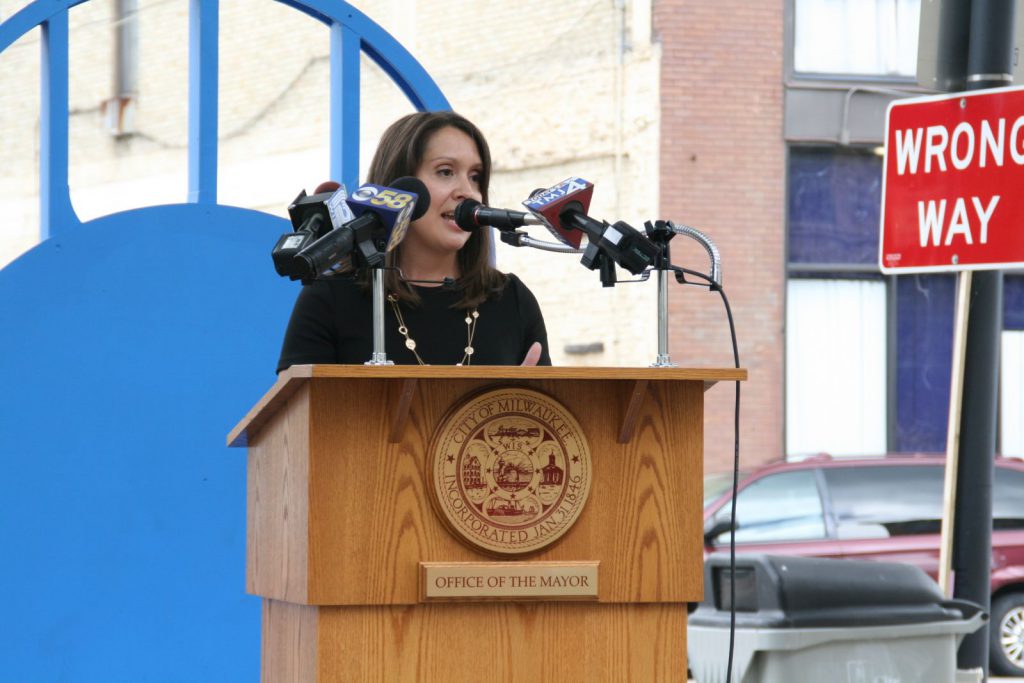 Dettmer, who has worked for the City of Milwaukee for 12 years, received unanimous approval from the Common Council’s Public Works Committee Wednesday morning, but not before being grilled on everything from planned rate hikes to the politics of suburban water sales to replacing lead laterals.

Dettmer, who holds a bachelor’s degree in architectural engineering and master’s degree in environmental engineering from the Milwaukee School of Engineering, described the promotion as “going back to her roots” in a brief speech before the committee.

In response to a question from Alderman Cavalier Johnson about the Water Works’ role in lead poisoning abatement, Dettmer said she looks forward to working with new health commissioner Jeanette Kowalik to clarify “confusing rhetoric” that comes from the city. “I think we have made some strides, but we certainly could do more community outreach,” said the appointee.

The Milwaukee Water Works, which had a $92 million budget in 2018, is responsible for lead lateral replacement. The city-owned entity sells water to 16 municipalities. The 2018 budget lists the division as having 406 employees.

Dettmer replaces Jennifer Gonda, who resigned from the position in October to take a job with UW-Milwaukee. Gonda spent a number of years as the city’s top lobbyist. Prior to Gonda, Carrie Lewis served as head of the division from 1997 to 2017.

Lead laterals, one of many potential sources of lead poisoning in older homes, have become a hotly-debated issue in recent years. Dettmer, who lives in a home with a lead lateral, stressed the need for more education around the issue, including with flushing techniques and filtering.

Dettmer received backing from Ald. Nik Kovac and others on the committee that wholesale replacement of laterals might not be the panacea some have insisted and that paint is the major lead poisoning source.

The cost of replacing the publicly-owned portion of the approximately 70,000 lead laterals in Milwaukee was estimated at $750 million in early 2018. “That’s a major investment and, based on the Madison experience, would achieve almost nothing,” said Kovac. A 2008 study of Madison’s effort to replace all of its lead laterals found that only 49 percent of the lead in water as coming from the lateral, with 38 percent coming from interior faucet or premise sources.

“It would be nice if we tested the water more aggressively,” said Kovac referring to the Health Department‘s follow-up visits to homes of children that have tested positive for elevated blood lead levels. Dettmer said one of her goals was to increase the 10 percent response rate of residents that agreed to free water quality tests before and after water main replacement projects. The tests are intended to detect the impact of lead leaching from disturbed lines. The city, by state regulation, replaced 18 miles of water mains in 2018. None of the mains are made of lead.

Kovac stressed that he wasn’t suggesting halting lead lateral replacement. The city mandates full replacement of lead laterals in the event of a break. “As long as we’re down there underground, cutting into a pipe, sure let’s replace a lateral,” said Kovac. Dettmer said she would continue to investigate ways, including a rate increase, to expand or maintain the city’s financial support for privately-owned lead lateral replacement.

Dettmer told the committee that the city will be seeking an increase in water rates from the state-run Public Service Commission and has retained a consulting firm to advise on the matter. The committee supports the change, and chair Robert Bauman, in particular, raised concern that Dettmer didn’t wholeheartedly endorse the measure.

“Water is in cheap in this city,” said Bauman, adding that no one knows what they’re paying except the big industrial customers. “Miller knows, but the average homeowner doesn’t.”

Kovac also endorsed a rate hike. “We not only get tax-exempt people, but we get suburbs on water,” said the alderman about who pays. He said unlike other fees, charging by consumption also provides the opportunity to cut back, lessening the impact.

Fiscal hawk Ald. Michael Murphy added: “In the past we have been barely able to recover the costs for operations, let alone for debt.” Murphy had repeatedly questioned Dettmer on ways to raise funds for capital projects other than debt, and expressed concern that Dettmer didn’t have experience running a utility.

But Dettmer’s lukewarm support for a large increase could stem from who appoints her. “I’m checking my watch. About 15 months more of timidity on the issue,” said Kovac referencing the upcoming mayoral election.

The city must make its case for a rate increase to the Public Service Commission. Dettmer indicated that appointees of newly-elected Governor Tony Evers would likely be more sympathetic to the city’s case, including the cost burden of replacing lead laterals.

Bauman raised a number of other concerns with Dettmer’s appointment, and at one point suggested holding the matter. He suggested she would need to learn quickly on the job, having admitted to visiting only one of the city’s two water purification plants in the past. Dettmer said that she would rely on the plant manager for support.

The alderman also raised concern with Dettmer’s remarks on right sizing the utility, which he took as an endorsement to sell water to any suburb that wanted it. Bauman, a staunch advocate for urban living, has frequently opposed suburban water sales as city-supported suburban sprawl. The city has pending water deals with Waukesha and Franklin.

Despite the unusually difficult questioning, the committee unanimously endorsed the appointment.

Dettmer is far from the only new Barrett appointee. The mayor has had to make a number of cabinet changes recently in the wake of resignations, retirements and promotions.

With the promotion of Jeff Polenske to Commissioner of Public Works, a vacancy was created in the cabinet-level position of City Engineer.

Barrett didn’t waste any time appointing another long-time Department of Public Works veteran to the post. Samir Amin, who most recently ran the Transportation Infrastructure division, was confirmed by the council on December 18th.

Amin, who has been with the city since 1989, touts completion of the streetcar project construction, which he served as manager on, as one of the biggest accomplishments on his resume. He has a bachelor’s degree in civil engineering and a master’s degree in structural engineering from UW-Milwaukee.

Interim Commissioner of the Department of Neighborhood Services

Following Governor Evers selection of Preston Cole as the new head of the Wisconsin Department of Natural Resources, the city again finds itself without a Department of Neighborhood Services Commissioner. Cole, who had been with the city since 1991, was appointed to lead the department in 2016 following the departure of Art Dahlberg.

Barrett appointed Thomas Mishefske to the role of temporary Commissioner while a national search is conducted. The measure was confirmed on January 14th by the council.