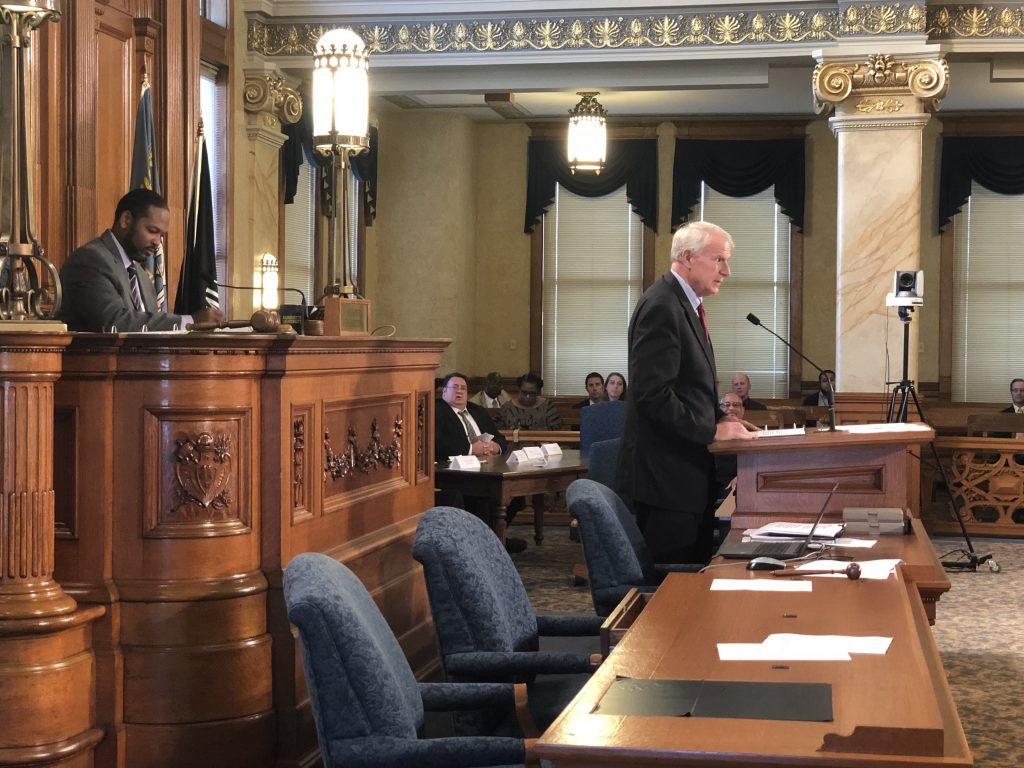 “The budget I am presenting is very tight, but the good news is we have avoided drastic cuts,” the mayor told the council.

Barrett, during a lengthy speech on the council floor, said the city still faces many of the same fiscal challenges it has for years now: limited state shared revenue and large pension obligations. “As you know, state shared revenue was created to have the state and municipalities together benefit from the revenue generated. Unfortunately, the state seems to have forgotten the word ‘shared.’ For years as state revenue has climbed, shared revenue has remained unchanged, or even been reduced. The state has tied our hands.”

The mayor again attacked the state about this near the end of the speech. “The State has created a situation that is fundamentally unfair. Thousands and thousands of people commute daily to Milwaukee from surrounding communities and visitors from out-of-town stay in our hotels, make millions of visits to local attractions and enjoy our public spaces. Yet, the state says they should contribute nothing to pay for police and fire protection or local streets? Nothing. Absolutely nothing.”

Barrett said “a typical homeowner can expect to pay a little less than an additional $50 next year” under his budget proposal. The city will again contribute nearly its entire property tax levy, budgeted to grow 2.4 percent this year, to the Milwaukee Police Department. The remainder of the city budget, $1.53 billion in 2018, is paid for via fees, state shared revenue and federal grants.

The budget maintains current staffing levels at the Milwaukee Fire Department, and Barrett said the department’s response time continues to exceed national standards despite cuts in 2018.

The mayor’s proposal would also add 10 new police officers to the force, and hire 100 recruits to address retirements and other staffing changes. The 2018 budget cut 27 police officers, via attrition, from the department.

The city, unlike many other government and private entities, maintains its own, fully funded pension system. The stress from that requirement caused the city to contribute an additional $22 million in 2018, bringing the total contribution to $83 million.

But while that $22 million increase required the city to eliminate positions within the Milwaukee Police Department and Milwaukee Fire Department, the city received a bit of good news this year.

Barrett doesn’t propose to immediately spend all of the 2018 pension surplus. “The reason we are putting the money in the Pension Reserve Account is we are still an outlier with our presumed rate of return. Most cities have assumed a lower rate of return,” Barrett told the council. “As tempting as it might be to tap into that money now, it would be an enormous mistake with dangerous implications for future city budgets. Acting responsibly is our only choice.”

The mayor’s budget proposal includes $20 million for reducing lead risks and abating lead problems. A portion of those funds would go towards replacing 1,000 of the more than 70,000 lead service lines in the city, something that the council has pushed to speed up. Barrett proposes doing much of this work in-house by creating additional positions with the Milwaukee Water Works. “This new approach will reduce the overall cost per project and add 15 new water works employees.”

Barrett singled out new Health Department commissioner Jeanette Kowalik for praise during his remarks. He told the council that under her direction “the Health Department is on track to address problems and improve accountability.”

During his State of the City speech, Barrett unveiled a plan to create or rehab 10,000 affordable homes over the next 10 years. His budget remarks didn’t provide specific insight into how the city might achieve the lofty goal, but did overview the approach. “We are identifying resources, engaging partners and working to improve the options for lower-income Milwaukee residents,” said Barrett. In an interview after the speech, Barrett said the city is “on track” to meet his goal.

The proposed budget includes funds for 25 miles of paving projects and replacement or lining of 23 miles of sewers.

The Mayor took time during his remarks to note that no streetcar operation costs are included in the budget. Barrett challenged project opponents to help work to make the project a success given that it will soon begin operating.

The Common Council’s Finance and Personnel Committee, chaired by alderwoman Milele A. Coggs, will now begin considering the budget item by item before presenting it for consideration to the full council on November 13th. Barrett, as he did last year, may then veto specific line items. The council would then consider any vetoes at its November 2018 meeting.