City Will Impound, Yet Legalize Scooters 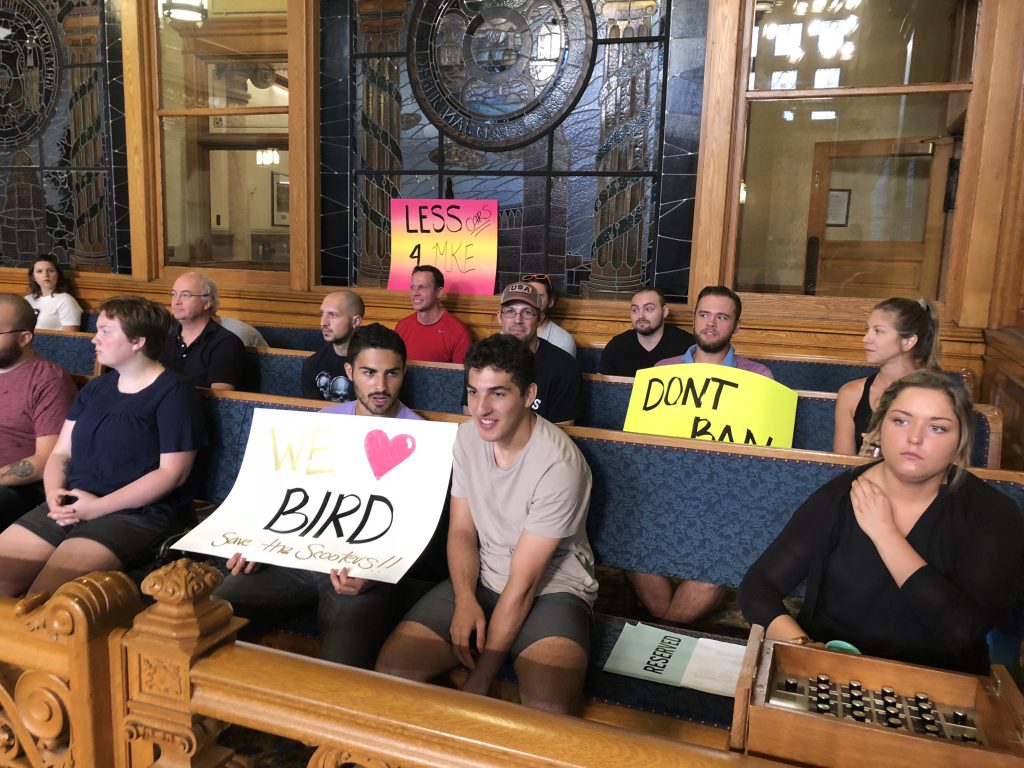 The Milwaukee Common Council has approved a path to legalize the controversial motorized scooters being deployed on city streets, while also authorizing police (or city workers) to impound the scooters until the state steps in to approve the city’s ordinance legalizing the vehicles. But the action was taken only after an amendment was made to soften proposed penalties and prohibitions by the city for those using the electric scooters.

An amendment introduced on the council floor by Alderman Robert Bauman removed a blanket prohibition on the vehicles, penalties associated with operation of the scooters and the mandatory participation in a pilot program upon state legalization. Bauman said the changes were made at the request of Mayor Tom Barrett.

Bauman introduced the amendment while a dozen supporters of Bird sat directly behind him holding signs requesting the city not ban the popular scooters.

The new framework grants the city the right to impound the vehicles, which the alderman expects the city to do, but also creates a clear pathway for the scooters to become legal. Following a determination by state officials that the scooters are legal or a change in state law by the legislature, the scooters would immediately become legal on city streets.

Assistant City Attorney Adam Stephens rendered an opinion in late June that the motorized scooters are not legal under state law and that the city does not have power to legalize them. The city filed a suit against Bird, the only dockless scooter provider operating in the city, after the company ignored a request to cease-and-desist operating in Milwaukee.

Bird dropped off 100 scooters on Milwaukee streets on June 27th, the first day of Summerfest and has since added more scooters to its Milwaukee fleet. The electric-powered scooters, which can go up to 15 miles per hour, can be rented via a smartphone application for $1 per ride plus 15 cents per minute.

The Common Council’s measure will not go into effect until Barrett signs the legislation and the measure is published in The Daily Reporter, the city’s paper of record. Bauman expects that process to take four to five days.

Until the vehicles are rendered street legal by the state, riders could still be subject to a $98.80 fine under the current state law for operating an unregistered motor vehicle. The first ticket was issued two weeks ago after a scooter operator crashed into a pedestrian on a sidewalk. But given the council eliminated the city fine it was considering, will police want to enforce the state fine? Unless there’s an accident involved, that seems unlikely.

The new measure was approved on a 12-to-2 vote with council members Khalif Rainey and Tony Zielinski voting in opposition.

Zielinski was the only council member to speak against the ordinance. “Procedurely I’m disappointed in the way this matter has been handled,” the alderman said. “It’s critical that we have a transparent, open government system.”

Zielinski said that a representative of Bird should have been allowed to speak when the file was before the Public Works Committee. Bauman, who chairs the committee, did not hold a public hearing on the matter when it was considered, but individuals were still able to submit written support or objections to the city.

Later in the meeting the Common Council unanimously passed a measure asking the state legislature to legalize the scooters.

One thought on “City Hall: City Will Impound, Yet Legalize Scooters”