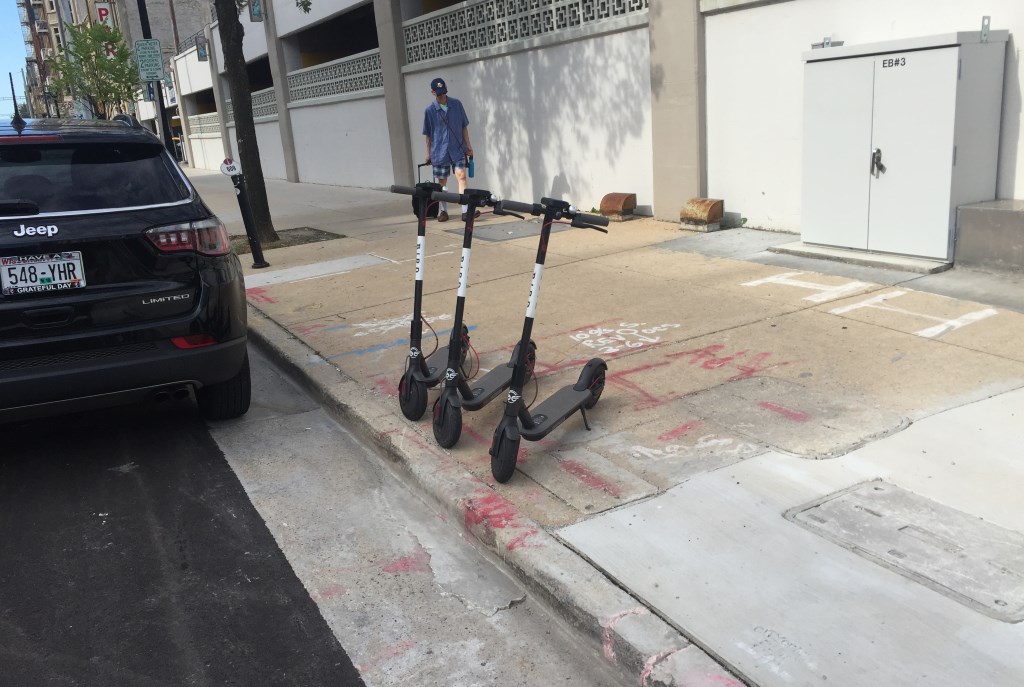 While the debate over motorized scooters plays out inside City Hall and the federal courthouse, one unlucky pedestrian on an east side sidewalk was knocked to the ground after a collision with a scooter Saturday. The crash caused the Milwaukee Police Department to issue its first citation to an electric scooter user for violation of a state law that governs the use of motorized vehicles.

According to a Milwaukee Police Department report, a 48-year-old male was struck by a Bird motorized scooter operated by 23-year-old Ryan Thies. The victim “reported pain to his face from being knocked to the ground.” The report indicates he was treated on site by the Milwaukee Fire Department.

The 23-year-old operator was given a $98.80 fine, but the city did not impound the scooter. The incident occurred on the sidewalk at 2639 N. Downer Ave. near the Nehring’s Sendik’s grocery.

The dockless electric scooters have been a source of local controversy since California-based Bird Rides dropped them off on the opening day of Summerfest. The independent City Attorney’s office rendered a legal opinion that the scooters are in violation of state law governing motor vehicles and therefore illegal to operate on Milwaukee streets or sidewalks.

Bird reports people have taken thousands of rides on its scooters in Milwaukee, and the company has increased the number of scooters available. The scooters, which can be unlocked by a smartphone application, cost $1 per ride and 15 cents per minute.

Last week Wednesday, the Common Council’s Public Works Committee gave initial approval to two ordinances regarding the scooters. One would allow the city to impound the scooters if they’re found parked on public streets or sidewalks following a decision from the independent City Attorney’s office that Bird’s scooters are in violation of state law. The second would create a legal framework for the dockless scooter companies to operate in Milwaukee, should the state legalize them first.

The Downer Avenue incident isn’t the first such collision. A pregnant woman reported being the victim of a hit-and-run on a Lower East Side sidewalk by a scooter operator and appeared at the Public Works Committee meeting on the scooters.

The full Common Council will consider the matter on July 31st, and if approved, it will be sent to Mayor Tom Barrett for his signature. The measure could go into effect in early August.

The Wisconsin State Legislature isn’t scheduled to be back in session until January 2019.