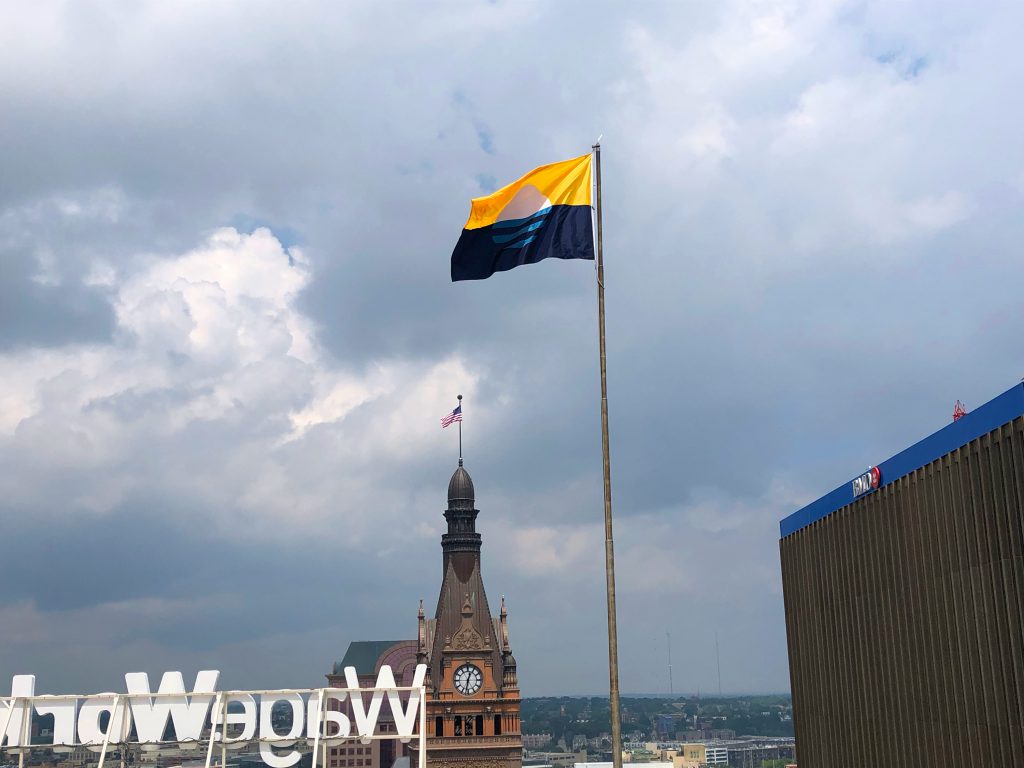 People’s Flag atop CityCenter at 735. Photo by Steve Kodis.

Just days before a Common Council committee is scheduled to vote yes or no on its approval, the largest “People’s Flag” in existence was installed atop CityCenter at 735.

The 15-foot-long flag was raised on the building’s flagpole Monday afternoon at the request of Compass Properties vice president Sheldon Oppermann. Compass, who owns and operates the 16-story building, just one block south of Milwaukee City Hall on N. Water St.

Oppermann is a supporter of the new flag. He tells Urban Milwaukee: “This is a great example of our city’s young talent hard at work, and if flying the flag encourages the debate and brings the process of adoption (or not) to the forefront, then, mission accomplished.”

Designed by graphic designer Robert Lenz, the new flag, known as “Sunrise over the Lake,” symbolizes a number of tried-and-true Milwaukee elements. The gold represents beer or wheat. The circle represents the sun rising over Lake Michigan. The blue represents the city’s connection to water, with the lake and Kinnickinnic, Menomonee and Milwaukee rivers. The three lines represent the city’s three founders, Solomon Juneau, Byron Kilbourn and George Walker, and how they merged their communities together to form Milwaukee.

The new flag, selected from a design competition led by Steve Kodis, would replace the hard-to-find city flag that dates back to 1955. Kodis, a graphic designer, was inspired to lead a contest to create a new flag as a way to engender civic pride.

The Common Council’s Steering and Rules Committee is scheduled to consider a resolution to make the “People’s Flag” the official city flag at its Thursday afternoon meeting. If confirmed, the full council could approve the matter on July 31st. The measure was first introduced in late May, but a June meeting to consider the flag was canceled.

The measure is sponsored by Aldermen Khalif Rainey and Cavalier Johnson. Says Johnson: “Milwaukee needs a symbol that we all can be proud of and rally around.”

Ald. Robert Donovan was previously listed as a sponsor, but city records indicate he requested his name be removed on July 17th.

An amendment, drafted July 18th at the request of Ald. Robert Bauman, would effectively table the matter by creating a new city-wide design contest. The amendment directs the city’s Arts Board to establish and implement a process for “consideration, review and possible recommendation of one or more designs for a new official City flag, if the Arts Board determines that a new flag is necessary.” The amendment would prevent the immediate adoption of the new flag.

The 1955 flag was designed by then-Alderman Fred Steffan. He took elements from submissions to a design contest and mashed them into one very busy flag. Matthew J. Prigge attempted to dissect all of the elements in 2015, including County Stadium and City Hall, but the history buff found himself stumped by at least one element. Further compounding the confusion surrounding this flag, there are actually two versions of it, the original and one that was later revised, simplifying and removing some decorative elements of City Hall and other images.

It became the subject of national ridicule in 2015 when Roman Mars singled it out in a TED talk as the worst designed civic flag in America. “Nothing can quite prepare you for one of the biggest train wrecks in Vexillological history. Are you ready? It’s the flag of Milwaukee, Wisconsin,” declared Mars before playing a clip of Kodis critiquing the flag. The two jointly ridiculed how the complicated flag design even includes an image of a flag on the flag.

But even if the current flag’s design wasn’t so weak, there’s also the fact that it’s so unknown. Try to find design files for either version of the 1955 flag and the appeal of the royalty-free people’s flag becomes immediately apparent.

The 1955 flag does have some defenders, although Matt Wild, one of the most high profile critics of Kodis’ effort to change the flag, has recently given up.

The measure is slated to be reviewed by the Steering and Rules Committee on June 7th. The full council could adopt the flag at their regularly scheduled meeting on June 20th, less than a week after Flag Day.

“There is such great energy surrounding this new brand image for the city,” Oppermann says. “We’re totally impressed at the grassroots and collaborative nature in which this flag was chosen.”

6 thoughts on “City Hall: All Hail The “People’s Flag””