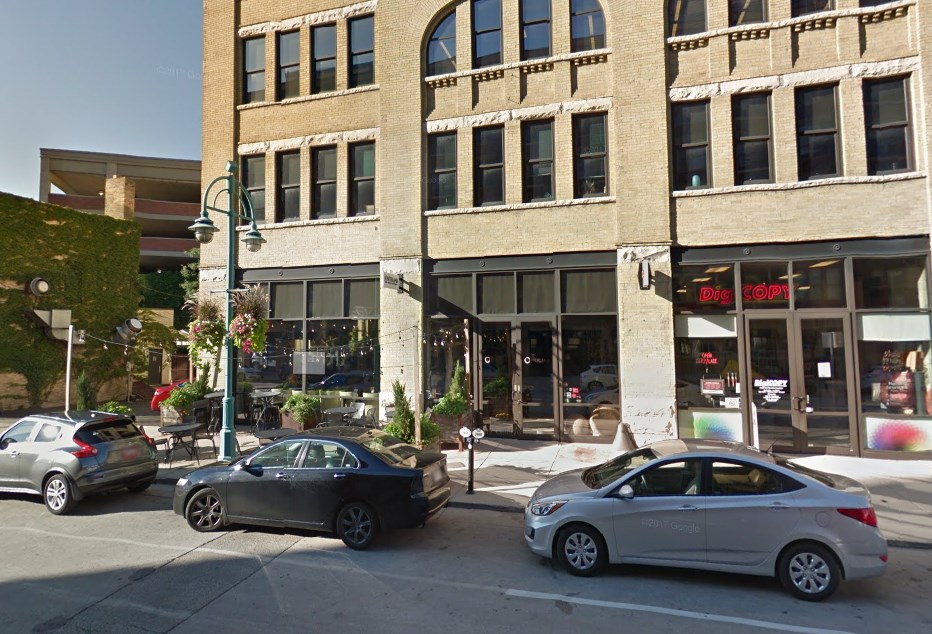 Funky Fresh Spring Rolls now has a permanent home inside the Shops of Grand Avenue (275 W. Wisconsin Ave.). The business uses local, fresh ingredients in its signature gourmet spring rolls, which are grilled and never fried. Funky Fresh Spring Rolls has previously offered its fare at farmers’ markets, sporting events and festivals. Following his own health journey, owner Trueman McGee started the food service in 2015 as a way to help people eat healthier. A grand opening event was held today from 10 a.m. to 7 p.m., complete with giveaways, raffles and a live DJ.

OnMilwaukee’s Lori Fredrich provides a glance at the menu:

Customers will also be able to enjoy the restaurant’s full menu, which includes signature spring rolls in flavors like Buffalo chicken and kale, broccoli chicken and mushroom, chicken club and sweet potato black bean ($3.50 each, three for $9, six for $15 or 12 for $30). There are also salads, including the mean green, mean green with strawberries and strawberry avocado cashew ($7-8), as well as fiesta quinoa bowls ($4 for small; $7 for large).

Funky Fresh will also open a location inside the Sherman Phoenix at 3536 W. Fond Du Lac Ave. The facility is expected to open in fall, and will have room up for up to 20 tenants.

Husband-and-wife team Lane Kim and Choonghoon Lee filed paperwork for their Korean fusion restaurant in November, and now their plans are being realized. Char’d will open on May 17 in the former Hinterland space at 222 E. Erie St. Smoothies and bottles of wine will be half priced during the first day of business. According to General Manager Hank Kim, the eatery will serve more as a cafe during lunch and will offer a full-service restaurant and grill for dinner.

Char’d will feature two separate menus for its lunch and dinner service. Noodles, sandwiches, salads and rice bowls will be the main focus of its lunch menu; and diners can expect dishes like kimchi poutine, bulgogi sliders and ramen bowls during that time. Meanwhile, Char’d’s dinner service will revolve around the Korean dish ssam, as well as tapas-styled shareable plates such as Korean gnocchi, “Korean-Fried Chicken” wings and scallion pancakes.

For drinks, Char’d will feature a menu of coffee, herbal lattes, smoothies, teas, frappes, wine, craft cocktails and beers, among other beverages.

Milwaukee’s first cat cafe has an official opening date. Sip & Purr Cat Cafe (2021 E. Ivanhoe Pl.) will mark June 1 with a grand opening event starting at 12 p.m. Owner Katy McHugh announced her plans for the business in January, which were inspired by a cat-friendly cafe she visited while in Amsterdam. Menu items will include small bites and house-made treats with vegan and gluten-free options available. The cafe will offer wine, beer and coffee from Ruby Coffee Roasters, as well as Healthy Roots Cold-Pressed Organic Juice. You can even sip on a “Juice-Tail,” made with your choice of vodka, tequila or rum.

As for the main attraction, Sip & Purr has partnered with Lakeland Animal Shelter to provide adoptable cats for patrons to hang out with in the cat lounge. All cats are microchipped, spayed and neutered, and up-to-date on vaccinations.

In a grand opening announcement, Sip & Purr provided these instructions for those interested in some “kitty cuddle time”:

The Casablanca in Brookmound Plaza will finally open this summer at 17800 W. Blue Mound Rd. It was supposed to open last May, but was postponed following a series of changes to the original plans. At 12,000 square feet, the Middle Eastern restaurant will now be twice as big as originally expected. Owner Alaa Musa says there is no official opening date, but is adamant on a June opening.

Musa spoke with the Journal Sentinel’s Carol Deptolla about the new design:

The first major change, he said, was to expand the first floor with a large dining area at the front of the restaurant, surrounded by large glass windows that can open the space to the outdoors in good weather.

The second major change was to add a second floor with a rooftop patio and bar. That’s similar to the expansion Casablanca underwent at 728 E. Brady St. in 2012, which also doubled its size.

Coming this fall, Beans & Barley (1901 E. North Ave.) will have a second location at the Mequon Public Market at Spur 16 (6300 W. Mequon Rd.). Beans & Barley will join a number of other Milwaukee-based restaurants and cafes inside the market, including Purple Door and Anodyne Coffee Roasting Co., as well as a St. Paul Fish Co. location adjacent to the market. Spur 16 is expected to open in fall, and will also feature 10 townhouses and 145 apartments.

While Beans & Barley has existed in Milwaukee since 1973, it opened at its current location following a building fire in 1994. The restaurant, deli and store is currently owned by James Neumeyer and Polly Kaplan. Lawder spoke with Kaplan about the new location:

“Beans & Barley has always been about fresh food, made from scratch but it is really so much more,” Kaplan said. “It is a community of customers and employees who are invested in seeing ‘their place’ thrive. We have survived fires, corporate competition and sink holes all because we care about the food we serve and the friends we make. We are really looking forward to working with the other vendors in the Market Place.”

Fine-Dining chef Van Luu has started a new business that will host small, in-home dinner parties. Luu has previously worked at mushroom supplier Mushroom Mike, the restaurant Bacchus (925 E. Wells St.) and as head chef at the former Prodigal Gastropub (240 E. Pittsburgh Ave.). Luu will no longer be working in the dining industry, but will use Kinetic Kitchen as a “creative outlet” in the meantime. Kinetic Kitchens will operate Friday and Saturday nights, and will offer “modern-American food.”

Kinetic Kitchen will supply items such as plates and glassware, and prepare four, six or eight courses in the client’s kitchen for four to six people.

Prices per person would be $65 for four courses, $85 for six courses and $100 for eight courses. Wines or other beverages can be supplied by the customer or for an additional charge by the company.