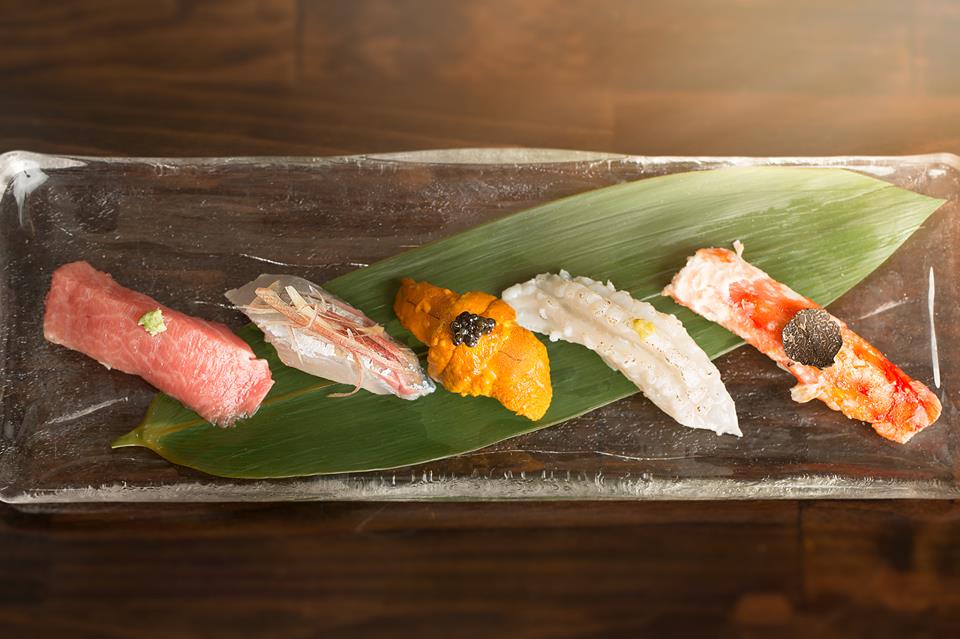 Two months after La Fuente (625 S. 5th St.) closed, Mike Eitel announced in January that he would helm a new pop-up in the space. Eitel is the owner of Nomad World Pub (1401 E. Brady St.). His new venture, promising a Latin twist on the original Brady St. bar, opened to the public on May 4. The opening was also marked with a release party for the ¡Nomad! Summer Ale, a new beer specially made by Good City for the new restaurant.

According to a press release, Eitel has plans to keep the pop-up open until November and has only signed a one-year lease. In the meantime, Nomad has plenty of plans throughout the summer, including a month-long World Cup celebration in June. The press release reads:

The new tavern is designed to be a totally immersive experience. It will feature Caravan’s signature global street food. There won’t be any draft beers on the menu – only cans and bottles…

This year patrons at Nomad Nacional can enjoy the fútbol tournament in the bar’s World Cup FanZone, complete with large TV screens in an outdoor viewing area, live entertainment, a marketplace and space for food trucks.

The New Year marked the end of an era for Izumi’s (2150 N. Prospect Ave.). After operating on the East Side for 33 years, the restaurant closed at the end of December when the space’s lease was taken over by the Kanpai restaurant, 408 E. Chicago St., co-owners. Kanpai 2 opened in the space.

The restaurant is open for both lunch and dinner, offering the same menu as the restaurant’s Third Ward location. That means plenty of sushi, along with appetizers like stuffed avocados, fried calamari and spicy edamame. There are also entrees like miso-glazed sea bass, and chicken, tofu or sweet potato teriyaki. There are also Korean specialties like bulgogi and bibimbop served in traditional hot stone bowls.

As the days get longer, a Milwaukee neighborhood will have an option to satisfy late-night dessert cravings. Insomnia Cookies (2221 S. Kinnickinnic Ave.) officially opened May 7 in Bay View, six months after Urban Milwaukee reported that the bakery chain would be adding a second location. For those unfamiliar with the company, Insomnia Cookies offers late-night delivery of various sweet treats, mainly cookies and ice cream.

The announcement was made via the Bay View Town Hall page on Facebook. According to the post, the location was open from 11 a.m. to 3 a.m.

While mixed narratives surfaced surrounding the closing of former Wolf Peach in March, there is no doubt the space will become the home of a new restaurant. View MKE is slated to open at 1818 N. Hubbard St. in Brewers Hill this summer. The eatery will feature “small plates, shareable platters and a local take on globally-inspired cuisine,” as well as two indoor floors and an outdoor patio. View MKE’s team includes owner Carl Tomich, Executive Chef Zach Panoske, general manager Andrew Ruggeri and two sous chefs: Jerry Feger Jr. and Paris Dreibelbis.

A press release posted by OnMilwaukee offers some details on the menu:

The restaurant will feature seasonal “farm-to-fork” menus with an emphasis on fresh, locally sourced products and ingredients, Ruggeri said. Menu development is in progress, with the culinary team adding a modern, interesting turn to techniques, flavors and spices from Italy, Spain, the Basque Region, the Philippines and other corners of the world. The indoor dining space will feature small plates with a menu that will change with the seasons, and appetizers and shareable platters for groups will be the focus for the separate patio menu.

Viewe MKE will be open daily, and will serve brunch on Saturday and Sunday.

Boone & Crockett’s former Bay View location has only been vacant for three weeks, but a new tavern is already in the works for the space at 2151 S. Kinnickinnic Ave. The Lost Whale is expected to open mid-June, and owners Tripper Duval and Daniel Beres will emphasize Midwestern hospitality. Duval previously worked at Badger Liquor, while Beres was the beverage director for Stand Eat Drink Hospitality Group.

The Milwaukee Business Journal‘s Melanie Lawder gives us a peak at what we can expect:

The new tavern will also host a rotating lineup of food trucks and plans to emphasize sustainability in their business through the use of biodegradable straws, cross-utilizing produce, composting waste and recycling, according to the release. Given its location on Kinnickinnic Avenue and its name, the tavern said it also plans to support community efforts and charities that respect and maintain Milwaukee’s waterways.

A new Middle-Eastern deli is headed to 3060-3062 S. 13th St. The restaurant’s proprietor, Riham Silan, plans to serve traditional Syrian dishes. Silan is a Syrian refugee, and formerly owned a restaurant with her family before fleeing Damascus. The building has been purchased by Mohammad Hani Sawah through Sleep Tight LLC.

“(Silan) wants to expand her love for cooking, by sharing her talents with a broader customer base and give back to the local community through great food and employment opportunities,” a city document states.

The eatery will serve up authentic Syrian dishes, coffees and desserts prepared from traditional recipes… No alcoholic beverages are expected to be sold at the deli and restaurant. 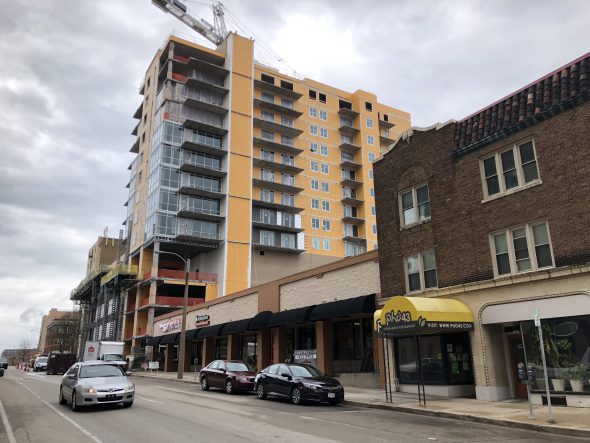 The Urbanite at 1840 N. Farwell Ave. Photo by Jeramey Jannene.

We reported on May 4 that the apartment tower being built at 1840 N. Farwell Ave. has been dubbed the Urbanite. The 13-story tower will have 153 apartments, and will now reportedly house two restaurants as well. The businesses will be owned by award-winning chef Justin Carlisle who also operates Red Light Ramen (1749 N. Farwell Ave.) and Ardent (1751 N. Farwell Ave.) across the street.

A grab-and-go deli counter will be known as The Duke, in homage to Carlisle’s father. A more casual sit-down portion will be known as Purleiu, meaning neighborhood. The restaurant-within-a-restaurant concept was used by Carlisle to launch Red Light Ramen with Ardent, before spinning the late-night ramen joint into its own space.

Owners Pam and Mike Buckley are merging three buildings while expanding Buckley’s Restaurant and Bar (801 N. Cass St.). The two share the business with their sons Britt and Taylor as well as chef Thi Cao, and hope to attract business through the new Northwestern Mutual buildings and the hotel replacing the Humphrey Scottish Rite Masonic center at 790 N. Van Buren St.

The Journal Sentinel’s Carol Deptolla spoke with Pam Buckley about the expansion:

The restaurant is growing from one building to encompass three connected buildings: its current corner building, dating to 1897; a brown brick building to the north dating to 1922; and a new connector building between the two, where the restaurant’s driveway had been…

Once the two northern buildings are opened in summer, the corner building will be shut down so work can begin there to expand the bar and install new flooring.

Work on the original building could take six to eight weeks; the goal is for the entire restaurant to be open by the holiday season, Buckley said.

Tre Rivali (200 N. Broadway), the Mediterranean restaurant located inside the Kimpton Journeyman Hotel, has updated their offerings in time for summer. A new Happy Hour will also be implemented from 2 p.m. to 6 p.m. Monday through Friday. The happy hour will be offered in the bar and on the patio. Deals include $1 off draft beers, $2 off specialty cocktails, half-off wood-fired pizza and $8 glasses of select house wines. In addition, a new lunch menu has been added at the direction of Executive Chef Heather Terhune. The fare will focus on light and fresh food made from locally-sourced ingredients. Some of the new items include Olive Oil Poached Tuna Nicoise, the Chilled Gulf Shrimp and Marinated Asparagus with Burrata salads.

Among the new menu items are a range of tartines which include:

Red Dot Tosa has confirmed that the restaurant will be closed for at least 75 to 90 days following a fire at May 7. According to the Journal Sentinel, the fire is believed to have started on the first floor. The restaurant was closed at the time, and no injuries were reported. The fire started sometime in the afternoon and was contained by 2:30 p.m. According to posts on Red Dot’s Facebook page, the damage is extensive but they hope to make a comeback as soon as possible.