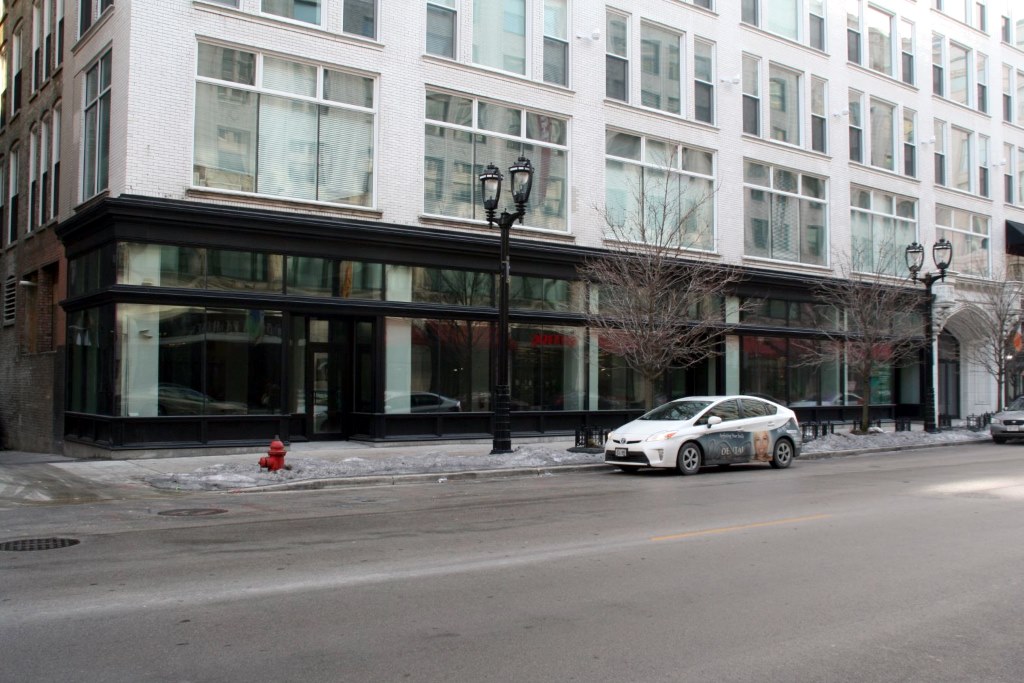 A mini-bowling bar could be coming to the Posner Building (MKE Lofts). Photo by Jeramey Jannene.

In November, Michael Feker announced that he would be embarking on a venture called 2Mesa with his wife, Maricela. Now, we have an opening date for the all-day Mexican restaurant. 2Mesa (4110 W. Martin Dr.) will open to the public on March 29th, with a soft-opening March 25th. The space is within walking distance of the Harley Davidson headquarters and the Miller Brewing plant and offices. Feker is no stranger to Milwaukee dining fans and well-known for his restaurant Il Mito (6913 W. North Ave.).

In the mornings the restaurant will have fresh juices, espresso drinks and cafe con leche and serve breakfast dishes through the lunch hour, Michael Feker said. It also will have pastries including conchas. Breakfast plates, such as chilaquiles, are $8.95.

The lunch menu will include tortas, tacos and plate lunches that can be served quickly; they’re aimed to appeal to nearby workers who might have 20 minutes or so to eat lunch, Feker said.

Prices at lunch range from $6.95 for a Caesar salad to $13.95 for three fish tacos with rice, beans and green salad or shrimp enchiladas with those side dishes.

Dinner entrees will include a fish of the day with roasted Veracruzana salsa ($16.95) and beef short ribs braised with chiles ($16.95).

A new option for lighter dining is coming to Downtown. The Canadian-based chain, Freshii, will open its first Milwaukee location in the Two Fifty MKE building (250 E. Wisconsin Ave.). The fast-casual restaurant is expected to open in July.

The new eatery will be open for breakfast, lunch and dinner, according to the news release. Menu items include salads, quinoa and rice bowls, burritos, wraps, soups, juices, smoothies and frozen yogurt, among other offerings.

Freshii has over 300 locations internationally, including WI locations in Madison and Appleton and emphasizes, fast, casual, nutritious food. “Since opening in 2005, Freshii has been on a mission to change the way the world eats,” the chain’s website declares. “By making superfoods like kale and quinoa convenient and affordable for every citizen of the world… Turmeric juices, energii bites and grain bowls only skim the surface.” Yes, Downtown is about to get much healthier.

A mini-bowling bar is in the works for the Posner Building, 152 W. Wisconsin Ave. Dan Zierath of the Zierath Restaurant Group says he is “in-talks” to open Thirsty Duck at the Westown location. Thirsty Duck has locations in Wauwatosa and Sussex, and the restaurant group also operates Jackson’s Blue Ribbon Pub in Wauwatosa.

Deptolla spoke with Zierath about the possibility:

“Downtown is going through a revitalization right now. I just want to be part of it,” he said. The location also would provide the group with needed extra space for private events, especially during the holidays, he said.

Andrew Ruiz has resigned from his position as executive chef at Harbor House. The resignation is effective immediately, and with no given reason. The Bartolotta Restaurants group said in a statement that corporate chef Adam Siegel will fill Ruiz’s role until a permanent replacement is found.

Ruiz had been with The Bartolotta Restaurants group since 2001 and had roles at Ristorante Bartolotta, Bacchus, Rumpus Room, and Joey Gerard’s in Greenfield, where he was executive chef. In July, Ruiz replaced Andrew Fisher as executive chef at the seafood restaurant at 550 N. Harbor Drive.

Love Shack (106 W. Seeboth St.) owners Wes Shaver and Mike Sorge have relinquished their ownership of the tiki bar and restaurant, and will be operating a new hospitality group and consulting agency. The hospitality group will be called Restaurant Revolution, and the consulting agency will be called Revolve. The two also operate Black Sheep (216 S. 2nd St.) and The Schwabenhof (N56 W14750 Silver Spring Dr.) in Menomonee Falls. Gary LaCourt will now be the sole owner of Love Shack, and will operate it under his group Forever Hospitality.

Lawder details the new ventures for Shaver and Sorge:

Restaurant Revolution is the parent company of Black Sheep and The Schwabenhof. It will also be the umbrella under which other concepts devised by Shaver and Sorge will operate…

Revolve is an “experience-driven agency” geared toward smaller, locally owned businesses with budgets that can’t bear the costs of a traditional agency, according to the news release. The agency provides concept creation, public relations, sales cultivation and brand management services, among other project management and consulting services.

The future of Northpoint Custard (2272 N. Lincoln Memorial Dr.) seemed bleak after Milwaukee County made a request for bids to run the stand for the next five years, requiring a minimum rent of $60,000 per year. However, it seems that Bartolotta will operate the stand for at least one year, despite a bid that did not fulfill the rent requirement.

Bartolotta announced that it “will continue its partnership with Milwaukee County in 2018” and that the stand will open on Saturday, May 19.

According to Bartolotta spokesperson Kelly Mallegni, the one-year partnership extends the previous agreement between the entities.

“All terms are the same as they were last year,” she told OnMilwaukee in an email.

As it does every year, Northpoint will offer free burgers to the first 200 customers in line. Northpoint also appeared on an episode of “Seaside Snacks & Shacks” on the Cooking Channel last year.

It might come as a surprise to some that not one, but two, seemingly successful restaurants closed. Supper (1962 N. Prospect Ave.) closed on March 12th, and its sister restaurant, Wolf Peach, closed on March 18th. Gina Gruenewald co-owns Supper with Erich Wilz and is listed as sole owner of Wolf Peach. That, however, is disputed, as mixed narratives surfaced regarding the demise of Wolf Peach. Gruenewald maintains that the new owner, Carl Tomich, “attempted to take over the farm-to-table restaurant.” But Tim Dixon, the building’s current owner and investor of Wolf Peach, refutes Gruenewald’s telling of the story.

Dixon says he cautioned Gruenewald against opening Supper, a modern supper club, in the Shorecrest Hotel at 1962 N. Prospect Ave. “The goose that laid the golden egg was Wolf Peach, she needed the cash [from Wolf Peach] to keep Supper open.” Dixon says. Over time, Gruenewald began paying rent late for the Wolf Peach space.

According to the article, an advertisement seeking a chef for a new restaurant in the Wolf Peach space has been posted on Craigslist. Tomich owns New Berlin’s Stonefire Pizza Co.

C. 1880 (1100 S. 1st St.) will end its six-year tenure on April 28th. Owner Thomas Hauck is closing the Walker’s Point restaurant following the failure of his other venture, Karl Ratzsch (320 E. Mason St.), which closed about a year ago. The German eatery originally opened in 1904, and came under Hauck’s ownership in 2016.

According to OnMilwaukee’s Lori Fredrich, Hauck had this to say:

“Sadly, with the unfortunate failure of the Karl Ratzsch venture, and the changes in the Milwaukee restaurant market, I am no longer in a confident financial position to renew the lease for the space we call home,” he says, “This is in no way a reflection on the landlord or others. They have been a joy to work with, day in and day out. In reality, I must put my wife and children first in this decision, no matter how hard it is personally.”