Who Will Serve the Greek Freak?

BelAir lost its chance Sunday, but Rare now offers a table. Plus: RC's closes after 40 years. 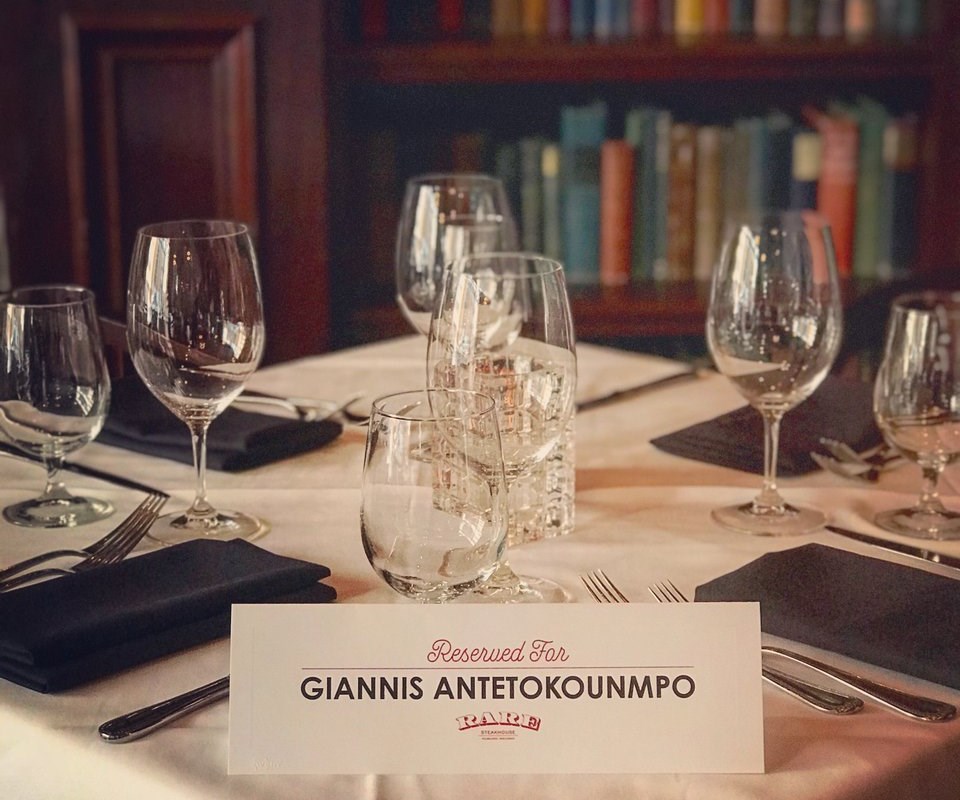 Following a close Game 4 win on Sunday, multiple news outlets reported that BelAir Cantina (1935 N. Water St.) failed to serve Giannis Antetokounmpo. Not exactly. The restaurant rebutted the claims by releasing a surveillance image showing the manager greeting Giannis. The statement also says she had told Giannis the wait time for service. Still, a wait time for the guy who had 27 points, seven rebounds and five assists that night? According to a tweets by @MoSokanhe, “customers were frantically trying to give up their seats to get Antetokounmpo a table, as you’d expect in Milwaukee,” as Yahoo.com reported.

But Giannis told WISN 12 “I did not find it a big deal… I decided to leave because my ankle was hurt at the time. I couldn’t stand there.” So he politely left and ate at nearby DiModa Pizza, with no hard feelings. “I’ve been in the restaurant a lot of times,” he said of BelAir. “They’re really good people. I know the owners. I’ll be there again,” he told WISN. “And yeah,” Giannis added. “They offered me a free meal, so I’m going to take that, too.”

So while the dust has seemingly settled on this non-controversy, two Milwaukee establishments have made it clear that Giannis will never have to wait — even a minute — if he visits. Rare Steakhouse (833 E. Michigan St.) and the taco truck Mazorca (209 S. 1st St.) have both posted pictures of the tables they’ve reserved for the Greek Freak. That’s great, but c’mom, isn’t there a Greek restaurant willing to set aside a table?

Earlier this month Stone Creek Coffee announced its new cafe at 2650 N. Downer Ave. would open on May 11, along with a new endeavor titled Project EAT. The opening date for both ventures has now been pushed two weeks to May 24.

OnMilwaukee’s Lori Fredrich has the scoop, along with additional details for both projects:

Project EAT is the name of Stone Creek’s new culinary offerings, which will focus on comfort food items that are elegant, accessible and transparent (EAT). The new menu is designed to complement Stone Creek’s established and ever-growing farm-to-cup coffee program…

The new cafe is expected to feature seating for around 50 inside, as well as an additional 50 on the patio, and a comfortable outdoor area, complete with a green space, which will resemble the space designed for Stone Creek’s Madison cafe.

As previously reported, the Project EAT menu will be served at Stone Creek’s Factory Cafe this summer, along with other cafes throughout 2018.

Night Club or Not?

A new, maybe-nightclub has opened near Bay View. El Relajo, at 733 W. Oklahoma Ave., a few blocks west of Bay View, opened on April 20. The owners are Elias and Jose Vidrio, who operate the business under El Relajo LLC. While paperwork filed with the city officially labels El Relajo as a tavern, their Facebook page lists the name as “El Relajo Night Club.” Even though area Ald. Tony Zielinski has stated that El Relajo is just a tavern, the bar was also issued a public entertainment license on April 3, 2018, by the city.

The bar will apparently not serve any type of food, listing 100% of its expected sales as coming from alcohol. El Relajo will also have on security guard on site, and lists their duties as “pat down/safety/crowd control.” The bar has room for 76 customers, and has listed types of entertainment as jukebox, pool tables, one arcade game and possible dancing among patrons. A video posted on El Relajo’s facebook page also shows a patron singing karaoke.

Some Bay View residents have been raising issues — and a little hell — about El Relajo. The bar has already been issued a citation for having a DJ without a license, and  Zielinski has stated that he is open to meeting with residents about their concerns.

Bartolotta Chef Zach Espinosa is switching gears and joining the team at White Lodging, which operates the Westin hotel at 550 N. Van Buren St. Espinosa ended his tenure as executive chef at Mr. B’s (18380 W. Capitol Dr.) on April 18, and will start his new position as executive chef at the Westin’s Stella Van Buren restaurant on Friday, April 27. Espinosa has worked at every Bartolotta restaurant except Joey Gerard’s and Ristorante Bartolotta.

In his role at the Westin, Espinosa will oversee a large culinary team not only for Stella Van Buren, which is open for breakfast, lunch and dinner, but for banquets and for room service. The kitchen is open every day, holidays included.

The Halal Guys location at 3133 N. Oakland Ave. on the East Side will be celebrating new proprietors this week — and they’re not all guys. Tammy and Paul Guadagno are the new owners along with Paul Guadagno’s father, Luigi.

They’re having a grand reopening this week to mark their purchase of the franchise, with specials Saturday on family-size orders. The Halal Guys will have family days on Saturdays through the summer…

With the new local owners, the store has broadened its fundraising programs for community groups and schools, Tammy Guadagno said.

The Oakland Ave. location, the first in Wisconsin for The Halal Guys, opened in April 2016 with Ravit Ansal and Dustin LeFebre as the franchisees. The Guadagnos bought the store in December and began operating it full time in February, Tammy Guadagno said. Guadagno said she has 30 years experience in restaurants, including operating a Chick-Fil-A  restaurant.

The legendary East Side bar has been open intermittently in recent months, causing speculation about whether or it might close. Unfortunately for loyal patrons, it is indeed closing time for RC’s (1528 E. North Ave.), which was first opened by Robert “RC” Schmidt more than 40 years ago. Schmidt has confirmed the bar is shutting its doors for good, with a final celebration planned for April 28. The decision to close was discussed among Schmidt, his sons Matt and Andy, as well as another family member, Mike Foy. The family will turn its attention to their other businesses, such as Water Street Brewery and Trinity Three Irish Pubs.

“The idea is focusing on concepts that we think can really grow,” Matt Schmidt says. “That’s what we want to put our time and energy into right now.”It’s got to be a tough thing for RC to see his namesake, his first bar, finally shuttered for good.

“I think he’s got mixed emotions,” his son says. “I think there’s times when he’s kind of sad about it, but also, at the same time, this is business, and, unfortunately, you can’t run a business on nostalgia. It’s got to make dollars and cents. In a perfect world if we could we’d keep it, but it’s just time to move on…

“We envision this party as like an Irish wake,” Matt Schmidt adds, “where it’s happy and people are celebrating the end of an era.”

7 thoughts on “Now Serving: Who Will Serve the Greek Freak?”