Plus: Stone Creek on Downer, vegan restaurant on Farwell, Blue's Egg in Shorewood. 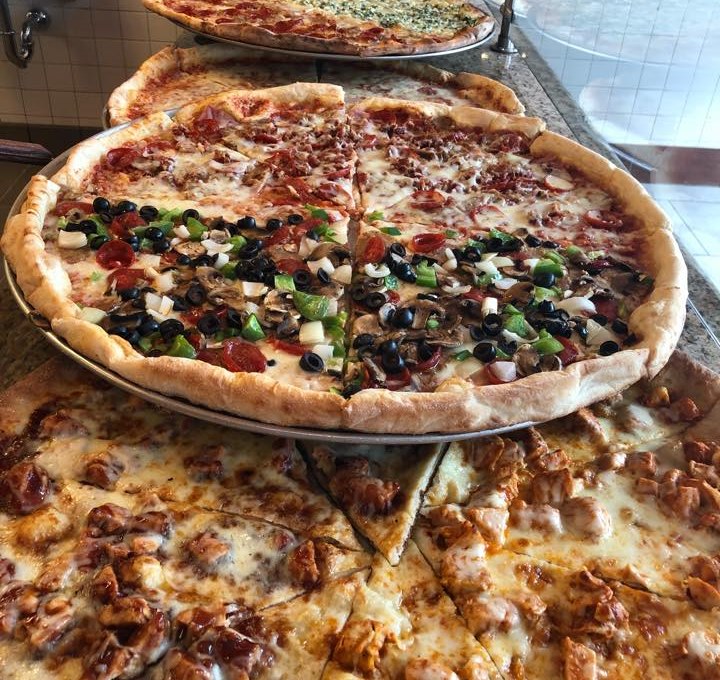 News broke in Feb. that a new pizza joint would take the place of the former Jimmy John’s space at 2242 S. Kinnickinnic Ave. It appears that Pizza Di Famiglia has arrived sooner than expected, and enjoyed a low-key opening this past weekend. Owner Besart Bajrami is a Brooklyn, New York native, and grew up working in the restaurant industry with his father and brothers. Bajrami has been working in Wisconsin for almost 20 years when he began assisting his brother in running a restaurant in Madison.

Pizza Di Famiglia features more than 10 types of pizza, all of which are made in house with handmade ingredients and Wisconsin cheeses. The dough and sauces are handmade, says Besart, and the sausage is custom-prepared by a local purveyor to his specifications.

The menu includes the “house pizza,” Grandma’s, a recipe named for Bajrsmi’s grandmother.

“It has seven cheeses, fresh garlic, basil and marinara,” says Bajrami, “It’s based on a pizza that my grandmother would make for us when we were kids.”

Other options include standards like cheese, pepperoni and sausage, along with more specialty pizzas such as a white pizza with spinach, chicken bacon ranch pizza, macaroni & cheese and buffalo or barbecue chicken. Slices are available for $3-3.95 each and whole pies are available in both 14-inch and 18-inch for $11.99 to around $24, depending on toppings.

Pizza Di Famiglia also serves salads, calzones, stromboli, cannoli, cheesecake and tiramisu. The restaurant has counter service and booth seating, as well as delivery and carryout options via EatStreet. Hours of operation are 11 a.m. to 11 p.m. Sunday through Wednesday, and 11 a.m. to 3 a.m. Thursday through Saturday.

It’s been a long time coming for this sushi restaurant. Fish Cheeks (6818 W. North Ave.) is finally open in Wauwatosa, after originally being proposed in 2013. Owner John Steiner says that the opening was postponed nearly six years due such setbacks as “a change in design, securing funding and difficulty in lining up contractors all contributed to the delay.” Steiner and his wife, Lori, formerly owned the Hotaru sushi restaurant on Okauchee Lake from 2004-2007.

The Journal Sentinel’s Carol Deptolla elaborates on the menu:

Fish Cheeks serves some fish and grilled-meat entrees ($18 to $26), including black cod with miso and edamame mashed potatoes, and hibachi meats prepared in the kitchen. It also has nigiri and sashimi omakase dinners ($25 to $35).

The majority of the menu, though, is sushi rolls. Simple maki rolls, like cucumber or spicy scallop, range from $4 to $9.

More elaborate maki rolls, like the Wicked Tuna (tempura shrimp, spicy tuna, asparagus and avocado with mango-jalapeño mayonnaise) are mostly $10 to $16. A 10-piece lobster roll is $18.

The menu also holds about a dozen appetizers ($5 to $14), including blistered shishito peppers, fried squid and dumplings, as well as soups and salads, from tamarind soup with daikon, tomato and kale ($4) to smoked salmon salad with spinach, a poached egg and togarashi hollandaise ($12).

Because of the opening’s delay, a full liquor license granted to the restaurant two years ago has since been revoked. Steiner plans to apply for a new beer and wine license soon, and will also eventually apply for a liquor license. Fish Cheeks opens at 4 p.m. Monday through Friday, and 11 a.m. Saturday and Sunday. Closing hours have not been finalized, but may go until 9 or 10 p.m. weekends.

May 11th will bring not one, but two new additions to the Stone Creek Coffee family. A new cafe will be opening and a venture called Project EAT will both be launching from 2650 N. Downer Ave. The new cafe will also have a kitchen, and will have plenty of indoor seating, as well as an indoor/outdoor patio.

According to a press release, Project EAT will be an attempt to provide food that follows the Farm to Cup mantra of Stone Creek’s coffee. The release reads:

As we continue to build a coffee program that welcomes every kind of #coffeegeek, we want our food program to mirror that spirit. Starting with our new cafe on Downer Ave, the Project EAT menu will include comfort food that is Elegant, Accessible, and Transparent: EAT.

The same menu will be offered at Stone Creek’s Factory Cafe in the summer, and may also be tied into dining options at other locations throughout the rest of the year.

Beatrix Foods owner Melanie Manuel first announced in January she would be opening a vegan restaurant at the former Jow Nai Fouquet. In February, the restaurant was given the name of Celesta. The restaurant has now applied for a Food-Dealer Restaurant license as well as a Class B Tavern license. According to the application, Celesta is expecting to be open until 10 p.m. weekdays and midnight on weekends. Alderman Nik Kovac will be hosting a meeting on Thursday, April 12 at 6 p.m. to discuss the business’s plans and any concerns from the community. The meeting will be held at the restaurant’s location at 1978 N. Farwell Ave.

Owners of the new Blue’s Egg location in Shorewood are expecting to open next month. The second location of the popular Wauwatosa restaurant will be located at 4195 N. Oakland Ave., in the first-level storefront of the Mosaic apartment building. Blue’s Egg will be part of Black Shoe Hospitality, and will be owned by members of the restaurant group, including Dan Sidner, chef Joe Muench, Amy Kerstein and and Jason Kerstein.

Co-owner Dan Sidner said in a statement that they have secured a lease, as well as certain regulatory approvals for the new business, and are working with the village of Shorewood to obtain the necessary licensing.

Construction to build out the restaurant space is currently underway. An exact opening date has not yet been earmarked.

“We do not have a firm date, but the current plan is to open in late May, after Mother’s Day and before Memorial Day weekend,” Sidner said.

Following the closure of Hello Falafel (2301 S. Howell Ave.) in Jan., owners Melissa Buchholz and Ross Bachhuber announced that the space would be turned into Little Duck Kitchen and would serve as “a catering and private event space for their other restaurant, Odd Duck.” Little Duck will make its debut with the Spring Forager’s and Farmer’s dinners on both May 19 and 20. A reception will start at 6 p.m. and dinner will start at 6:30 p.m.

The inaugural event will “showcase the harbingers of spring here in Wisconsin with a collaborative multi-course tasting menu from Executive Chef Ross Bachhuber and Guest Chef Cole Ersel.”

…”Each course will focus on a first-of-the-season farmed or foraged ingredient from our lovely state in an exploration of a lovely season in this place we call home. Expect items such as fiddlehead ferns, morel & pheasant back mushrooms, spring onions, watercress, ramps, spring peas, spruce tips, rhubarb and more!”

The event cost is $100, which includes wine pairings but does not include tax and gratuity. Reservations are extremely limited, and can be made by calling 414-763-5881.

Boone & Crockett’s eventual change of scenery was first announced in January, and now it’s time for the business bid farewell to its current Bay View location at 2151 S. Kinnickinnic Ave. The bar’s last night will be April 16, and is expected to reopen at its new 818 S. Water St. location by May.

The new Boone will have a roundabout bar to accommodate about 25 guests, four six-person booths with a familiar plaid pattern, similar decor of taxidermy and phonograph horn lamps, the same chandeliers, and walls painted to look identical to the Bay View location. One corner of the lounge even has a small stage that resembles Boone’s current performance space, which will host solo acts and small bands on occasion.

There will be pub tables and bench seating when it opens, and the bar will begin with its existing cocktail menu. Eventually, there will be eight draft lines. Revord says there are plans to install double doors that will lead out to a 30-foot by 60-foot patio that’s to be nestled beside the 97-stall parking lot and will look out on the Hoan Bridge. Revord anticipates the four seasons patio will be ready by June. Taco Moto will be stationed there immediately and will begin serving lunch once the relocation is complete.