Plus: Mr. B's Steakhouse is soon to reopen, but it's closing time for the Silver Spring House. 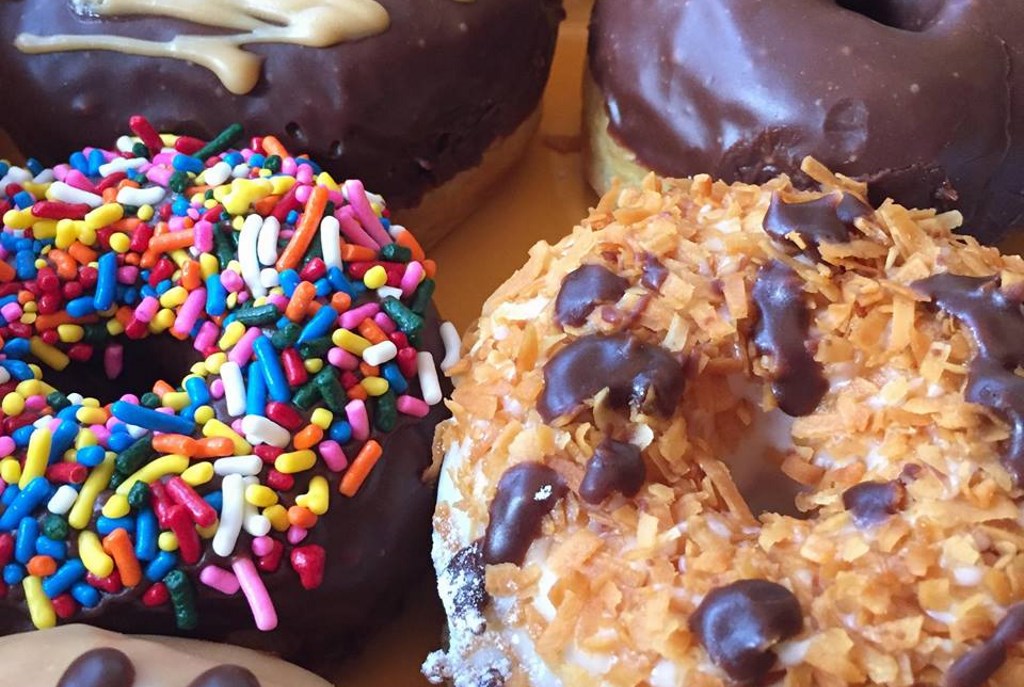 Jimmy Carlton of OnMilwaukee reports on the announcement:

The Rings, who met while working together at a local bakery – Bobby as a baker, Amanda on the retail side – opened their donut shop last September. According to the Sweet Rings website, for the husband and wife, “opening our own family donut shop is a dream come true and we can’t wait to serve you our delicious treats in a funky and family-friendly environment.”

Celesta Coming to East Side

News of a new east side vegan restaurant surfaced last month. Beatrix Foods chef and owner Melanie Manuel now has a name and other details about her second venture in Milwaukee. The new restaurant, which will be found at 1978 E. Farwell Ave., has been dubbed Celesta: Extraordinary Vegan Eats. Similar to Beatrix Foods, Celesta’s menu will focus on vegan, internationally-inspired foods.

OnMilwaukee’s Lori Fredrich provides a first look at the fare:

“There will be a rotating ‘global bites’ dish,” says Manuel, “… finger foods like dumplings or pierogi. And we’ll make our own pickles and chutneys.”

There will be comfort food items like a vegan turkey club made with seitan, ramen made with a miso mushroom base and a Southern platter featuring vegan fried chicken and macaroni and cheese made without dairy.

Celesta will also cater for those looking for grab-and-go items, including bakery (like these vegan croissants) and sandwiches…

A butchery case will be stocked with three or four plant-based proteins including selections like turkey slices made from seitan, seitan and chickpea cutlets and tempeh bacon, all of which will be available for purchase.

The eatery will have a daily happy hour and weekend brunch, as well as late-night bar food Fridays and Saturdays. Vegan hot ham and rolls will also be served Sundays during Packers season. Lunch and dinner will be served Tuesday through Saturday, with a bar menu available in between.

Mitch Ciohon announced in January that he would be changing the name of his taco and burger food trucks, following criticism from members of the Romani community. Now, with the help of his business partner John Revord, Ciohon has settled on the names Taco Moto and Burger Moto.

Fredrich writes about Ciohon’s thoughts on the process:

“This experience has been really eye-opening,” he says. “I’ve come to understand so much more about the Roma community and what they’ve been through over the years. And I’ve learned that almost anyone that they’ve approached in the past about a name change or an offensive slogan has pretty much been unresponsive. And so it was really important to me to follow through and keep my word.”

Ciohon says that, despite the difficulty of the transition, he feels good about the changes and he hopes customers will feel the same.

“There will always be people who are too closed minded to understand why I needed to do this,” he says. “But the hope is really that most people will really get behind it and support what I’ve been doing for the past five years.”

Ciohon also posted a video on Facebook to mark the announcement.

Mimma’s was credited for transforming the Brady Street dining scene, and for being a staple in Milwaukee Italian dining for 30 years. While the restaurant has been closed since Jan. 2017, diners pining for the cooking of former owner Girolama “Mimma” Megna are in luck. Megna will be hosting a pop-up at Supper (1962 N. Prospect Ave.) on February 25, as well as a number of cooking classes throughout March and April. Megna will be leading the pop-up herself, with the assistance of Erik Hansen.

Ann Christenson of Milwaukee Magazine has provided the list of classes and the details in her article, as well as the menu for the event in February:

The six-course event at Supper features classic dishes prepared by Megna – grilled calamari, caprese salad with prosciutto and crostini, farfelle taormina, spiedini (of beef and pork, with red sauce and oven-roasted potatoes), red snapper with cherry tomato-wine sauce and green beans, and tiramisu. Cost: $75 per person (plus $40 for wine pairings). Call 414-509-6074 to make a reservation.

At the public market, you can sign up for the classes individually (each is $89). Megna is teaching four of them:

The owner of Uppa Yard (4925 W. Fond Du Lac Ave.) is looking to expand the Jamaican restaurant. Oliver Edwards hopes to move the establishment to 4943-47 W. Fond Du Lac Ave. Most of the restaurant’s current business is takeout, but the new space would allow the addition of a larger dining area and a lounge.

In addition to more dining, Edwards has more plans for his restaurant. The Journal Sentinel’s Carol Deptolla offers this take:

The building also would supply space for Concoctions, a frozen-drink business that would operate the lounge. The business, which began in 2009 and sells its drink at festivals, makes both alcoholic and nonalcoholic drinks.

The expansion would mean Concoctions would grow from a one-person operation to five. Uppa Yard’s owner plans to have 15 employees at the larger restaurant, up from 11.

A fire at Mr. B’s Steakhouse in Brookfield on Feb. 12 caused the restaurant’s temporary closing. But good news, Mr. B’s could be open again as soon as Friday, Feb. 23. The suspected chimney fire was contained by a sprinkler-system, but still caused an estimated $100,000 in damage.

According to Deptolla, The Bartolotta Restaurants Manager Manager Kelly Mallegni had this to say:

“We can’t promise since we are evaluating the progress every single day,” Mallegni said.

Mallegni said the fire damage itself was very contained and small but they are trying to wade through the damage.

“The damage is pretty small, but we want to make sure everything is up and running and perfect before we reopen,” she said.

“It appears a section of wood truss that supports the roof structure was subjected to continued heating from the wood oven flue over a period of time. It is unclear if this incident was caused by a design, manufacture or installation issue. The cause is not suspicious,” said David Mason, assistant chief of the City of Brookfield Fire Department.

The “historic tavern” known as Silver Spring House (6655 N. Green Bay Ave.) has closed. The closure of the restaurant, which included multiple connected buildings, was announced via a sign on the door.

Deptolla details some of the eatery’s background:

Charles Krocker called his tavern Krocker House in the mid-19th century on the site; in 1856, brewer Valentine Blatz bought it, continuing to call it Krocker House, according to Journal Sentinel files. A history of Glendale published for the city’s 50th anniversary says Silver Spring House was built in 1904 and expanded several times.

Spring House served pub fare, along with fish fries on Friday and prime rib on Wednesdays and Saturdays.