Plus: Siver City Pho-fest. And an ax-throwing bar? 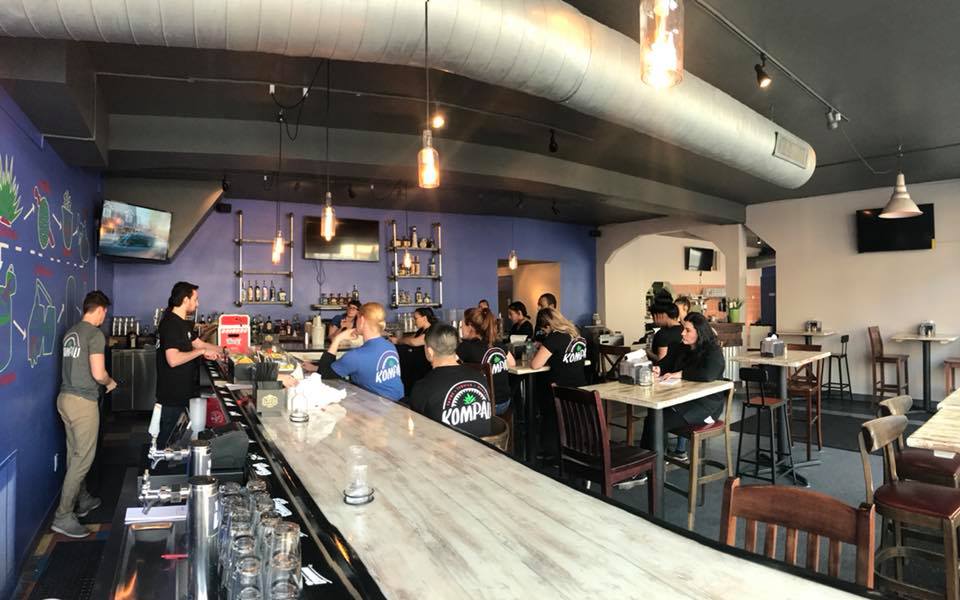 A year after the closure of Cempazuchi, the space now has officially re-opened as a new restaurant. Kompali (1205 E. Brady St.) opened on Monday, bringing a “modern taqueria” to the neighborhood. Owners Karlos Soriano and Paco Villar also operate C-Viche (2165 S. Kinnickinnic Ave) in Bay View, which specializes in family recipes.

There are tortas, including the Milanesa featuring breaded chicken or beef served on a traditional bolillo roll with panela cheese, tomatoes, onions, mayo and jalapenos ($7.50); the jamon with ham, Oaxaca cheese, onions, tomato and avocado ($6.50) and carnitas featuring braised pork, pickled red onions and jalapenos ($8.50).

Silver City will turn into a pho city during the month of February. “Phobruary,” the annual celebration of the Vietnamese noodle soup dish, will return for its fifth year this February. Phobruary will be held on W. National Ave between Miller Park and the Mitchell Park Domes. Bowls of pho will be available Monday through Friday for $5 each (dine-in only). The participating restaurants are Bamboo (3427 W. National Ave.), Thai Bar-B-Que (3417 W. National Ave.) and Vientiane Noodle Shop (3422 W. National Ave.).

Diners who eat at all three Phobruary restaurants in February will receive a signed certificate of achievement and be entered to win a $25 gift certificate to Asian International Market, 3401 W. National Ave. To enter, diners must submit receipts and photos of themselves with each bowl of pho to celia@lbwn.org.

And the first 10 people to eat at all three Phobruary spots in one day will receive a $25 gift certificate to Asian International Market and a signed certificate of excellence; send receipts and photos to celia@lbwn.org.

The food will remain the same, but Mitch Ciohon, owner of Gypsy Taco and Gypsy Burger, has announced that he will be changing the names of his two businesses so that they no longer use the word “gypsy.” The word was originally a derogatory term for the Romani people (also known as Roma), an ethnic group which has significant populations in Europe and the Americas. While the name has been criticized since the businesses started, Ciohon maintains that he did not know the word was offensive

Dear friends and customers. I would like to announce that I will be working to rebrand my company effective immediately. It has come to my attention that the name around which I have created a brand is offensive to the people from which it stems. While not my intent, the name I chose to represent me as a chef was founded upon an inaccurate definition that disregarded the long history and plight of the Romani people. The local community has spoken and I have made it my mission to listen. I apologize to those I have offended. It was not my intent…I ask only that all affected respect the time and capital necessary in the rebranding of a business. The process cannot be done overnight, but rest easy knowing it begins now with this.

Ciohon also noted that while he didn’t understand the offensive nature of the word at first, he now does after doing significant research. The Romani people have been persecuted throughout history, and were targeted by Nazis during the Holocaust.

An individual identified as “Nina” of the Roma community provided her thoughts on Facebook on the change:

“I and other members of Milwaukee’s Roma community have been deeply troubled by the use of this racial slur in local business names, especially when we see a ‘Hate Has No Home Here’ sign in the window,” she says. “We are pleased to finally be included in the the anti-racist stance of these business owners, and see this change as an opportunity to further educate Milwaukee about Romani issues.”

Paul Bocuse, the “French culinary giant,” passed away on Jan. 20 at the age of 91. Buckley’s Restaurant (801 N. Cass St.) will honor the chef by serving dishes inspired by Bocuse’s recipes on Friday and Saturday.

According to Deptolla, chef Thi Cao will prepare the following:

Sharp objects and alcohol sound like a good combination…don’t they? Well, Marla and David Poytinger, owners of Splash Studio and Nine Below, think so. The two plan to open AXE MKE, an ax throwing bar, at 1924 E. Kenilworth Pl.

AXE MKE will feature several throwing cages – or “pits” – as well as a full bar and private event space in the 4,000-plus-square foot space, located between Yokohama and Ma Fischer’s.

“Think of a cross between bowling and darts,” explained Marla Poytinger in a press release. “You can rent a lane or two, grab drinks from the bar and kick back for some friendly ‘lumberjack-style’ competition. It’s insanely fun.”