Urban Milwaukee Has a “Spirited Debate”

Which is one of the beers made by Gathering Place Brewing, host for our latest beer bash.

Nothing says “Milwaukee” like getting together in the Riverwest neighborhood to sample some tasty brews.

Member Ed Werstein retired from workforce development. He stumbled across Urban Milwaukee when he was assigned to work on transportation issues in Milwaukee that were preventing people from getting to work and he was on a committee with Urban Milwaukee President and Co-Founder Jeramey Jannene. He loves Urban Milwaukee’s variety, its Friday columns, its coverage of the history of bars, and its reporting on local issues.

“This city is a beautiful city and I love it and I want to be a bigger part of it,” Fitzgibbons said.

Members were not only treated to a free beer but a tour of the 4,300-square-foot brewery with Founder and President Joe Yeado. Yeado started the whole business 10 years ago on his stove top, and after winning many awards including one at a Samuel Adams home brewing competition, he decided to commit to creating a brewery. Now his brews are featured in about 20 different locations around Milwaukee. There’s still a lot of work left to do on the brewery for both its products and renovations; Yeado would love to brew gluten free beers one day and perhaps find a way to showcase his awards: he currently keeps them all in a paper bag.

Yeado was inspired to have the brewery become a place for people to meet up after touring the beer gardens of Germany. He named it “Gathering Place” because Milwaukee in Potawatomi means just that. He moved out of Washington D.C. to Milwaukee because the beer laws are a bit more lenient here and chose the Riverwest neighborhood specifically because he felt it has a really strong sense of community and identity. He takes a little bit from the community for his brewery; the brewery’s design comes from the brewery’s neighbor Flux Design, his upcoming coffee stout uses coffee from Kickapoo Coffee, and his bar tops are made from the floor of an old basketball court at a high school (he doesn’t know which one). However he also makes it a point to give back to the community as well with one percent of sales every quarter going to a local nonprofit.

Before Urban Milwaukee featured Yeado’s brewery, it published a release on his education research with Public Policy Forum, where he worked as a Forum Senior Researcher. He appreciates Urban Milwaukee’s unique perspective on stories on urban development and politics, and how they cover things that other publications don’t.

If you would like to become a member and enjoy events such as this one, you can sign up here. 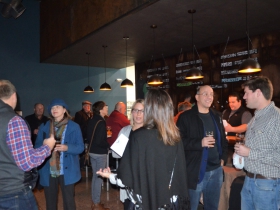 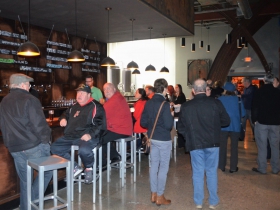 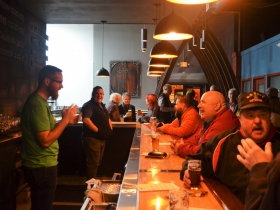 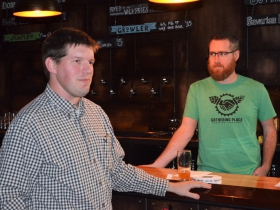 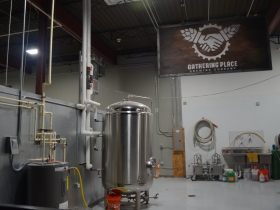 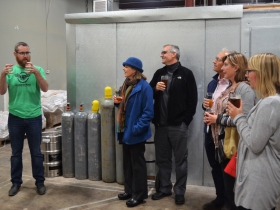 One thought on “Photo Gallery: Urban Milwaukee Has a “Spirited Debate””