Barrett Versus the Backdrop Boys

Or how police-fire benefits are driving the city budget crisis. 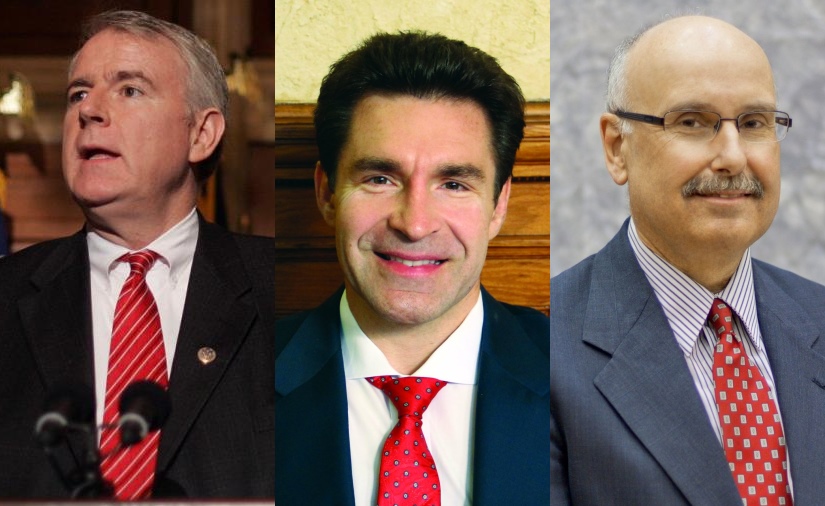 Oh, these are fun times at the city.

First we had aldermen Tony Zielinski and Mark Borkowski attacking Mayor Tom Barrett for cutting police positions in this budget, and calling him “Rip Van Barrett” and then (natch) we got Barrett’s chief of staff and resident tough guy Patrick Curley responding with equal ridicule, labeling the two men as the “Backdrop Boys” for supporting the county’s infamous pension plan back when they were supervisors. Borkowski, in his usual stream-of-consciousness style, didn’t quite explain the “Rip Van Winkle” comment, but you can’t say he’s not colorful. As for Backdrop Boys, what does that have to do with the price of rice at Sendiks?

So let’s catch our breath, take a step back and consider the the city’s budget dilemma and how we arrived at this bizarre war of words.

No doubt you recall Gov. Scott Walker’s signature law, Act 10. Whatever you might think of the policy and its impact on Wisconsin, it at least made some fiscal sense for school districts. Walker’s approach, in a nutshell, has been to to clamp constraints on local property taxes (they can’t raise the levy by more than the value of new construction), while giving local governments “the tools” to reduce expenses, namely Act 10‘s crushing of public worker rights and slashing of their benefits.

Pretty much every employee of school districts saw their benefits cut and most have lost their collective bargaining rights. But cities were an entirely different story because Walker exempted his political allies, the fire fighters and police, from Act 10. Suddenly all his justifications for the law didn’t apply. That squeezed every city, which had to live with constraints on property tax increases but was still left with rising wages and benefits for police and fire, who continued to use collective bargaining to drive hard bargains.

And no city was more squeezed than Milwaukee, because it is the state’s biggest city, with the most poverty and crime, and the most need for police. And that is part of the back story to the city’s current dilemma, with the Public Policy Forum declaring the Milwaukee’s revenue structure “is broken”, and Barrett proposing a draconian 2018 budget that cuts the number of fire fighters (by 75) and police (by 33).  A “primary culprit” for these budget cuts, the PPF concluded in its latest report, “is a spike in the employer pension contribution, which increases from $61 million to $83 million.”

This is despite the fact the number of police and fire fighters declined slightly, by four percent, during these six years. Meanwhile the number of other city employees actually grew — by less than one percent. Yet the cost of police and fire benefits ballooned by 50 percent during this period, from $86.8 million to $130.2 million, while the cost of benefits for all other city employees rose by just 3.9 percent, rising from $53.3 million to just $55.4 million.

I have written previously about the decline in state shared revenue, a trend that predates Gov. Walker but which has gotten ever worse under him: As the PPF concluded, if Milwaukee’s state aid had increased at the rate of inflation from 1995 to 2015, it would now be 58 percent or $151 million higher in real dollars. If this decline hadn’t happened we wouldn’t be talking now about a city budget problem or cuts to the police force.

But you can make the same statement about Act 10. If Walker hadn’t exempted police and fire fighters from the reduction in benefits and union power, the cost of employee benefits for the city would probably be at least $30 million less per year for Milwaukee today. Without that exemption for cops and fire fighters, we wouldn’t be talking about a city budget problem.

Walker, of course, added insult to injury by signing the law ending the city residency requirement, which has allowed police and fire fighters to escape those city property taxes which are driven by their own wages and benefits. As of July the city estimated that 30 percent of fire fighters and 27 percent of police had moved outside the city.

Traditionally, no area in the city had more police and fire fighters than the 11th district represented by Borkowski, so you can make a case for his zealous objection to any cuts for them. But of course those numbers are now declining, as they leave for the suburbs. And, it’s worth noting, Ald. Terry Witkowski’s 13th District also has many police and fire fighters, and you don’t see him savaging Barrett and his budget.

Borkowski, however, also contends that crime is up in his district, which is where “Rip Van Barrett” comes from: Borkowski presumably means (though he never said it) the mayor is sleeping through an alleged crime rise.

As for Zielinski, his ever zig-zagging political views have never made much sense. He was originally a streetcar supporter, but has in more recent years become an opponent. A source close to Zielinski tells me the alderman definitely plans to run for mayor in 2020, which might explain his sudden activism. The same source marveled at this ambition, saying Zielinski has “no chance” of winning a city-wide campaign, given the bizarre stands he has taken in the past.

Curley’s slap at the “Backdrop Boys” begins to make sense when you look at the city’s pension problem and its impact on the budget. Few politicians in Wisconsin history have less credentials to address this issue than Zielinski and Borkowski, who voted for the county pension plan of 2000 and 2001, and its backdrop benefit, which created the richest public pension in state history and has cost county taxpayers hundreds of millions of dollars and whose price tag is still rising.

Seven county supervisors who voted for this disastrous legislation were recalled from office but not Borkowski and Zielinski. Neither offered much of an explanation for their vote, as I’ve previously reported, and both voted twice for the lavish pension sweeteners: once for non-represented employees and again for union employees.

Borkowski pleaded ignorance to the law’s impact and never explained why he didn’t simply read the law it was his job to review. Today he is collecting an annual county pension of $26,243, in addition to his annual salary as an alderman of $73,222.

Zielinski was well-known as a part-time worker by his fellow county supervisors, as he spent much of his time getting a law degree from Marquette University Law School, so maybe he was just too busy studying for classes to actually read the law he signed. I have estimated, based on his years of service, that his annual county pension would be in the neighborhood of $16,000. But the county Retirement Plan Services office tells me Zielinski has a “deferred vested status in the ERS pension system and is not currently receiving a benefit.” I’m guessing that means that $16,000 is earning a sweet compounded interest rate and am awaiting an answer on this from the county — or from Zielinski.

The alderman may not need his county pension just yet, given the $73,222 salary he collects. By the end of his current term (he’s served on the Common Council since 2004), his annual city pension should be in the neighborhood of $29,000. As budget hawks or guardians of the taxpayers’ hard earned cash, neither alderman has much of a record to stand on.

7 thoughts on “Murphy’s Law: Barrett Versus the Backdrop Boys”