And Ald. Borkowski joins in, bashing the budget of "Rip Van Barrett." 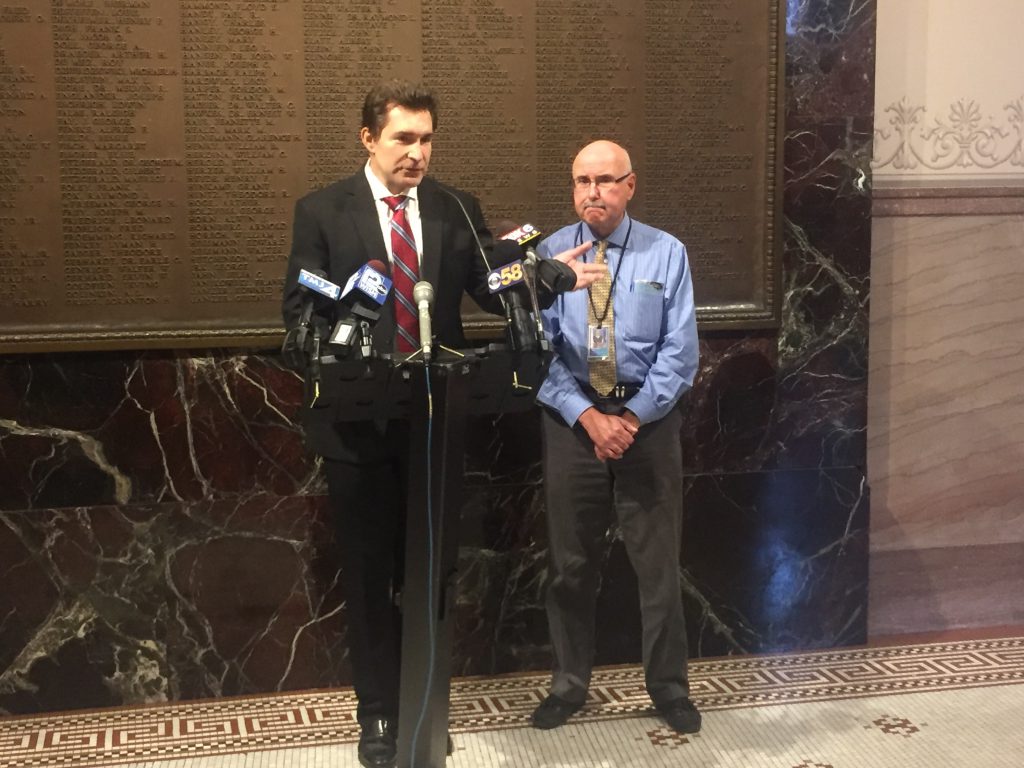 It’s all about priorities for Tony Zielinski and Mark Borkowski. And right now those priorities are attacking the streetcar and firing police chief Edward A. Flynn.

The two aldermen held a mid-day press conference in the City Hall rotunda following Mayor Tom Barrett‘s veto of a request for state legislation that would allow the council to fire the police chief. The legislation, which would require a change in state law, would allow the Common Council to remove the fire or police chief with a two-third’s majority vote. The council passed the legislation on a 8-to-6 vote on Tuesday, and Barrett, as promised, vetoed it by the end of the day.

Zielinski opened the press conference by noting “this is not about the chief, it’s about leadership to protect citizens.” He then went on to criticize the chief for standing with Barrett though his budget cuts the number of police and fire fighters. “We have a police chief who is charged with protecting people in this community, and we have a mayor who is cutting protective services, and the chief doesn’t say one word? That shows that we need checks and balances.”

The Bay View alderman recounted his story about emailing Flynn about the COP House Initiative and Flynn telling Zielinski face-to-face that he wasn’t going to respond. Barrett’s response to that in a Tuesday session with the media was this: “A relationship is a two-way street, you have to work at it, you can’t just expect someone to do everything you want them to do. And whether it’s the chief himself or his command staff, or the captains in the stations, I think there is a lot of interaction between the police hierarchy and the aldermen, and I think there should be.”

Borkowski took the mic after Zielinski’s opening remarks and noted “the objective has been accomplished. We have their attention. Rip Van Barrett and Chief Flynn now basically know that the crime level in this community is not acceptable, hello! For anyone to say that it’s okay or it’s the new norm, this is not what the Common Council is about. And so we are going to do whatever measures we have to, regardless of whether it’s not not good or it’s dumb or whatever, the bottom line is that we have their attention finally.”

Responding to a question after their remarks, Zielinski admitted he doesn’t have the ten votes yet to overturn the veto, stating “we’re working on that.” Adding Ald. Bob Donovan, who was excused from Tuesday’s vote, would give the council nine votes, but it’s also possible some council members will vote against overturning the veto. Might something else be in the works? “If we move forward with a vote of no confidence [in Chief Flynn] I don’t think there would be any trouble getting sufficient numbers to get that approved” said Zielinski.

Zielinski repeatedly stated that Barrett’s proposed budget doesn’t show public safety as a priority. Yet when pushed for how he would overcome a structural deficit that will result in the elimination of 75 firefighter and 33 police officer positions, Zielinski didn’t have many details to offer. He stated “Right now I think I should have enough amendments to restore all the police positions and I’m working on amendments on the fire department.” He went on to note “In the mayor’s budget he said that the streetcar isn’t impacting the budget, and yet we found positions in his budget that were directly impacting the budget.” Zielinski later acknowledged that the $10 million streetcar sponsorship by Potawatomi Hotel & Casino would cover the cost of those positions, but doubled down on the assertion that the streetcar was taking police officers off the street, saying “I’m sure there are plenty of other areas that there is money being siphoned off.”

The alderman declined to identify what he will cut in his amendments to fund the police positions. He released a press release earlier this week announcing legislation that would allow people to donate directly to the police department.

Zielinski noted that frequent Barrett critic Bob Donovan would have been in attendance at the press conference, but was away tending to his ailing father. Donovan also missed Tuesday’s meeting of the Common Council.

For more background on the legislation to fire the chiefs, see my Tuesday article “Council Votes for Authority to Fire Flynn.”

Borkowski and Zielinski have attempted to establish a position as budget hawks in response to the mayor’s latest budget, but both have a checkered history. Both were previously Milwaukee County Supervisors that voted for the infamous pension backdrops that have cost the county hundreds of millions of dollars. In addition, Zielinski continues to push for a new, city-owned park in his district with no public plan on how to fund it long-term.

Their record as being supporters of law and order is more consistent. Borkowski attacked the $5 million, 74-plaintiff settlement regarding illegal strip and cavity searches conducted by members of the Milwaukee Police Department, calling it the “wimpification of the police department. All of a sudden now we cannot pursue cars that are stolen, we cannot check different cavities as far as drugs.” Those comments drew a quick rebuke from members of the council as well as the mayor.

Zielinski has a length history of backing tough law-and-order proposals, as detailed by my colleague Bruce Murphy in a 2014 profile.

More about the Fight over Police Chief Flynn