Over the long period that Henry Maier served as Milwaukee’s mayor, from 1960-1988, probably no issue was more important than state shared revenue to the city. Maier was relentless in lobbying legislators, famous even for attacking Democratic lawmakers from Milwaukee, and was chief founder of a special lobbying group, the Alliance of Cities, to push for more revenue to the bigger cities. (The group disbanded some years ago.)

A new study by the nonpartisan Public Policy Forum (PPF) helps explain Maier’s obsession: his city was uniquely dependent on state aid compared to others nationally. In those days well more than half the city’s budget came from state shared revenue. Even today, after 20 years of declining state aid, the city still gets 48 percent of its revenue from this source, compared to just 18 percent for 38 peer cities analyzed in the study. “General state aid historically has been Milwaukee’s largest revenue source,” the new study notes.

Which is why its huge decline since the mid-1990s is a fiscal earthquake. “If Milwaukee’s intergovernmental revenue… had increased at the rate of inflation from 1995 to 2015,” the study notes, “then its revenue total would have been 58% higher ($415 million versus the $264 million it actually received).” In real dollars that’s a loss of $151 million — a huge hole for a city whose current budget for basic services is $834 million.

Milwaukee has no chance to replace this lost funding with local taxes, because it is uniquely constrained, compared to peer cities. “No other state in the Midwest has a local tax structure like Wisconsin’s that relies solely on the property tax,” the study notes. “Most other cities get about a third of their revenue from a local sales or income tax or both,” but Milwaukee gets nearly 90 percent of its local revenue from the property tax and is prevented by state law from levying other taxes. More recent state laws also constrains how much the city can increase the property tax.

As a result, the study notes, Milwaukee’s property tax increases made up for less than 20 percent of the huge decline in state funding since 1995.

The state’s straitjacket on city taxes, as I’ve written, goes back to when Wisconsin was the first to create an income tax, in 1911 (two years before a constitutional amendment created the federal income tax). State leaders feared “balkanization” of the state — cities competing with each other based on taxes — so the legislature instead promised to funnel back most of the state income tax to municipalities in the form of state shared revenue.

But that’s ancient history by now and state leaders in both parties no longer seem to care about it. There has been a bipartisan trend of lowering state shared revenue for more than two decades now and that has been killing the state’s biggest city and beneficiary of state aid.

Milwaukee, a 2009 PPF study declared “is a city government on the precipice of serious fiscal and programmatic disorder” and “has exhausted the capacity of its existing revenue streams.”

A September 2016 follow-up study found that smart governance, including “successful efforts to dramatically reduce health care costs, stabilize pension contributions, and trim the active workforce” had allowed the city to forestall the fiscal cliff it faced, but did nothing about the long-term structural problem. “The City’s revenue structure – which has been imposed upon it by the State of Wisconsin – remains broken,” the PPF concluded.

Or as the group’s current study, released yesterday, warns: “There has never been a more urgent and better time for City and State leaders to consider whether a revenue structure established more than a century ago still is meeting the needs of Milwaukee citizens and taxpayers.” If not addressed, it notes, Milwaukee’s leaders will not be able “to invest appropriately in areas ranging from the Police workforce, to neighborhood revitalization, to replacement of the Milwaukee Water Works‘ lead service lines.”

The group’s latest analysis — of 38 peer cities — was done both to dramatize how uniquely constrained Milwaukee’s finances are, and to explore possible solutions that have worked in other cities.

While other cities use a wide range of approaches, they tend to have two things in common. First, the use of two or more major taxes rather than just the property tax “they can spread the cost of their expenditures across multiple forms of local taxation and, thereby, maintain lower property tax rates,” the PPF notes, adding that Milwaukee has the second highest “effective” property tax rate of any city analyzed by one national study.

Secondly, other cities adopt a tax that spreads the costs to tourists, workers from the suburbs and others who benefit from city services and amenities. “As cities increase in size, they become more cosmopolitan,” the study notes, “and host greater numbers of non-residents who are engaged in business, employment, tourism, entertainment, etc.” A local sales tax “enables local governments to recoup the costs of services provided to all users irrespective of their purpose for being in the city.” 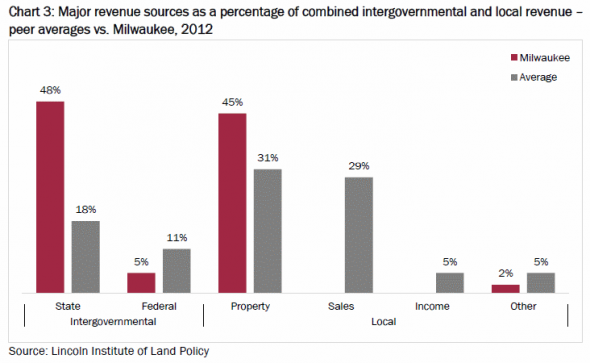 Major revenue sources as a percentage of combined intergovernmental and local revenue – peer averages vs. Milwaukee, 2012.

A local sales tax is the most popular second tax for other cities: on average they get 29 percent of their revenue this way. “Cities with larger populations tend to draw more heavily on the sales tax and less upon the property tax,” the study notes.

But a city like Cleveland has a local income tax, and its officials estimate that 87 percent of it is paid by “people who work in the city but live outside of it,” the study notes. It has also become a way to weather declining state aid: “Cleveland’s mayor cited the City’s annual loss of state revenues as a primary justification for his proposal to increase the City’s income tax from 2 to 2.5%.”

Kansas City has a 1 percent tax on the city earnings of all residents and non-residents, as well as on business net profits. Pittsburgh has a payroll tax it charges all private employers in the city, a local service tax on every employee and a parking tax charged at all public and private parking lots and garages “to ensure that daily non-resident commuters pay for a share of the City services they use,” the study notes.

While the study notes the advantages and disadvantages of any added tax, it’s hard to imagine a city income tax getting approved: it “would be a difficult pill for Milwaukee to swallow given the State’s already high income tax rates,” the study notes.

By contrast, a local sales tax, even as high as 1.5 percent, would still leave Milwaukee with a tax lower than the median for its peer cities. And while a sales tax is regressive, the state exemption on groceries and prescription drugs helps alleviate the problem, while the tax is very effective at charging all users of city services and amenities.

The 2007-09 budget of Governor Jim Doyle would have allowed Milwaukee to levy a 0.5 percent sales tax under the state “Premier Resort Area Tax” statute (which currently allows selective areas, like Wisconsin Dells, to charge this tax). The tax “likely would apply only to a limited geographic area (the Doyle proposal covered a four-square-mile section in and around downtown),” the study notes, but “this approach could begin to move Milwaukee toward revenue diversification” and “begin to tap into Downtown Milwaukee’s impressive renaissance.”

Whether this reform or some other is the best approach, it’s crystal clear that something is needed because the revenue model for Milwaukee is broken and has been for many years, as three separate studies by the sober minded PPF analysts have now concluded. It’s time for the state legislature to recognize the problem and start working toward solutions, as other states have.