And again his math doesn't add up. 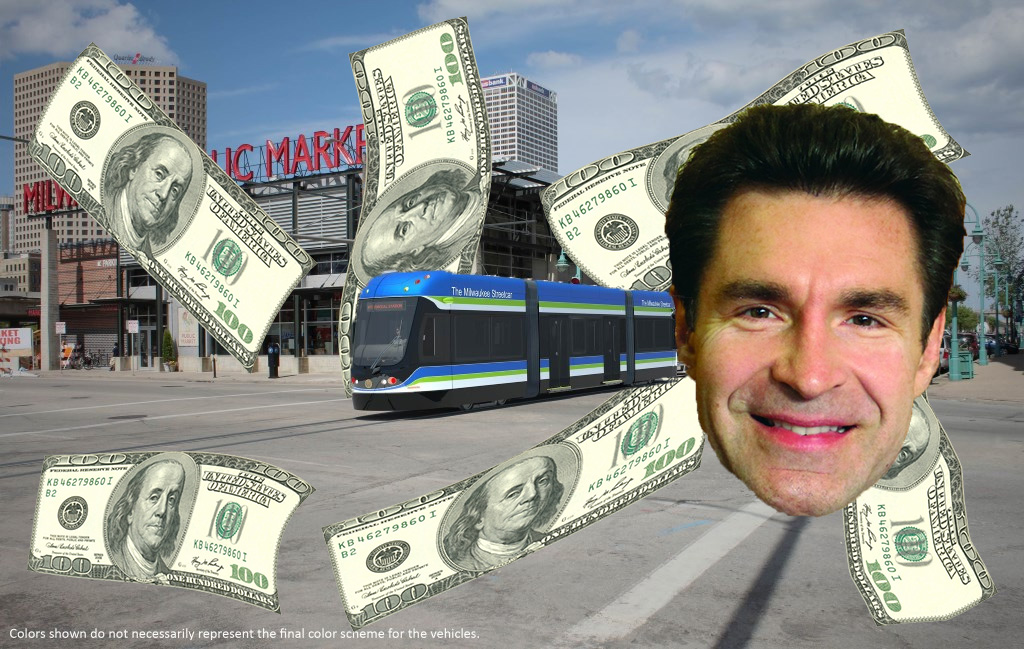 Tony Zielinski and the Streetcar.

Less than a week after he held an anti-streetcar, pro-police offer press conference, Alderman Tony Zielinski was back at it, but his budget math still doesn’t add up.

After spending the last press conference attacking Mayor Tom Barrett and two streetcar-related positions in the budget, Zielinski spent this press conference attacking the mayor and a $315,000 budget allocation from the parking fund to operate the streetcar. The catch? Because of the $10 million, 12-year Potawatomi Hotel & Casino sponsorship deal, these streetcar costs are completely offset by the incoming streetcar sponsorship.

Zielinski will propose amendments to eliminate the streetcar budget items, a move he says will result in only 26, not 33 police officer positions being eliminated. The math on that doesn’t check out though, as eliminating the streetcar-related items would presumably force the project to stop, end the Potawatomi sponsorship and cause the federal government to demand the return of its grant for the streetcar.

In brief, as Zielinski’s plan is currently described, it would not only not save the city any money, but would likely cause the city to receive a large bill from the federal government. No jobs for police officers or firefighters would be saved.

Without sharing any details, Zielinski again reiterated that he has budget amendments waiting to restore the positions of every single eliminated police officer position. He said those amendments would begin to be released in the next week or two.

Has Zielinski talked to the mayor about any of this? “We haven’t talked about it,” Zielinski said.

He went on to state “He can play a wordsmith game and say I meant that no tax levy dollars and this is coming from the parking fund. That parking fund money could be used to reduce taxes or to fund cops or to go to the streetcar.” And while that’s true in the abstract, these specific budget items are offset by a corresponding amount of funding from Potawatomi.

What are these streetcar budget items? The budget includes $208,000 for the creation of two positions related to the city’s management of the streetcar. In addition, $315,000 is included that is required as a 20 percent match for a grant provided by the federal government to operate the streetcar.

The city will eventually need to pay $3.6 million a year to private operator Transdev to operate and maintain the streetcar. That cost will be offset by farebox revenue, the federal grant and sponsorships. The city isn’t anticipating a budget impact from the streetcar until at least 2021, some three years after it begins operations (and Barrett has said the city is still seeking other sponsors). The streetcar, now known as The Hop, is scheduled to begin operation in November 2018.

At the Potawatomi announcement, Ald. Robert Bauman proclaimed “I suspect that once and for all the politics have left this project. There is nothing left to complain about.” He was clearly way too optimistic.

The anti-streetcar press conference used to be the domain of Ald. Robert Donovan, who attempted to use it as a wedge issue in his run for mayor. Is Tony Zielinski doing the same?

“Frankly, I’m troubled and puzzled why it took Alderman Tony “The Backdrop” Zielinski close to four weeks to locate pages 300.2, 310.3 and 480.5 of the proposed Executive Budget to see, in plain and public view, the parking funds set aside to match federal transit dollars. For a fella who sells himself as being fiscally responsible you’d think he would have gone through the budget documents prior to yesterday. But then again, without enough due diligence, he did vote for the Milwaukee County pension debacle. The truth is that the Administration has been very clear that the Potawatomi’s sponsorship of the streetcar diminishes the need to utilize parking fund revenues for the next couple of years and we expect to see various amendments to spend those funds.”