Not good for bikers, and will make other streets less bike-friendly, too. 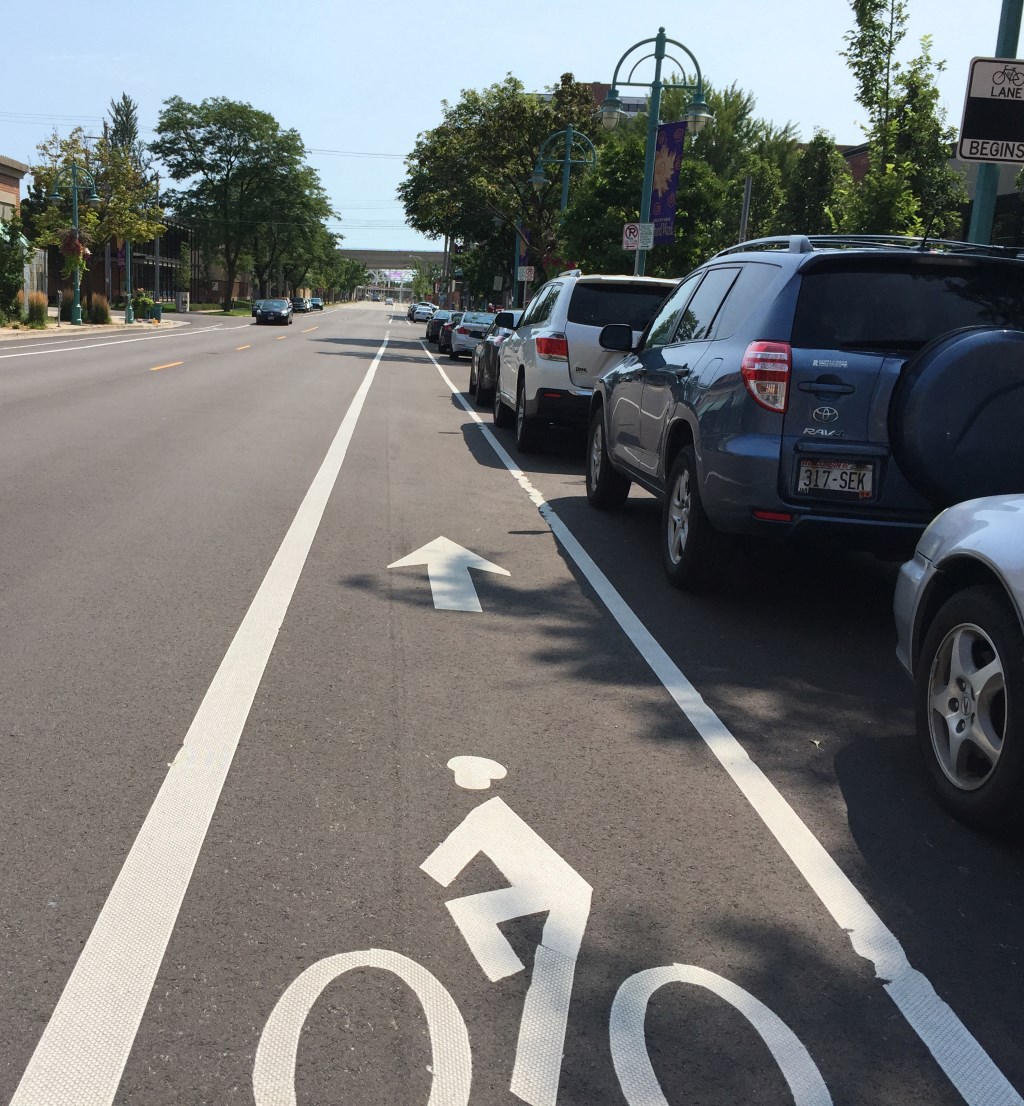 There’s a plan to make a bike boulevard in Riverwest along Fratney Street. Bump outs, mini traffic circles, and speed humps to slow cars down. A worthy goal, for sure.

Hitting a speed hump in a car at 40 mph can bend a strut, blow the seal, or break a ball joint. That will teach you.

But have you ever hit one of these things on a bike? I have. Every cyclist has a story of the tragic consequences of hitting something like a pot hole, stone, or branch on the street. Anything sticking out of the pavement that slows a motorist can be much worse for someone on a bike with thinner tires, no shock absorbers, or a protective steel body. Instead of bending a strut cyclists can break an arm or a shoulder.

Making a street worse for everyone can’t be the answer to how to how to get motorists and cyclists to play well together.

Speed bumps or humps would be a blunder on a bike path. So why are they on a “bike boulevard”?

Because the “bike boulevard” is about automobile traffic —  a response to neighborhood complaints about cars speeding down the street, according to Ald. Robert Bauman. “We have do something rather than nothing,” he told me.

Perversely this “bike boulevard” will divert traffic to the less traveled smaller streets that many cyclists prefer west of the river. North Pierce and Bremen streets are six feet narrower than Fratney, so they have fewer cars to begin with. Small enough so cyclists take a lane for themselves and ride down the middle of the street instead of being pushed over to the side where open cars doors are a hazard.

Does anyone know a commuter cyclist in Riverwest who thinks the bike boulevard is a good idea?

There are lots of ways to ride through Riverwest and not too many cars except perhaps on Fratney Street.

Everyone benefits when a street is an unobstructed thoroughfare with a uniform surface. The smoother the better. Commuter cyclists plan their routes and go out of their way to ride recently resurfaced streets because they are safer and infinitely more pleasurable to ride on — Humboldt, Michigan, Center, Farwell, Holton, and 2nd streets to name a few.

Don’t call this a “bike boulevard.” It’s actually about automobiles — like everything else in America, the only and last civilization on earth built entirely around the automobile.

The United States made 90 percent of the automobiles in the world in the 1920‘s and by 1928 consumed more than three million cars compared to Denmark’s 3,453. A roadside culture sprang up in America to support our love of the automobile. The first drive-in theater and drive-in restaurant were created in  the 1920s, along with the motel and the roadside hamburger stand. The first drive-thru bank cropped up in St. Louis in 1930. The road-trip in art, literature, film, and music is a uniquely American phenomena.

Cars are not another form of transportation, but a form of culture. The American Dream was to never get out of your car.

If every trip on city streets were valued equally it would be perfectly natural for a person in a 3,000-pound vehicle to defer to someone on a 22-pound bike or a 100-pound child crossing the street. Walking three mph or biking 10 mph for 20 minutes rather than driving 65 mph to work is better for the environment and a lot safer. When we bump into someone on the sidewalk we say “excuse me.” On the freeway we call an ambulance, the police, and our insurance company.

Changing the national culture requires leadership and new policies that govern our city streets. Invert the pyramid, give the pedestrians the right of way, then bikes, and cars. But until that happens, we’re better off making smooth streets for two- and four-wheeled vehicles.

Speed bumps are not the solution, they state the problem: The automobile is sewed into the seams of America.

That’s not a design problem. That’s a national mind set, and won’t be altered in the least by a bike boulevard.

42 thoughts on “In Public: Bike Boulevard a Bad Idea”