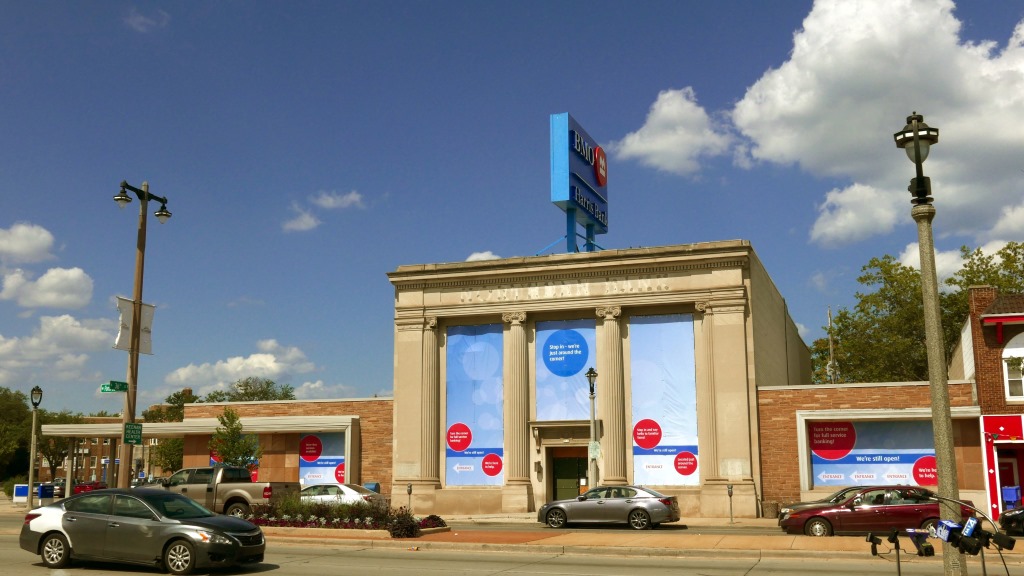 With city financing and a collective investment approach, developers plan to redevelop a prominent burned out building on W. Fond Du Lac Avenue damaged during the Sherman Park unrest in August 2016.

The building at 3536 W. Fond Du Lac Ave., to be known as the Sherman Phoenix, has stood for more than ninety years and was was formerly a BMO Harris Bank branch. But developers Juli Kaufmann, of Fix Development, and JoAnne Sabir, plan to make it a commercial building for at least 12 local businesses. BMO Harris has since broken ground on a new site on Fond Du Lac Avenue opposite its former branch location. 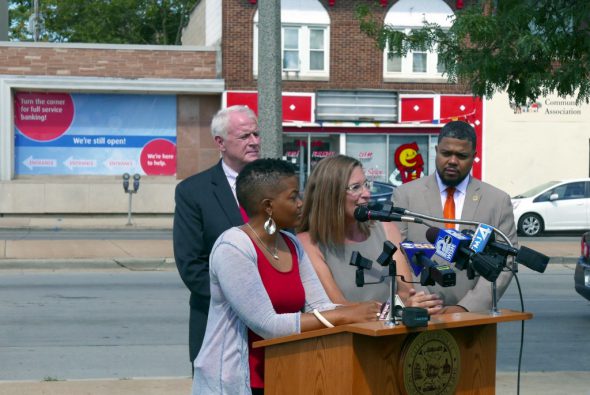 JoAnne Sabir and Juli Kaufmann with Mayor Barrett and Ald. Rainey in the background. Photo by Graham Kilmer.

Local alderman Khalif Rainey noted that it’s nearly a year since the “chaos” and “destruction” that occurred in the neighborhood. He recalled wondering, the night of the riot, “Where do we go from here?” This development, he said, is the answer to this question.

The developers said the collective approach they are taking ensures the project doesn’t become a project for outside investors and instead caters to the community. Kaufmann said, “To have real estate on their own main street, to say that is mine and I’m building wealth in my own community.”

Sabir, a co-owner with her husband of Juice Kitchen at 1617 W. North Ave., said, “This work is really a response to the desires of the hearts of our neighbors.”

Twelve businesses will lease space in the building. All will be local and black owned, and are expected to employ about 45 people from the neighborhood. They are: The Juice Kitchen, Funky Fresh Spring Rolls, Embody Yoga, Sabir’s Karate Center, Hello Beautiful, RSVP Confections, Queens Closet Consignment Shop, #DreamsNeverExpire!, Sister Locs, Rees Barbershop, Studio 69 and Buffalo Boss.

“Over the years tenants have come to us at the juice kitchen so that inspired our desire to know that there are entrepreneurs here that need a little bit of support and need a space,” Sabir said.

Along with the private financing for the project, the city has proposed a new Tax Incremental District (TID) to spur on development of the building. “It’s really gonna be the catalyst that allows this to go forward,” said Mayor Tom Barrett.

The tax incremental financing (TIF) generated through the TID will put $225,000 toward the new project, with the possibility of an additional $100,000 in grants for improvements, “in and around the project,” according to a press release from the city. This is the eighth TID the city has created in the last two years.

The TIF, Barrett explained, is a mechanism that allows the city to capture dollars from an increase in value on a property, that will happen over time, to put toward and, “Help jump start or implement a development.”

“I think we use it judiciously,” said Rocky Marcoux, director of the Department of City Development, of the TIF mechanism for public financing of private projects. “We try to make sure that the taxpayer is getting the maximum advantage. Frankly, I don’t know how you find a better investment than what we’re doing here.”

Marcoux said the TID should signal to potential investors the city’s commitment to the project and the area, and potentially help the development team raise the additional funds.

After the violence that racked this neighborhood last summer, the city had to get creative in figuring out how to invest in neighborhoods, Rainey said.

So, Rainey is excited to see the product of all the investment from the city and the community.

“I can’t wait to hang out in that spot,” he said. “Eat some wings. Go to the yoga class. Have some juice.

Asked if he does yoga, Rainey said, “I don’t do yoga, but I’ve never lived in such close proximity to a yoga spot either. I might have to figure it out.”