After a marathon public comment session the City Plan Commission voted unanimously Monday in favor of a zoning change required by a new large mixed-use development in Bay View.

The $25 million six-story development at 2130 S. Kinnickinnic Ave. would have 144 residential units and 15,000 square feet of commercial space, and is viewed by its supporters as a bold project and a boon to local business, but its detractors worry about how it will affect parking in the neighborhood.

The project is on the corner of S. Kinnickinnic Ave. and E. Bay St. It’s being developed by Tim Gokhman of New Land Enterprises. After Monday’s vote at the plan commission the project goes next to the Common Council’s Zoning, Neighborhoods & Development Committee.

The northern end of the building, which will be seen as drivers enter Bay View heading south, draws inspiration from the nearby site of the long-gone, historic rolling mills. Architects have incorporated shades of orange and blue in a “large curved facade” to reference the visuals of rolling steel, said Wilhelm.

Even as the project moves toward securing the zoning change it needs, many of the concerns and praise heard at past public meetings continues. And the conversation has become a debate between two competing views of Bay View.

There are those who see the project as another change to historic Bay View, who seem to value the status-quo over growth and its potential effects, good or bad. Then there are the residents that see the project as a symbol of the things they cherish about today’s Bay View, like a thriving commercial district, a variety of business and retail and the ability to attract and create new Bay Viewers.

The nearby residents that spoke in disapproval of the project Monday were in the minority, but all mentioned parking as a concern. Many complained there’s already inadequate street parking in the neighborhood around Kinnickinnic Ave.

Jeff Raasch, a local resident who circulated a petition against the project, said “Parking is probably the biggest concern for everybody.”

Plans for the building would dedicate nearly the entire second floor to parking, with more than 180 spaces. City code only requires about 90 spaces for a building of this size. And many of the project’s supporters that live and work in the area say parking is not as big an issue as some suggest.

The developers, area alderman Tony Zielinski and the majority of speakers at the meeting, however, lauded the project as a fine architectural statement for this gateway to the Kinnickinnic commercial corridor.

The project has yet to see disapproval from any business owner voiced at a public meeting, likely thanks to the increased density and foot traffic the project would bring to the area — something nearly every owner said the corridor could use.

One local business owner put the need for the project in starker terms. Mike Bodow, co-owner of Crafty Cow on Kinnickinnic and a member of the Kinnickinnic Business Improvement District, said he thinks neighborhood development might operate similarly to the restaurant business in that, “You’re either growing or you’re dying.”

For Bodow, the project is key to the future of Bay View. “What we’re doing is trying to grow the neighborhood,” he said “For people like me who plan on living here forever. I’m 32, I want to live here forever.”

Lee Barczak, chair of the Kinnickinnic Business Improvement District (BID) and owner of the Avalon Theater, said even with rising investment in the commercial corridor, BID members frequently hear from residents that they want and need a greater variety of businesses.

“We see the necessity of additional residential density,” he said.

Nearby residents that don’t support the project also mention traffic on Kinnickinnic and the height of the building. Raasch said the new building would be “towering over our neighborhood.” Several others said it would create a “canyon effect” going down Kinnickinnic Ave.

Gokhman responded to this concern, noting that for “gateway” projects like this the city encourages developers to go bigger — with a site zoned for a 60-foot-tall building to build up to 70 feet. He added that tall buildings tend to slow traffic down.

Zielinski called the project “one of the most important and exciting” in Bay View. As for the naysayers he said, “If we listened to everybody that was opposed to any project we’d have nothing happening in Bay View.” 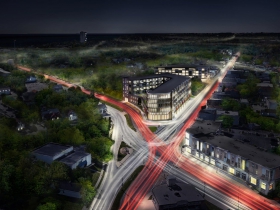 More about the Gateway to Bay View