A huge mixed-use development slated for Bay View continues moving forward, though its neighborhood opposition seems determined to fight to the bitter end.

The $25-million project at 2130 S. Kinnickinic is being developed by New Land Enterprises and will sit on the corner of Kinnickinnic Avenue and Bay Street, where the defunct Hamburger Mary’s sits. It’s planned as a six-story apartment building with 14-15,000 square feet of retail on the first floor, nearly 140 apartment units and 180 parking spaces on the second floor for residents.

Its developer Tim Gokhman told the Common Council’s Zoning, Neighborhoods & Development Committee Tuesday that the number of apartment units planned has been dropped from 140 to the high 130’s with some one-bedroom units being consolidated into two-bedroom units.

The project, which would likely generate about $700,000 in annual property tax revenue according Gokhman, will include an arcade along the first floor retail, which should effectively widen the sidewalk in that area. A wider sidewalk is naturally more friendly to foot traffic. That’s another plus for the local business community that has supported the project for the increased density it will bring to the neighborhood.

The project is moving forward, with the committee recommending adoption of a rezone and land sale before them Tuesday, but some residents continue to plead with officials to stop or scale back the project. The project enjoys, by all accounts, unanimous support from the business district, and many residents in the area. At the core of the opposition is the desire to preserve the quiet neighborhood feeling that many Bay View residents cherish. But as the debate over the project has unfolded some potential unintended consequences of the resistance — which could make Bay View less affordable and the neighborhood less green — have been revealed.

The complications begin with opponents’ complaints about a lack of parking. At every public meeting, nearby residents have complained that an increase in population density will cause a crisis of parking. Gokhman emphatically disagrees: “Not to get too detailed into my philosophies on parking, but it is my belief that in the long-run this property is over parked,” he said.

With 180 parking spaces for residents the building has about 1.25 parking spaces for every unit. The ratio well exceeds standard city zoning regulations. There’s also a nearby surface lot that Gokhman plans to rent for retail customers. And Ald. Tony Zielinski announced he’s working on having New Land purchase vacant land adjacent to the building to create yet another parking lot.

Another concern that arose Tuesday, and has been common at public meetings, was the affordability of the units. One individual wondered whether there would be affordable housing units in the building. There will not. But affordability is something the development would actually address, even if only tangentially.

Gokhman and New Land own and operate properties all over the city. And something they’ve noticed, he has said, is that vacancy rates are incredibly low around the city and Bay View is the only market in the city that never dipped under pre-recession property values.

In short, without a proper supply of new housing, rents will rise. And Bay View’s historically strong property values may climb ever higher as demand for housing in the south-side neighborhood grows.

Vanessa Ramos, a Bay View resident, wrote to Zielinski asking him to oppose the project, saying that development in the commercial corridor is ruining the close-knit community she moved to 12 years prior. But in asking Zielinski to oppose the measure, she noted that the property taxes on her home have been increasing. “I understand that development is also a benefit to the economy but this is not helping my family and our continued increases in real estate taxes,” she wrote.

The development has been trudging through the rezoning process because the plans call for a larger building than the site is currently zoned for. But as a gateway project, at the northern mouth of Bay View and its business district, its normal for a site like this to be up-zoned, city officials have said. 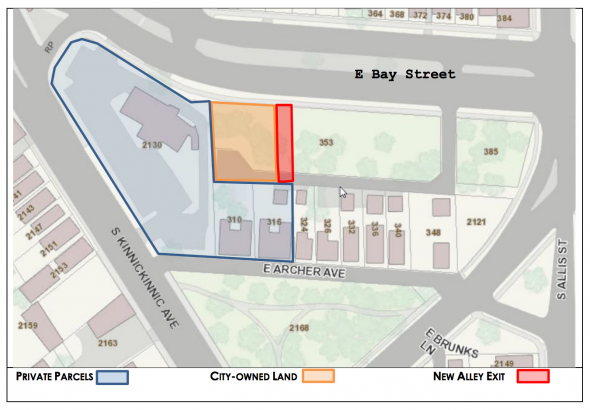 Lot 353 is the area Ald. Tony Zielinski is proposing to sell to the developer for parking.

Along with the rezoning, New Land is buying a piece of a city-owned property just east of the development site. It will be used to connect an alleyway running between E. Bay St. and E. Archer Ave. The land between the alley and Bay Street is what Zielinski is proposing to sell to the developer for parking.

A petition has circulated in the neighborhood collecting signatories opposed to the project. Jeff Raasch, who started the petition, told the committee when neighbors signed, “I think the top reason is the overflow of traffic from the commercial space,” and also said, “We’re also very appreciative of the green space that is there.”

The development of this plot of land looks like an unintended consequence of the opponents parking alarmism. Rasch said the residents are appreciative of this green space, and he’s right, many residents have said as much at previous meetings. Some at an early public meeting even mistook the land for a public park.

“That is left-over property that was created when Bay Street was widened in 1957.” said Yves LaPierre a real estate analyst with the Department of City Development. “It’s not parkland it’s just surplus for the city.”

Now, much of the green space could be lost to a surface lot with Zielinski working on selling the land to the developer, in order to assuage community furor over parking for the project’s renters.

One resident, Stephanie Toumanoff, wrote to the Common Council saying, “I vehemently urge you to stop the development… which has no parking included for its costumers [sic] or visitors, and will claim and destroy a much appreciated green space with mature trees.” Toumanoff went on to say the development, “Will ruin our neighborhood.”

Zielenski has been trumpeting the message throughout the rezone process that community resistance to development in the commercial corridor will make it harder to protect the area’s cherished neighborhoods and green spaces. Developers are responsive to the idea that the neighborhoods should be protected from large developments, Zielinski says, but they won’t be for very long if they can’t build in commercial areas.

“If we don’t support projects that actually help and promote KK, and we’re not contributing to the tax base, it’s gonna make it much more problematic for me to preserve green space in the residential areas such as that five acres that I want for a skateboard park and other recreational activities.” The five-acre site Zielinski is referring to is the former Army Reserve site that the alderman supported developing as recently as two years ago.

This small, but potentially emblematic green space next to the development could be the first collateral damage of Bay View’s development resistance.

More about the Gateway to Bay View