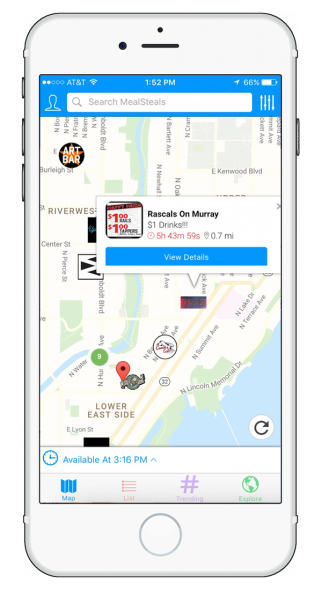 Brian Kopp’s original idea for a new app was one to show the basketball junkies where any basketball pick-up games were going on in the area. Fun and useful, but with a limited audience.

Then Kopp and his business partner Ben Bourgeois decided to go another route. “We thought wouldn’t it be awesome to convert this idea to a broader audience,” Kopp says.

And what’s broader or of more universal interest than food. And even better, if it’s discounted?

Which led to the creation of MealSteals, an app to give “real time deals.” The app shows current deals on food and drinks from restaurants, food trucks and bars in the user’s vicinity. MealSteals even has “flash steals” for deals that are only a one-time thing. And a countdown timer shows how much time — 12.1 hours, 3.6 hours — before the deal expires.

Much like Uber and Yelp, the MealSteals has a map which displays restaurants and bars near the user’s location that currently have a deal or discount special happening.

“We built it for us,” Bourgeois said. “I still use it all the time.”

Bourgeois is a bartender who studied software engineering at Milwaukee School of Engineering and has pursued a bachelor’s degree in marketing from UW-Milwaukee. Kopp is a nurse at Columbia St. Mary’s Hospital.

There are now more than 200 businesses that use MealSteals. Bourgeois and Kopp take it upon themselves to add the deals to the app for each business. But any business can choose to take over their account and then they decide what deals go onto the app. There’s even an option to give a deal only to customers who show the business the deal on MealSteals.

The app is available through iTunes and Google Play. Kopp estimates that 4,000 to 5,000 people to use MealSteals. Milwaukee is where most of their users reside but the app works in Waukesha, Wauwatosa and Brookfield.

To get people to hear about the app the owners have used social media, one-on-one conversations and a “super successful” poster campaign, as they describe it. When the Pokémon GO app was popular, they put their posters up at all Pokémon GO stops.

But Bourgeois and Kopp have gotten their best exposure from the media.

MealSteals is a free app for users and business owners—Bourgeois and Kopp are trying to find ways to make a profit. Eventually, they hope to hire staff because running an entire app can be time consuming. Adding ads to their app seems like the next step, but they must be “local ads that add value,” Kopp says. They don’t want meaningless ads taking up space, but ads the customers would enjoy.

Bourgeois and Kopp have take on a few interns from the UWM and MSOE to help them with the business.

If a business owners want to know if MealSteals is benefiting their business, they can contact Bourgeois or Kopp and ask for their analytics.

MealSteals has reached Chicago and they’ll be doing their hard launch very soon.

This app has been in development for two years and Bourgeois and Kopp hope to see it flourish as the days go on. As Kopp puts it, MealSteals is like a “digital sidewalk sign” — for as little as one hour there’s a deal and then its “wiped away.”

And soon replaced by another delicious — or intoxicating — deal.