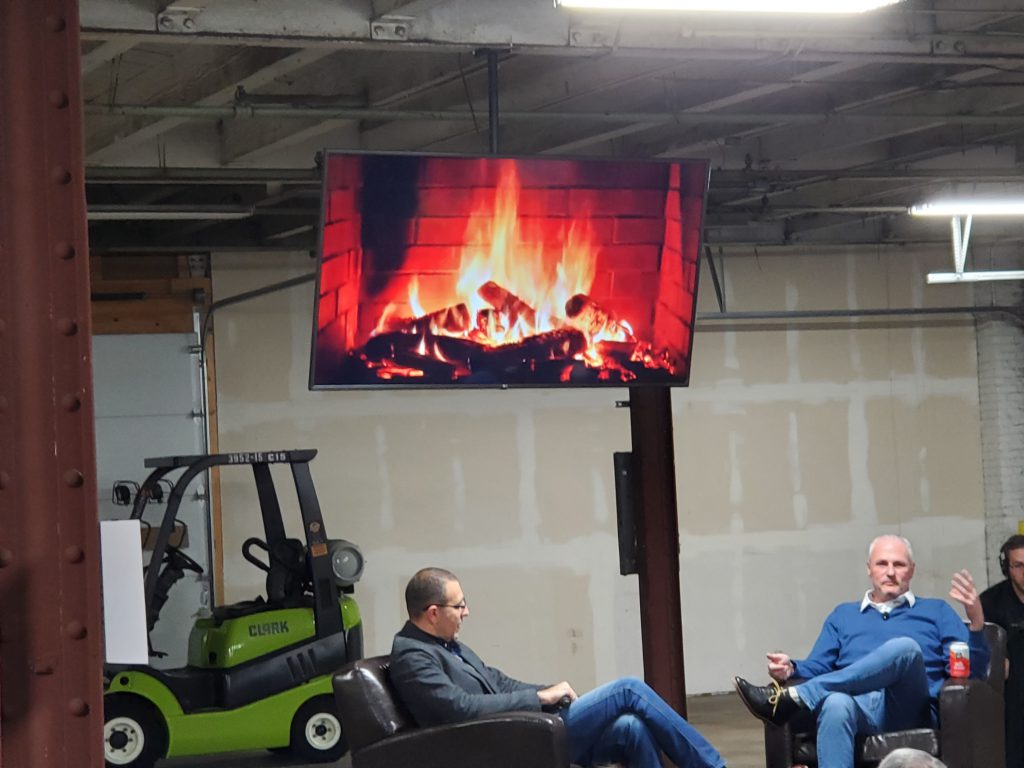 When he graduated from UW-Madison, entrepreneur Glenn Reid bid adieu to the Dairy State and headed to the west coast, assembling a resume that included working under Steve Jobs.

Now he’s back in his old stomping grounds.

Reid, who was one of Adobe’s first 40 employees and later went to work at Apple, more recently launched Marathon Machines — a startup he describes as “laundry in the Internet age.” Since its founding, Reid transplanted the business from Silicon Valley to Milwaukee, working out of a former warehouse building at 1825 W. St. Paul Ave.

The entrepreneur on Wednesday discussed his professional story and why he wanted to return to Wisconsin during the most recent installment of a periodic series known as MKE Product Brew.

Roman Geyzer, director of product at LearnVest and Northwestern Mutual, initiated the sit-down fireside chat, held at Reid’s business. The conversation also was part of the broader menu of Startup Milwaukee Week offerings that have taken place throughout the week.

Economics was one of the reasons Reid cited for transplanting Marathon Machines to Milwaukee. On average, he said real estate in Silicon Valley is 12 times more expensive than Milwaukee, based on rental costs per square foot. In some instances, premiere space in Downtown Palo Alto is 27 times more expensive, he said.

The St. Paul Avenue warehouse now serving as the hub of Marathon Machine’s operations, located directly across from a Milwaukee restaurant mainstay — Sobleman’s — has long been underutilized.

But from the get-go, Reid said he saw untapped potential for his new operating space — which, he said, merely needed a little TLC. The same, perhaps, could be said of Milwaukee and its startup culture.

“I love old buildings,” Reid said. “We visited this building, I think, three different times. No one has been in this building as a tenant, as far as I can tell, for decades.”

After re-acclimating himself to Wisconsin, Reid said he is optimistic about Milwaukee’s role in fostering innovation in the years ahead.

Geyzer, who relocated to Milwaukee, offered a similar assessment of the city during the conversation.

“For me, personally, I’ve been in Milwaukee for a little over three years,” Geyzer said. “I’ve seen a tremendous amount of growth.”

While there has been progress in fostering innovation in Milwaukee in recent years, there have been cultural and philosophical impediments, Reid said. Geyzer asked him what it would take for Milwaukee to have startup growth on a scale of a city such as Austin, Texas.

All of the ingredients are already here,” Reid said. “You have smart people, you have the universities. But culturally, you don’t give yourselves permission to do something stupid.”

In other words, Reid said, there historically has been a risk-averse culture within Milwaukee and a tendency to seek approval before venturing out and taking a chance on an idea.

The conversation also touched on what goes into product design — a concept Reid experienced first-hand while working for Jobs and creating the first versions of iPhoto and iMovie.

“Steve Jobs never stopped doing things,” Reid said. “He was a product guy, a product manager. The drive to do products is something that gets in your blood.”

Product testing, Reid said, is one of the most important first steps in the exploratory process. The concept, he said, plays out in such TV series as “Shark Tank.”

“I’ve always thought of products as kind of a relationship with the customer,” Reid said. “If you build it, someone’s got to want it or be able to use it.”

One thought on “Why Marathon Machines Moved Here”