How Bad (or Good) is Hammes HQ Design?

Is it urban or suburban, Jeffersonian or Reaganesque? The debate has already begun. 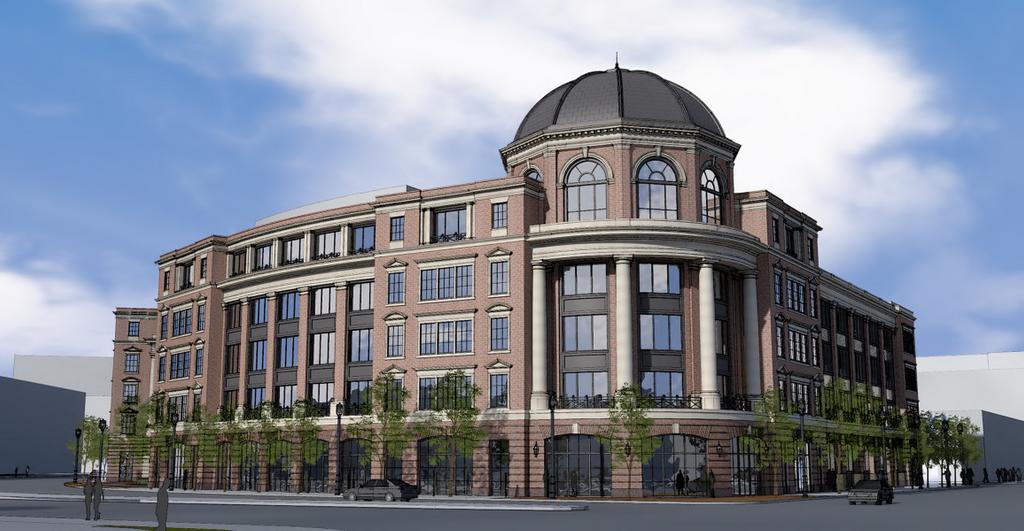 Hammes Company unveiled a plan to move their headquarters and 80 employees to downtown Milwaukee from Brookfield on Friday with zero taxpayer support. Mayor Tom Barrett was all smiles when he announced the news at a press conference in a currently vacant lot at 210 E. Knapp St. That site would be turned into a five-story, 94,000 square-foot building, of which Hammes would occupy about a third and lease out the rest.

None of that is controversial, but Hammes’ design choice might be. Instead of the standard modern corporate headquarters building that is effectively a glass box, Hammes is proposing a building in the classical style. The new building would have more design similarities to Northwestern Mutual‘s 100-year-old headquarters than their new tower.

My opening line in describing the design in a Friday column was that “armchair critics of Milwaukee architecture are going to have to rip up their playbook for this one.” They delivered like clockwork. Within a hour of publishing the column the comments started  rolling in. The first, from “Chris”, didn’t pull any punches: “I’d just assume they stay in Brookfield if they’re going to build this deranged, faux-historic nightmare.” The second was simply “I agree with Chris.” Only 25 percent of the comments expressed approval for the design. Those in opposition ranged from calm (“not my cup of tea…”) to aggressive (“an architectural abomination…”). One commenter thought it looked like a Las Vegas bank, another a suburban bank. One critic, before praising the project from an economic impact standpoint, called it “one of the ugliest buildings I’ve ever seen.”

The comments at the press conference couldn’t have been more different. Barrett offered nothing but praise. Alderman Nik Kovac, who represents the site at the north end of Downtown, called it a “classic, strong masonry building.” He went on to salute the integration of the 360-stall parking garage. That’s no small complement, as Kovac gives his annual “the good, the bad and the ugly” tour of downtown parking garages as part of Doors Open Milwaukee. 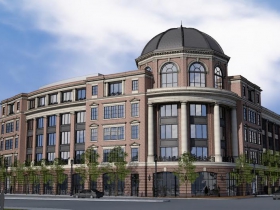 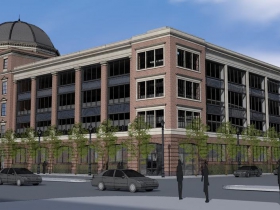 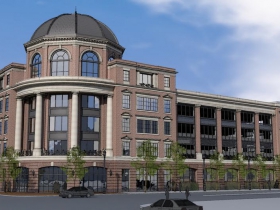 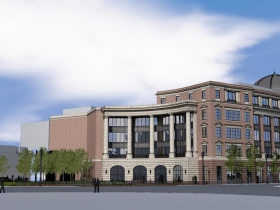 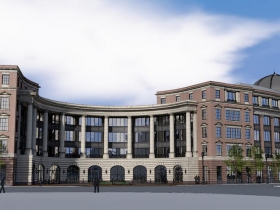 Beauty is in the eye of the beholder, but urbanism is all about ground-level. From that standpoint is this a truly urban design? The answer appears to be yes.

While final plans are not yet available, the renderings show a building that succeeds in adding to the walkability of the area in a number of ways. Unlike the suburban building the firm will be leaving, the new building will be built entirely to the lot line, a key tenet of urban buildings. The first-floor is not to be a blank wall looming over pedestrians, but activated space. Jon Hammes, the firm’s founder and managing partner, noted during a question-and-answer following the press conference that the first-floor will be leasable space for commercial use.

The building satisfies another key tenet of urban design by hiding the parking at the rear of the site. This sacrifices N. Market St. to be a street solely for automobiles, but that was a foregone conclusion the minute the city approved the MSOE parking garage. The building also is sufficiently tall that, when combined with the other buildings going up to the north, it should start to create a “living room effect.” N. Water St. will begin to feel more like a place worth being in, and less like the Park East Freeway it was originally built to replace. Where the building fails is ironically the part Hammes himself seems most interested in: the motor court and front door. It’s set back from the street and a clear concession to the automobile.

Ultimately, the already controversial design appears to be more urban than the other downtown building Hammes is a part of, the new Milwaukee Bucks arena. Hammes himself is a participant as a minority investor in the team and his firm is via a consulting gig with the Metropolitan Milwaukee Association of Commerce, and the building has an absolutely excellent eastern facade as far as the pedestrian is concerned, but is virtually dead to the street on the remaining sides (See: How Urban is Bucks New Arena?). And yes, that design is also controversial.

Jon Hammes told me that his design inspiration stems from being a student of U.S. history and a fondness for the work of Thomas Jefferson. There might be more at play, though.

Hammes, 68, worked for years at Trammel Crow Co., a real estate firm based out of Dallas that formerly had a significant presence in Milwaukee. Hammes was a partner at the firm before starting his namesake firm in 1993. While he’s been hugely successful on his own, it appears he might be borrowing design inspiration from his past with Trammell Crow, or at the very least, an architect.

Crow acquired the former Parkland hospital in Dallas in 2006 and set about redeveloping the property. Centered around the former hospital, which was built in Jeffersonian-style, the firm has developed a number of new buildings in the same style. They’ve also added something they call “The American Experiment,” which their website prominently promotes and describes as “a permanent reminder of the historic ideals of limited government, individual rights and the rule of law. Together, these principles tell the story of a free, self-governing people who must renew their commitment to ordered liberty with every new generation.” If the politics of that message aren’t clear, one of the new buildings is named Reagan Place.

This is apparently quite appealing to Hammes, who served as the co-chair of Governor Scott Walker‘s presidential campaign, as he located one of his firm’s 10 satellite offices in the Dallas complex’s Commonwealth Hall building. He also hired the Old Parkland master planner (and exterior architect of Reagan Place), Dalgliesh Gilpin Paxton Architects, to design his Milwaukee headquarters.

The proposed building does require a zoning variance, which gives the city substantial design control over the building. Will they take advantage? In reality, they already have. The renderings we’re seeing today come after nearly three years of discussions between Hammes and the city. Kovac described the process as “a conversation, not a negotiation,” suggesting things haven’t been contentious between the two parties. With the mayor expressing his support for the project, the Department of City Development is certain to express their support for the project during the zoning hearings. And as the neighborhood’s alderman, Kovac’s support for it is also crucial.

The project is proposed to go before the advisory City Plan Commission on November 7th, the Zoning, Neighborhoods & Development Committee on November 21st and the full Common Council on November 22nd. Kovac sits on ZND, so the project has at least one vote there, but it’s hard to see any member of the council voting against a project that brings jobs, a basically urban form and no requirement for a city subsidy. That’s far too many reasons not to support the project.

Will critics in the community be able to swallow a design they don’t like for the tax base, jobs and growth it provides? Or is the building doomed to be as controversial as, say, di Suvero’s The Calling at the eastern end of Wisconsin Ave? Perhaps, but I suspect we’ll all be happy for the growth of Milwaukee the building represents.

20 thoughts on “Eyes on Milwaukee: How Bad (or Good) is Hammes HQ Design?”