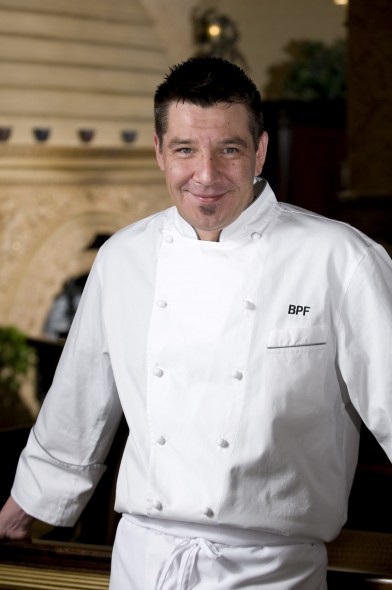 Brian Frakes, Executive Chef at the Pfister Hotel, believes in the importance of passion. You might say it’s integral to his job. Twinned with passion is the perfection he expects to see on every plate that comes out of each of the four kitchens at the Pfister. “We are only as good as the last plate we served,” he says. “My staff is passionate about what they do.” He gestured toward a group of senior citizens at a nearby table. “Look at the group over there. Their eggs had to be perfect. Their hash browns had to be crisp.”

Frakes respects the importance of his job at the Pfister, a hotel he speaks of as a Grand Dame, a hotel that’s been an anchor of civility on Wisconsin Ave. for 124 years. “Some of my guests’ grandparents were married here.” He knows guests pay a little more for the hotel’s historic amenities and thus have high expectations for the food they are served. “Every day we have to exceed those expectations,” he says.

Because many guests have been coming for decades, certain menu items are sacred. “For example, Tuna Salad Sandwich, a signature lunch favorite, remains on the menu because it’s part of the Pfister’s legacy.”

His passion for every aspect of a chef’s life can be summed up in three words, serve, create, deliver. “It’s a life of service,” he says.

He pauses before explaining that his staff aren’t just delivering food, but are creating memories, whether the dish is the Tuna Sandwich or Loch Duart salmon belly.

At this point he excuses himself briefly from our interview in the Café. “Guest related,” he explains. This is a very busy man who on this particular day has a banquet group of 350 on the 7th floor who will be served chateaubriand in chocolate veal reduction, a dozen Green Bay Packers staying at the hotel who need some extra attention, and a kitchen busy preparing hors d’oeuvres for Gallery Night.

When he returns, I ask, “What is the hardest part of your job?” The answer comes as no surprise.

“With four kitchens I have to be in a lot of kitchens at the same time. I have people I can trust working for me, 50 cooks, supervisors, and chefs.”

That’s a lot of juggling of his time, but Frakes is a person who enjoys the pressure. “Things can get emotional,” he says. “I like to think of myself as Michael Jordan with the ball in the 4th quarter. Put it on my shoulders.”

He learned to love the back-of-the-house pressure in high school when he washed dishes in a chicken wing restaurant. That’s where his chef career started and after that, he never left the business. In one year he worked his way up to head wing man or as he says, “Alpha male.”

Born in Milwaukee, he moved to South Florida, picked up a degree in psychology, continued to work in restaurants. “I caught the bug,” he says. In West Palm Beach he took a job at the Boca Raton Resort and Club as a banquet cook in their five-star restaurant. A whole new world opened up for Frakes: the white jacket, the chef’s hat, the world of fine dining. Soon the baseball cap worn backwards disappeared and in its place, proper chef’s attire. He worked at the Club for eleven years and rose through the ranks from banquet cook to Executive Chef.

“I didn’t go to culinary school. I worked my ass off, came in early, stayed late, got yelled at, paid my dues. You don’t come out of school with a set of shiny new knives and step into the role of Executive Chef.”

As a former Milwaukean and lifelong Packers fan, Frakes did not hesitate when he was offered the job as Executive Chef at the Pfister. He’s been back now for 10 years. Living on the East Side and married with children, he has a few favorite local restaurants, Ardent on Farwell, Café Corazon in Riverwest, and for his family, carry-out empanadas from Cubanitas. His children, seven and nine, like to go to Ma Fischer’s for breakfast because his seven-year-old daughter is obsessed with the pancakes or as Frakes imitates her, “Panna cakes. We go once a week, usually after church.”

“In the kitchen, there’s no substitute for life experiences,” he says and proceeds to tell me about the time he and a partner were working solo when the kitchen drain exploded. At the same time all the power went out. This happened when he was in high school. “We were young and foolish and up to our shins in something disgusting. Instead of closing, we found flashlights and carried on. Would I do that today? Hell no, I would close the restaurant.”

A recent family road trip took him to Tennessee and Kentucky. Frakes says when they travel they look for the “creaky door” or in other words, get off the beaten path, get lost, often on purpose.  On this recent trip they focused on barbeque and found it everywhere, not ordinary bbq, good bbq. He’s also willing to try bad food because, “If I eat everything then I learn why people who love it, love it. I can learn from that food too.”

He’s making up dishes in his head all the time. At the Pfister he likes to stay on top of trends. Over the years he’s learned to go with the food he thinks the guests will prefer. When he plans a new menu he gets his staff involved. He won’t force a new menu but instead runs specials to test the waters. He shares a couple options for future meals: Guanciale risotto with truffle, parmesan reggiano, and celery oil; Scallop thermidor; and Bucheron brule with honey fried cracker and Chardonnay fig reduction.

Frakes has a lot to be proud of: He was the Wisconsin Restaurant Association Chef of the Year in 2015, he has 20 former employees who are now executive chefs, and he cooked his way from alpha male wing man to Executive Chef at the venerable Pfister Hotel.

He is proud to be friends with many talented Milwaukee chefs and to be a part of a local food culture that’s on the rise and finally gaining national recognition.

Those early years of the baseball cap worn backwards are over, but Frakes still has that passion to serve, to create, to deliver.