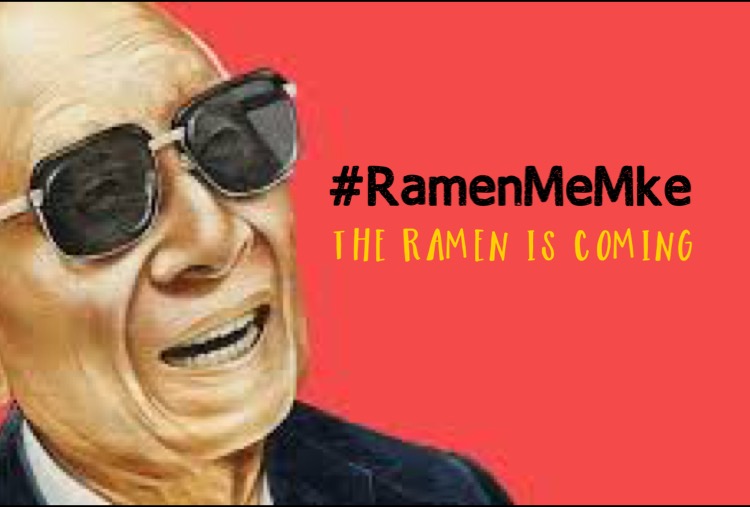 Yokohama 1910: The Ramen is Coming

Two of the owners of the Spanish restaurant Movida in Walker’s Point now plan to open a ramen restaurant. Yokohama 1910, as it will be called, will be located at 1932 E. Kenilworth Pl., the former site of Yield bar, which closed in late May. Movida owners Aaron Gersonde and Andrei Primakow, (who also goes by Andrei Mikhail) have sought a license to run the restaurant, including a full liquor license for the restaurant, and hope to open by September. The two have other plans as well, as Carol Deptolla of the Milwaukee Journal Sentinel reports:

Yokohama would be about eight blocks from another ramen restaurant, Red Light Ramen, which operates late Fridays and Saturdays, after hours in the Ardent dining room at 1751 N. Farwell Ave.

The former Agave Southwest Bar & Grill location at 800 N. Plankinton Ave. in downtown Milwaukee will now become a restaurant called Brunch. As the name suggests, Brunch will offer the downtown crowd another choice for breakfast starting this month. The new restaurant’s menu has yet to be finalized, but  Carolynn Buser of OnMilwaukee.com did add some details:

Brunch will be open between 7 a.m. and 3 p.m. and offer breakfast and brunch. It will be led by Executive Chef Joe “JJ” Glisch, formerly of Sanford, AP Bar & Kitchen and Ale Asylum Riverhouse.

Glisch shared with our Lori Fredrich earlier today that “We are really excited. Plans have been in the works for the past few months.

Morgan Sampson, wife of Michael Sampson of Swarmm Events, is the owner.

A beach house located at 100 E. Hawthorne Ave. in Grant Park will now be home to a new concessions area. Ferch’s Beachside Grille will offer burgers, fries and frozen custard. Alongside the food options, the venue will also offer a variety of craft beer and wine. Ferch’s will be opening on Thursday, June 9 at 3:30 p.m. with a ribbon-cutting and keg-tapping ceremony. Lori Fredrich of OMC adds more:

In addition to burgers and custard, the oasis will offer beach chairs and umbrellas, kayaks and paddle boards for rent as well as numerous entertainment options. Adding to the sand-volleyball leagues begun by Cities & Sports Social Club in 2015, the Ferchoffs will coordinate ping-pong, beach games, musical entertainment and special events at the beach.

The area will also be available to rent for private parties. Ferch’s Beachside Grille will be open seven days a week from 11 a.m. to 9 p.m. through Labor Day.

The menu is bar food, essentially, but it uses ingredients such as pork from Berkshire hogs and oversized cheese curds from Carr Valley; the restaurant has its own pastry chef.

The 24 taps will include about a dozen seasonal beers that will rotate. At the opening, the bar will have a Berliner Weisse by Professor Fritz Briem that can be ordered mit Schuss — with a shot of one of three syrups to sweeten it. The bar also will tap 53207, a California Common by Milwaukee’s Enlightened Brewing.

Although not official, it looks like Southridge Mall will be getting a brewpub. There is still some paperwork to be done, but The Explorium Brewpub is on track to open by the end of the year. Mike Doble of Vernon is an engineering consultant and building designer who has lived in Milwaukee since 1998. Kathy Flanigan of the Journal Sentinel adds more about Doble’s background:

The well-attended event, Downtown Dining Week, continues through June 9. Participating restaurants throughout the downtown area are offering lunch for $12.50 and dinner for either $25 or $35, depending on the location. Diners will receive Feeding America Eastern Wisconsin donation cards with their bills this year. The donations will help feed children during the summer months when they may not have access to free or reduced-price school meals. Deptolla lists the participating locations:

See the week’s menus at milwaukeedowntown.com; note that not all restaurants serve both lunch and dinner.

SURG co-owner Michael Polaski said in a written statement, “With the changing times, SURG has decided that this is an opportunity to focus on other areas and continue to improve our positions.“

The lease was expiring, and SURG opted to not renew it… The group’s other restaurants include Carnevor, Distil and the newly renamed Mi-key’s Modern BBQ.

Hom is the group’s restaurant that focuses on comfort foods and Wisconsin products, such as a cheese and sausage board, breaded walleye and chicken pot pie.

Hom opened in October 2013, a change in concept from the previous SURG restaurant on Blue Mound, 8-Twelve MVP Bar & Grill.

The restaurant inspired by the flavors of Argentina and Brazil is now closed at 241 N. Broadway. The owner, Ana Docta, said the restaurant closed because of flooding in the lower level of the Broadway Central building. Kasana offers fresh and organic food that is free from hormones, GMO and antibiotics. Docta plans to relocate Kasana to a new space, but meanwhile she continues to cater and plan events during the relocation process.