Following over a year of negotiations with We Energies regarding utility relocation, the city and company have reached an agreement that includes $6.5 million in savings on the Milwaukee Streetcar project. We Energies has submitted an agreement to relocate all of their affected steam, gas and electric lines at a cost of $15 million. The city had originally budgeted $21.5 million for this work.

Will that result in a $6.5 million reduction in the city’s costs for the project? It’s “too early to say” according to Ashley Booth, planning and technical services director at HNTB. While the savings are “obviously a positive advancement” for the project, Booth said during a meeting of the Joint Committee on Downtown Streetcar Implementation, there are a lot of moving parts that could change things for a project up to three years from completion. HNTB is leading engineering work on the project for the city.

The agreement with We Energies only includes the first phase of the streetcar project, a 2.1 mile route that runs from the Milwaukee Intermodal Station to the Lower East Side. Relocation costs on the approved lakefont spur will have to wait, as the city is only at 30 percent engineering completion on that line. The budget for the lakefront spur is set at $29.2 million, including utility relocation. Utility costs are expected to be substantially less for the lakefront line due to the lack of current development in that area and the north-south alignment of the We Energies steam system.

Where did the $6.5 million reduction come from? The biggest savings were from route adjustments. The streetcar was originally planned to run along E. Wells St. from N. Broadway to N. Van Buren St., but will now run along E. Kilbourn Ave. instead. In addition, a north-south split along N. Jackson St. and N. Van Buren St. has been scrapped, in favor of running everything on Jackson St. Eliminating Van Buren St. avoids a large steam pipe of We Energies.

The city intends to sign the agreement with We Energies in the coming weeks. Further agreements will be needed with additional private utilities, including AT&T, following route adjustments prior to the project’s final approval. Those costs are estimated at less than $2 million and are included in the existing project budget. In addition, work is substantially complete on the relocation of city-owned Milwaukee Water Works lines. That work is coming in at budget at a cost of approximately $1 million.

Should the savings ultimately materialize, the city would be the beneficiary. The federal government’s share of the first phase of the project is firmly committed at $54.9 million, with $14.2 million coming from an additional grant for the lakefront spur. The federal grant for the lakefront spur increased the project budget, as the city had conservatively estimated to only receive $10 million from Washington.

Through January, approximately $10 million out of the $128.1 million project budget has been spent.

Seeking clarification around what he characterized as “lying”by others on the matter, alderman Robert Bauman asked Booth about any increase in project cost relating to the recent court ruling that the city is liable for any private utility relocation costs. Booth, ever cautious, wouldn’t say that others are “lying” but did say there was an impact of “zero dollars” on the project budget. Bauman was clearly referencing alderman and mayoral candidate Bob Donovan, who had claimed the ruling would increase costs. For more on this issue and the associated lawsuit, see my February 15th column.

Last News Before the Election

In a clever twist, the streetcar task force won’t meet again until after the April 5th election. The next regularly scheduled meeting of the Joint Committee on Downtown Streetcar Implementation was to be in two weeks, and the only big news expected by then is the notice that the city is soliciting bids on construction work. That means Mayor Tom Barrett‘s last major announcement regarding the Milwaukee Streetcar project will be a $6.5 million savings in private utility relocation. 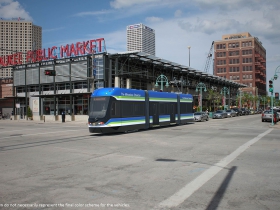 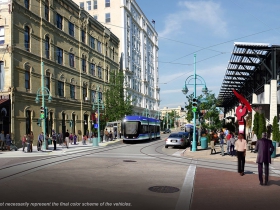 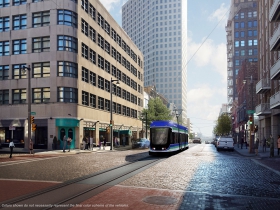 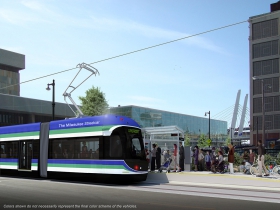 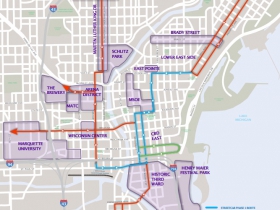 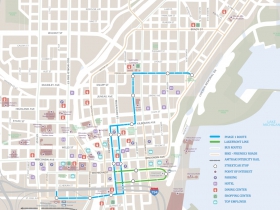 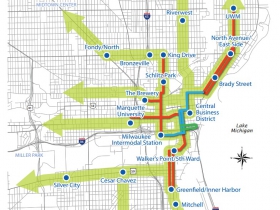 A federal congestion mitigation and air quality grant will pay for 80 percent of the operating costs for the first 18 months, with a possible 18-month extension. Operating costs will be covered by farebox revenue, advertising, corporate sponsors and the parking fund. Operating costs are estimated at $2.65 million annually. Service on the first phase of the system is on-track to begin in early 2018.

6 thoughts on “Eyes on Milwaukee: $6.5 Million in Streetcar Savings”