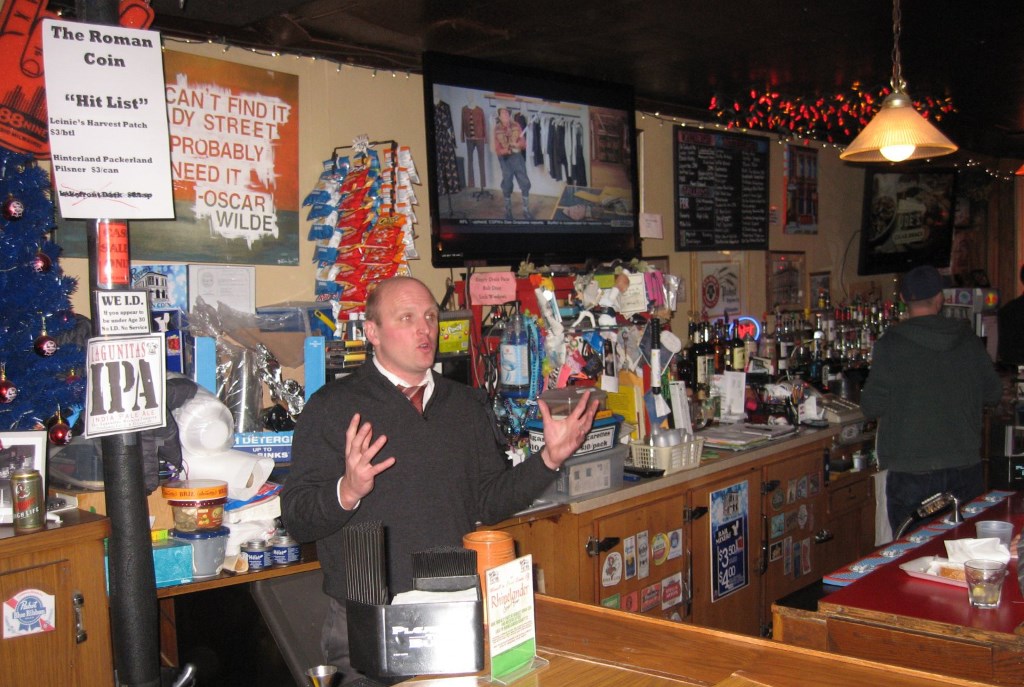 Tomorrow is the primary election and politicians are madly trying persuade every voter and grab every campaign dollar they can.

Third District Alderman Nik Kovac filled the house at Regano’s Roman Coin, 1004 E. Brady St. for his “Support Nik on Brady Street” fundraising event Thursday, February 11th. This was a politically charged evening in Milwaukee, as the festivities were timed to end before the beginning of the Democratic Presidential debate held in this city later that evening.

Kovac faces challenges from Shannan Hayden and Ira Robins, a private detective who worked on the high-profile Laurie “Bambi” Bembenek case and has moved from Elm Grove to enter the race. The colorful Robbins faces various unpaid tax warrants as I’ve reported.

At the fundraiser, Kovac spoke of the issues that face his district. A huge concern has been the influx of carjackings and other violent street crimes in the district, particularly east of the river and near the UW-Milwaukee campus. Kovac said the level of crimes has been increasing and the age of the offenders decreasing. Authorities simply can’t ignore violent behavior on the part of young people, yet at the same time sending violators to Lincoln Hills where they themselves become victims doesn’t seem like much of an answer, he said. Kovac said the issue will require coopertation with the state, and even with the federal government. The root cause, he feels, is education.

Kovac has some great retail streets in his district, he said, rattling them off — Brady Street, Downer Avenue, North Avenue, Farwell Avenue and Center Street. People are still disappointed about the disappearance of the Brady Street hardware store, he said, adding that at least we will get a good new restaurant out of it.

“So do me a favor,” he said to the crowd. If you like local retail, “quit shopping at Amazon!” Let my people shop!

Scene at the Event

The front desk was staffed by Grace Fuhr, who was assisted by Philip Chinn. Both are involved with Historic Milwaukee, Incorporated. Kovac was joined by his Alderbrothers Ashanti Hamilton and Jose Perez. Yance Marti of the Department of Public Works (DPW) was there, as was Tina Klose, who lives in the surprisingly ghost-free (she thinks) Brady Street home of the late Frank “Pepperoni Cannoli” Pecoraro. Nor has she found any money stuffed under the floorboards. I told her I’d be happy to come by with a pickax just to check and make sure, but she did not immediately warm to the idea.

The food at the event was imported from across the street and provided by Mike Glorioso. It included delicious tortelini, a lovely fresh salad, cheese, bread and other highly meritorious snackables, washed down in buckets of Lakefront Brewery Fixed Gear and other beer provided by the campaign. The food was served on handmade earthenware platters and bowls produced by the hostess, Teri Regano. Mike Glorioso also appeared at the event. Valentine’s Day is a special one for the entire Glorioso family, since it was on February 14th, 1946 that Joe Glorioso opened the Italian Market that bears the family name. The 70th anniversary was to be celebrated all weekend said Felix Glorioso, Joe’s son, who was minding the shop while his cousin socialized across the street.

Jeno Cataldo was also at the event, along with some business partners. Demolition has begun on the 1950 building at 1650 N. Franklin Place that had been a Boy’s Club, and then later Jesus’s Soul Saving Travelling Mission of the Apostolic Faith. He plans to use the old cornerstone in his new building planned for the site — after checking out the cornerstone’s contents, of course. Cataldo says he is still working the building proposal through the alderman’s office, which probably means it is bouncing around DCD somewhere.

Kovac’s father Peter Kovac and mother Thea Kovac were at the event supporting their son. Eight years ago the elder Kovac hoisted a huge sign at the foot of the Holton Bridge early election morning encouraging folks to vote for his boy. Kovac Jr. has had a bit of a sign problem himself, for meddling with that of an opponent last week.

Tim Kenney, who is running against newly minted Alderman Mark Borkowski in the 11th District was also among the attendees. He has called Borkowski “arrogant” for being the only alderman opposed to an initiative by the Milwaukee Youth Council to create a restorative justice program for teen age non-violent offenders. The Youth Council members are getting a dose of Realpolitik early in their political careers.

Bob Monnat of the Mandel Group came by to spread his cheer and to drop off a check, as did Alaa Musa of Brady Street’s Casablanca. Jean Kies made her way on the judicial path. She is running against Walker appointee Michelle Havas in one of the two contested judicial races on the ballot. Sara Geenen, who ran for the assembly seat vacated by Jon Richards and now held by Jonathan Brostoff, showed up at the event, just a block or so from her home. A similarly small commute was made by Steve Filmanowicz, who ventured across the street from his N. Astor St. home to take a break from the birthday celebration he was enjoying with his family. Howard Leu of the Walker’s Point Center for the Arts and a former Riverwest neighborhood association president, was there, anticipating by a day his birthday.

Dennis Grzezinski lamented the current state of environmental affairs in Wisconsin. The attorney, now in public practice, served on the Milwaukee Metropolitan Sewerage District for years and has been involved in the Urban Ecology Center and other activities. He said in the old days (pre-Walker) environmental decisions were based on science, with the political parties battling out the proper level of parts per billion for pollutants. Now the science has virtually been neglected and nobody can agree on much of anything. The MMSD has somehow managed to stay above this fray, and has been able to get bipartisan support for its purchase of wetlands and other off-source water treatment lands. 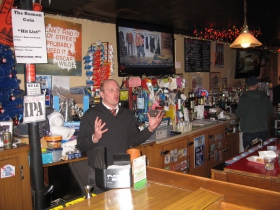 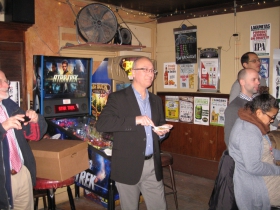 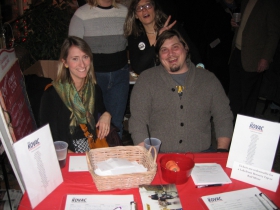 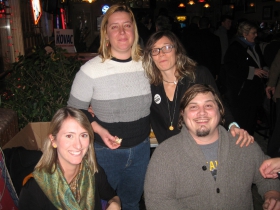 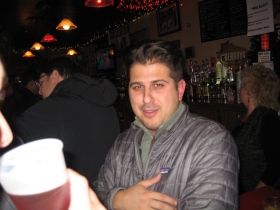 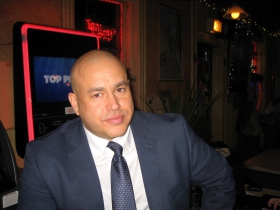 Following the Kovac event, I headed to Lakefront Brewery for a Debate Viewing Party. The place was packed with supporters of Hillary Clinton and of Bernie Sanders, plus those who may be uncommitted. The debate was broadcast on a large screen set up on the stage, and the bar was staffed for those of a thirsty nature. The Dems brought in a special guest to fire up the crowd. It was R. T. Rybak, the mayor of Minneapolis from 2002-2014 who is the Vice-Chair of the Democratic National Committee and has spent the past couple of years stumping for candidates and getting out the vote. He appeared in Milwaukee in 2015 at a Greater Milwaukee Committee event covered by Urban Milwaukee. 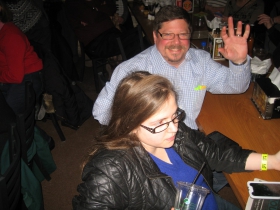 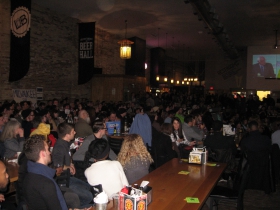 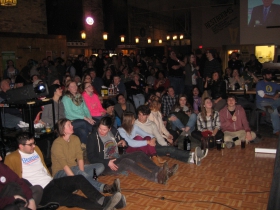 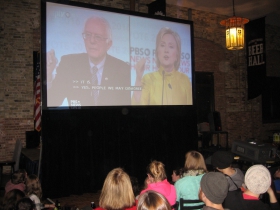 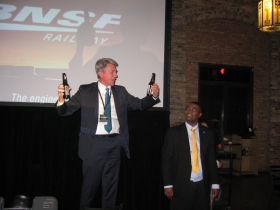 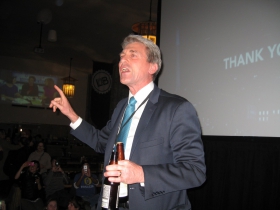 2 thoughts on “Plenty of Horne: Kovac Raises Money for Reelection”