Why Is Minnesota Outperforming Wisconsin?

Does having a Republican or Democratic governor explain the difference?

Recently President Barack Obama gave a speech in Wisconsin jabbing Gov. Scott Walker by noting how much better Minnesota’s economy is doing, which brought objections from Walker’s supporters. There’s no question that Minnesota has outperformed Wisconsin’s during the past five years. The question is why. Does a comparison between the two neighbors actually tell us anything about the relative effectiveness of the Democratic and Republican parties’ economic policies?

Let’s start by looking at the two states’ major measures of economic performance between 2003 and 2011. Between 2003 and 2011, Wisconsin’s governor was a Democrat and Minnesota was a Republican. In 2011, party affiliation flipped: Wisconsin elected Walker while Minnesota elected Democrat Mark Dayton. (Where available, the numbers used here start in January 2003 and end this spring. In some cases, the period covered is shorter, either because of delays in publishing recent numbers or because a series started after 2003.) 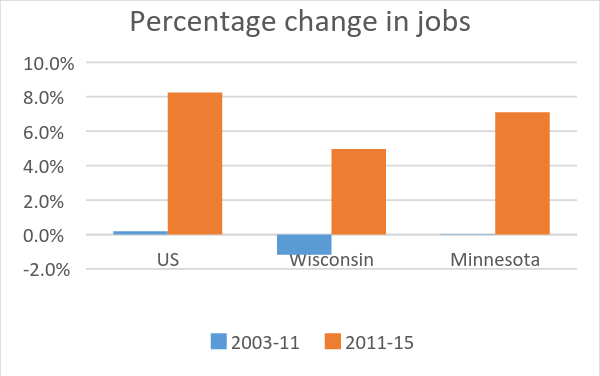 The job numbers have received the most attention, in part because Walker made jobs a centerpiece of his first campaign, promising to create 250,000 new private sector jobs. The first graph shows the percent change in jobs in the two states and the US both before 2011 and since then.

Given that the earlier period (graphed in blue) includes the economic collapse of 2008, it’s not surprising Wisconsin and nation both saw jobs decline (Minnesota had zero change during that period, with no decline or growth in jobs). In the years since then, 2011-2015, the economy was rebuilding, but both Minnesota and the nation led Wisconsin in gaining jobs. 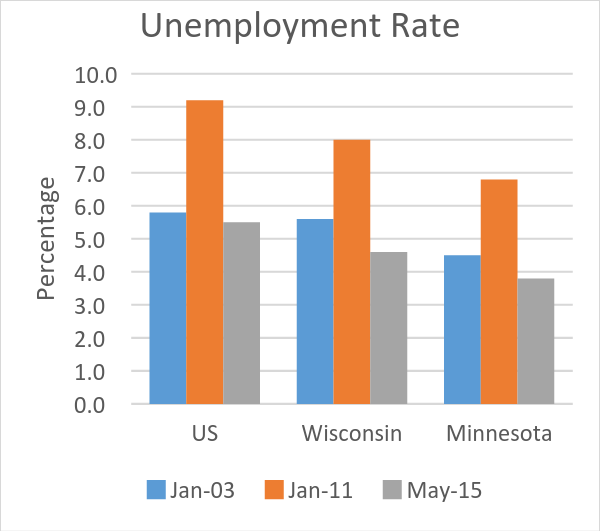 Boasting that Wisconsin’s unemployment rate is below the national average, Walker neglects to mention that it was already lower when he took office. Minnesota’s rate started lower than Wisconsin’s and has continued to decline since.

The unemployment rate is a double-edged statistic: its decline can either reflect good news or bad news. It is good news if the decline reflects formerly unemployed people finding jobs. However, there are other ways the unemployment rate can decline. One is that unemployed people get discouraged and stop looking for a job. Another is that they leave a state looking for a job. Either of these will result in a decline in the work force. 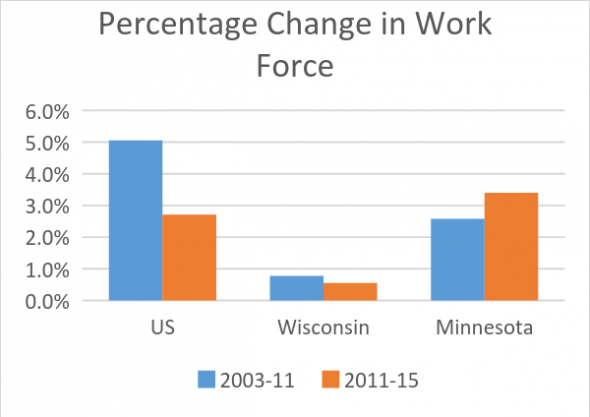 The next chart shows the percentage change in the work force in Wisconsin, Minnesota, and the US. Wisconsin’s small increase compared to nationally and in Minnesota suggests the decline in unemployment may largely stem from unemployed people leaving the Wisconsin work force as opposed to finding jobs.

The Walker administration is often guilty of spinning bad news into good news. For example, the headline on the press release for April jobs numbers said: “State Unemployment Rate Declines to 4.4%, New Post-Recession Low.” This sounds like good news. However, it actually stemmed from two pieces of bad news. Both the size of labor force and the number of people employed were down. Because the labor force declined more than the number of people employed, the unemployment rate went down. (In May’s report it jumped back up to 4.6 percent.) 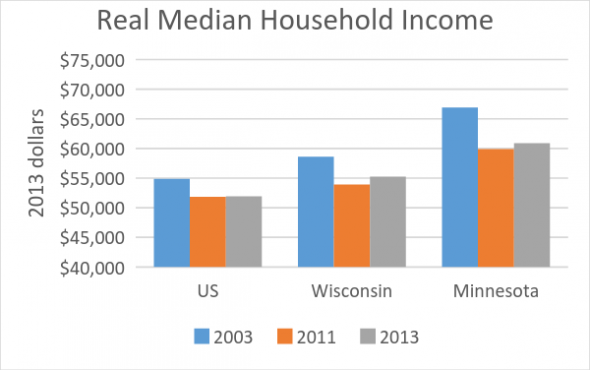 The next plot shows average wages (this data series started in 2007). At first blush, it contradicts the data on household incomes. Even during the recession, average wages rose. Perhaps this reflects that during a recession the low-wage, low-skilled workers were the first to be laid off, leading to a rise in the average wage.

When it comes to wages, In contrast to household income, Wisconsin lags not only Minnesota but the national average.

What can we conclude from these comparisons? 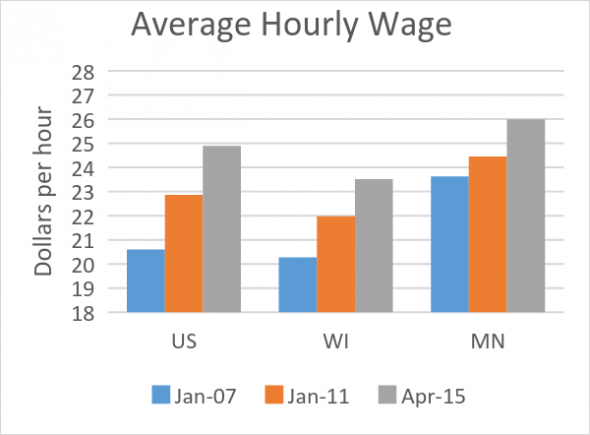 First, it is important to caution that comparisons between states are fraught with difficulty. States differ in numerous ways and it extremely difficult to isolate a single cause. These difficulties are compounded with a sample size of two.

Second, it seems clear that Minnesota has managed to develop a more resilient economy than Wisconsin. In every measure it out-performed Wisconsin both during the recession and since. The reasons for these differences are worth serious discussion.

Third, the data offer no support for conservative insistence that Walker’s policies have improved the Wisconsin economy or that Dayton’s, including raising taxes and increasing the minimum wage, have hurt Minnesota’s. By the same token, the data suggest caution for those over-enthusiastic liberal organizations hoping to use the two states to prove the superiority of their preferred policies.

Yet if the economic benefits of the Walker strategy are, at best, undemonstrated, the costs are not. The costs include less environmental protection, lower funding for education at all levels, lower wages and benefits for Wisconsin workers, and a more regressive state tax and spending system at a time when there is growing concern about economic inequality. A policy with demonstrable costs but unproven benefits strikes me as a bad deal.

Underlying the Wisconsin-Minnesota comparison is the question of how much government—embodied by people like governors or policies like right-to-work–are responsible for economic results. While advocates on both sides play the government-centric card when it fits their interests, the idea that government policies explain everything has taken particular hold on the right. We see this in claims that Democrat Jim Doyle was responsible for Wisconsin’s lagging economic performance during the boom years before the recession and in Walker’s promise to create 250,000 jobs in his first term. This government-centric viewpoint underlay the bogus claims that a right-to-work law would create more jobs, based on the difference between states with and without such laws.

In Wisconsin, no organization has more enthusiastically supported the government-centric viewpoint than Wisconsin Manufacturers and Commerce. It promised that adoption of its program—including relaxing environmental regulations, adopting a right to work law, eliminating taxes on manufacturers, and cutting taxes and spending—would bring prosperity and jobs.

Faced with the Wisconsin-Minnesota performance gap, the WMC president Kurt Bauer published a column in the Journal Sentinel that abandons the government-centric position. Instead he points to numerous other differences which could explain the different performances including a better educated population, the concentration of population, major companies, state government, and the major campus of the state university in the Twin Cities, and that the Twin Cities lost out on the Great Migration of people moving north to work in factories.

To support his argument, Bauer refers to a March Atlantic Magazine article, The Miracle of Minneapolis: No other place mixes affordability, opportunity, and wealth so well. What’s its secret? by Derek Thompson. He neglects, however, to mention Thompson’s answer to this question:  “the answers appear to involve a highly unusual approach to regional governance, one that encourages high-income communities to share not only their tax revenues but also their real estate with the lower and middle classes.”

Rather than learn anything from the divergent state performance, Bauer insists that with time the Walker policies will be vindicated: “any history professor worth his or her salt will tell you it is far too early in Walker’s tenure to determine how his pro-business reforms have impacted Wisconsin’s long-term economic competitiveness.” He insists Walker’s “better Wisconsin business climate will lead to a better Wisconsin economy” and that “the opposite is true for Minnesota” because of policies implemented by Gov. Dayton.

Empirical evidence can lead to better solutions—but not if it is treated only as grist for a pre-determined position.

36 thoughts on “Data Wonk: Why Is Minnesota Outperforming Wisconsin?”