The Bogus Claims on Right to Work

When it comes to research on the economic effects of “right to work” (RTW) laws, there are two kinds. One is serious academic research; the other is advocacy research. They have nothing in common.

RTW refers to state laws that prohibit companies from signing contracts that require employees to pay a share of the cost of union representatives. Ironically they place conservatives in the odd position of arguing for more government intervention in the private sector.

Serious academic research aims at isolating the effects of RTW from the many other differences among states. It generally takes one of three forms:

Analyzing economic changes following a state’s adoption of RTW. This assumes that other factors in the state don’t change. Opportunities for this kind of study have been limited by the small number of states that adopted such laws recently. Most of the laws were passed in 1947— or shortly afterwards–when the Taft-Hartley act allowed states to ban so-called “union-security” agreements that required unionized workers to contribute to unions. Other than Michigan and Indiana, which I discuss in a previous article, the most recent states to pass RTW legislation were Oklahoma (2001) and Idaho (1986).

Comparing the number of manufacturing facilities in counties along the border between states with RTW and those without.

Building bigger and bigger regression models in hopes of separating all the other factors besides RTW that might affect a state’s economy.

One mark of the serious studies is they come with caveats. As the author of research comparing counties in states with RTW laws with their neighbors across the state line cautioned, “Right-to-Work states historically have pursued a number of other smokestack-chasing policies, such as low taxes, aggressive subsidies, and even, in some cases, lax environmental regulations.” As another example, the authors of a major analysis of Idaho before and after RTW passage report that union membership declined and manufacturing growth accelerated compared to its neighbors. However, they add “we are cautious, however, in associating the increase in manufacturing growth with the passage of the law.” Similar cautions appear in the other academic research papers.

A report from the nonpartisan Congressional Research Service summarizes the situation:

National RTW proposals are often discussed in the context of the economic performance of states that have adopted them. However, research that compares outcomes in RTW and union security states is inconclusive… 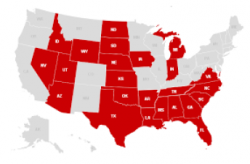 Difficulties associated with rigorously studying the relationships between RTW laws and various outcomes are likely to continue to make it difficult to generate definitive findings about these relationships. As such, the ongoing debate on RTW may be driven by factors other than rigorous empirical evidence.

A glance at the map above suggests one problem with trying to separate the effect of RTW laws from other quirks of the states. The distribution (red states have passed RTW laws) does not look like one you’d expect if states were chosen using random sampling. RTW states are found in the South, the Great Plains and Rocky Mountains. None are on the West Coast, the Northeast, or, until the recent passage in Indiana and Michigan, the industrial Midwest.

Because the economies of the southern states have been so different from RTW states in the West, I will look at the two groups separately. 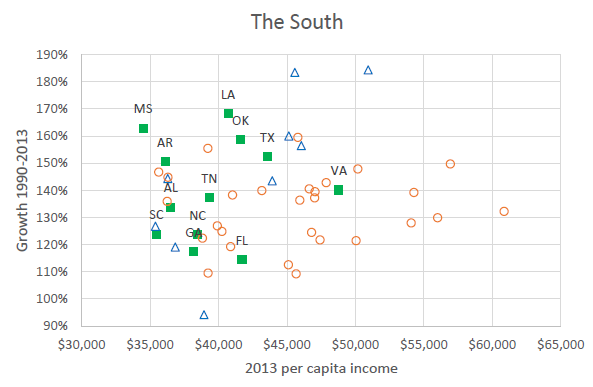 In 1947, when most southern states adopted RTW laws, most had legally required segregation. Since then the legal segregation edifice was dismantled, allowing these states to more fully participate in the national economy. In many southern states, desegregation was accompanied by increased investments in education.

Despite their growth in per capita income, southern states are still at the low end for this among all states and still seem to be playing catchup.

The Plains and Mountain RTW States

This is the group that is most diverse economically. At one extreme is North Dakota which has seen huge growth in incomes stemming from its Bakken oil fields (requiring a much larger vertical scale on the graph). At the other end is Nevada which saw a decline in per capita income (these are in nominal dollars meaning the real decline was much worse).

States in this region generally have small populations and are often dominated by one or two industries, making their results volatile. Several that have done well historically are in danger due to declining oil prices. 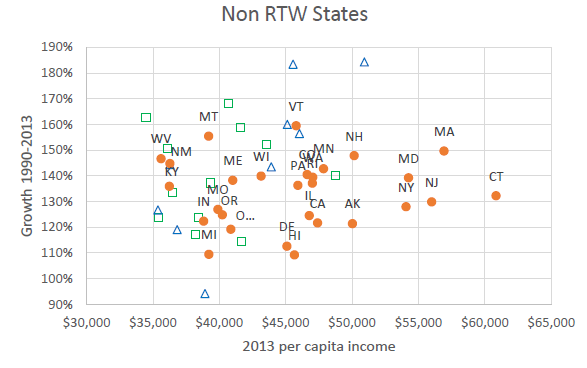 As a group, these states have somewhat higher income but lower growth than either group of RTW states. It is perhaps telling that Indiana and Michigan, the two states that recently adopted RTW, are at the low end of the non-RTW states in average income and the growth of income.

Other statistical measures support these generalizations. Southern states have the lowest mean income and the lowest standard deviation suggesting that there is a commonality among them. The Western RTW states have the highest growth and the highest standard deviation of growth, reflecting their volatility. (I did not weight these calculations by populations). The southern RTW states are growing faster than the non-RTW states, but at the present rate it would take 50 years for the southern states to catch up in income.

Caveats that researchers include in their examination of the individual states both suggest that one should be very cautious in predicting the effect of RTW laws.

This caution is not shared by the advocacy studies issued by conservative think tanks in states considering RTW legislation. A report titled Right to Work is Right for Oregon is typical of the genre. It includes an annotated bibliography of some of the major RTW research (mixing in several advocacy pieces) and even includes some of the cautions the authors of these papers expressed.

Yet when it comes to predicting the effect of RTW legislation on Oregon the report’s authors throw caution to the winds. Among their many claims is that Oregon would have 110,000 more people working in 2021 if it became a RTW state. While they are vague on their methodology they seem to have arrived at this conclusion by comparing the average growth rates over the past 70 years of RTW states with states without RTW.

Similar reports have been issued by conservative think tanks in other states considering RTW, including Indiana and Oklahoma. We should anticipate one for Wisconsin laying out with great certainty the number of additional jobs we can count on if RTW is passed in Wisconsin. You might think the failure of Scott Walker’s promise to add 250,000 jobs in his first term would bring about more caution in bold predictions, but that doesn’t seem to be happening.

A taste of what we can expect as Wisconsin heats up is found in a recent op ed by Scott Manley of Wisconsin Manufacturers and Commerce in the Milwaukee Journal Sentinel. Manley starts out by invoking the freedom argument, ignoring the fact that, whatever its merits, RTW represents a government restriction on contracts between private parties. He then cites comparative growth figures between RTW and non-RTW states, without ever mentioning the issue of causality. Next he claims that effective wages are actually higher in RTW states. His authority for this claim is something called the National Institute for Labor Relations Research. Despite its very neutral-sounding name the group exists for the sole purpose of promoting RTW; its web site describes it as “a non-profit research facility analyzing and exposing the inequities of compulsory unionism.”

The WMC seems much less motivated by what is good for Wisconsin’s economy than pure ideology.

6 thoughts on “Data Wonk: The Bogus Claims on Right to Work”